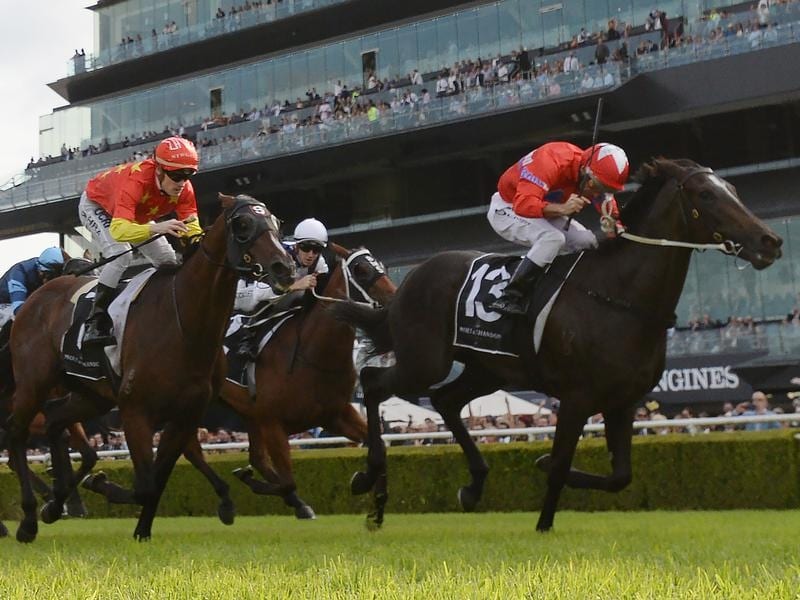 Mick Price isn’t sure if Seabrook can turn the tables on last-start conqueror Verry Elleegant and deliver him consecutive wins in the Vinery Stud Stakes, but he has taken measures to give her a fighting chance.

The Caulfield trainer, who won the corresponding race 12 months ago with Hiyaam, has taken blinkers off Seabrook, a ploy he hopes will help her relax and run out the 2000 metres.

Seabrook raced in a handy position when she was overpowered by Verry Elleegant on a heavy track in the Phar Lap Stakes (1500m) and Price again regards the Chris Waller-trained filly as the horse to beat.

“But it doesn’t matter, we’re there to compete and you never know.”

A Group One winner of the Champagne Stakes at two, Seabrook has not been extended beyond 1600 metres.

Her sire Hinchinbrook is best known for producing sprinter-milers but Price points to stoutness on her dam’s side as an indication Seabrook might have the stamina for a middle-distance.

“Not many Hinchinbrooks get tried over 2000 metres but she is out of a Don Eduardo mare and she is a pretty clean-winded horse,” Price said.

Brett Prebble was aboard Seabrook for her first-up midfield effort in the Surround Stakes and reunites with the three-year-old in Saturday’s Group One event.

She has an awkward gate in 11 but Price is hoping Prebble can slot Seabrook in behind the speed and give her every chance to finish the race off.

“I think there’s a good opportunity for there to be a bit of speed on, enough speed from that gate so that we can poke in somewhere,” Price said.

“I’m happy with the filly. Prebble rode her on Tuesday morning and said she worked super.

“She’s done the work, blinkers off, she seems to handle the ground OK so if she can’t fire over 2000 metres she’s just not good enough. She’s had the perfect prep.”

Price also has Oregon’s Day in the Group Two Emancipation Stakes but says the mare will not line up if the track is heavy after struggling in similar conditions when sixth in the Coolmore Classic.

“Michael Walker got off and said she felt like she was going to be in the finish but then the wheels were spinning on the heavy track,” Price said.

“Some do, some don’t, she just doesn’t handle the heavy.”