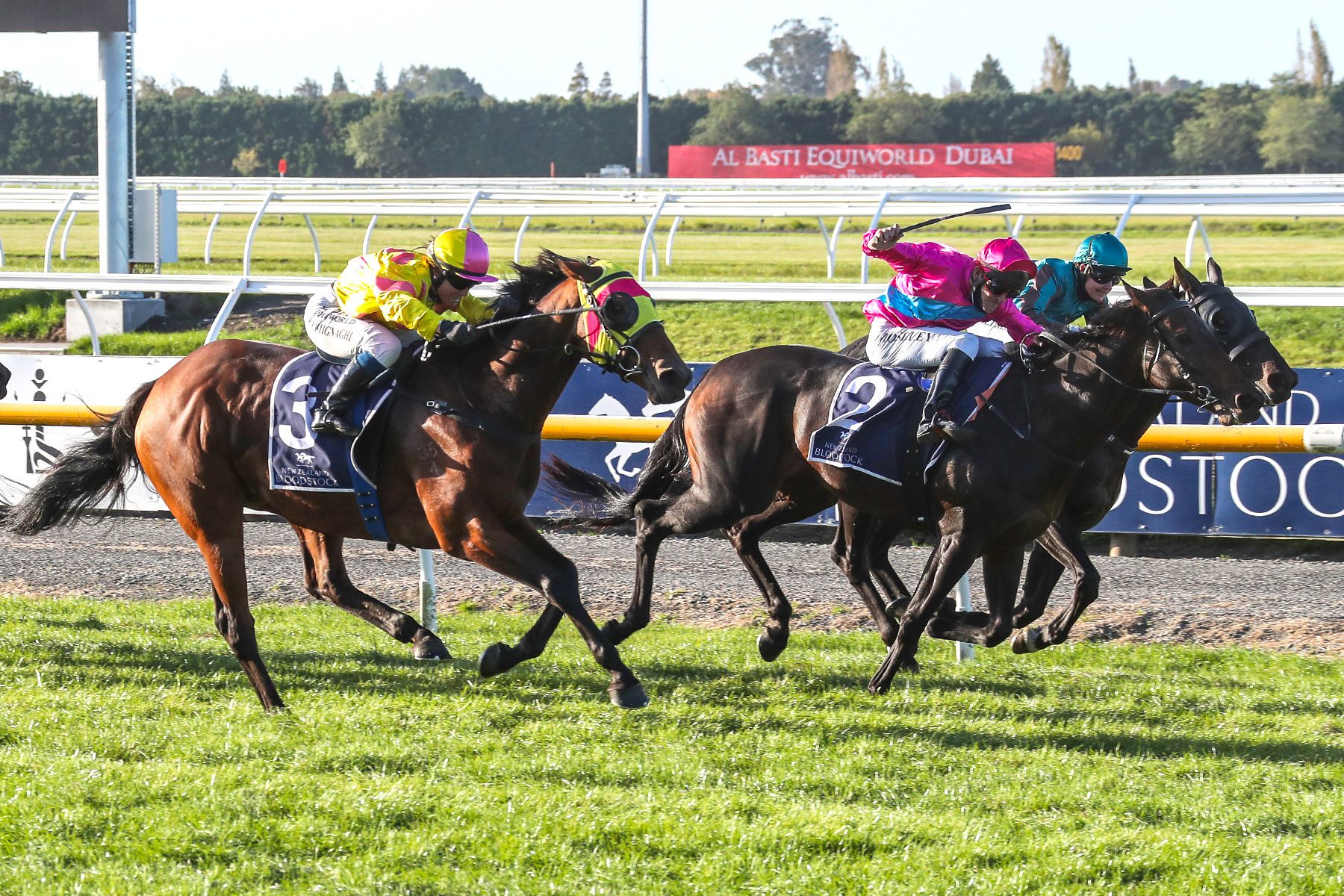 Feisty New Zealand five-year-old Irish Girl showed all her fighting qualities as she bravely held out the challenges of Beneficial and Seriously to win the Listed Avon City Ford Easter Cup (1600m) at Riccarton.

The Ruakaka-prepared daughter of El Roca was taken south by trainers Ken Rae and his daughter Krystal Williams-Tuhoro to tackle several of the black type features at Riccarton during their autumn carnival and she made it two from two on Saturday after defeating members of the fairer sex in the Group 3 South Island Breeders’ Stakes (1600m) at her previous start.

This time she tackled the boys as well, however it made no difference as she displayed her determined will to win to collect her seventh career victory.

Rider Terry Mosely made good use of a handy barrier draw (6) to bounce the mare into a prominent position from the start before taking up the trail behind pacemaker Seriously.

Seriously put three lengths on Irish Girl rounding the home bend and looked to have her and the rest of the field in trouble as he was still clear with 150m to run.

Mosely got to work on Irish Girl and she slowly but surely pulled the margin back to put her head in front on the post as Beneficial roared home from last on the corner to snatch second ahead of a brave Seriously who had to settle for third.

Rae, who was watching from his Ruakaka home, was left shaking his head at the tenaciousness of his charge.

“I spoke with Terry after the race and he said she was flat on the corner but just wouldn’t give up.

“We’ve been very lucky as everything has gone to plan. Her main mission was the Breeders’ Stakes and once we won that anything afterwards is icing on the cake.”

Rae has been toying with taking the mare to Australia later in the winter and the venture could still be on the cards following one last assignment at Riccarton.

“I said to Vince Roberts, who co-bred and part owns her, that we should think About going over to Queensland,” Rae said.

“When we made the decision to stay down at Riccarton, we planned to tackle the Easter Cup today and then the Canterbury Gold Cup (Group 3, 2000m) in a fortnight.

“We don’t know if she can get 2000m but at weight-for-age down at Riccarton she will get her best chance.

“Safely through that then she can have a short break and we could still put her on a plane to Queensland for late June and July, when the other kiwis are coming home.”

Irish Girl was bred by Roberts and co-owner Gary Hackett, with Roberts convincing Irish couple Louie and Pat Henaghan to take a share in the mare when they were last in New Zealand visiting their son.

“The Heneghans used to come over every couple of years to see their son and when they were last here before the COVID lockdowns I talked them into taking a share in Irish Girl,” Roberts said.

“They love their racing but haven’t been able to come and see her race.

“I do know they get up pretty early to listen to all her races so hopefully they are celebrating another win over breakfast back in Ireland.”

Out of the useful race mare Aimee’s Babe, Irish Girl is a granddaughter of stakes winner Aimee’s Idol and has now won seven of her 20 starts and over NZD$208,000 in prizemoney.