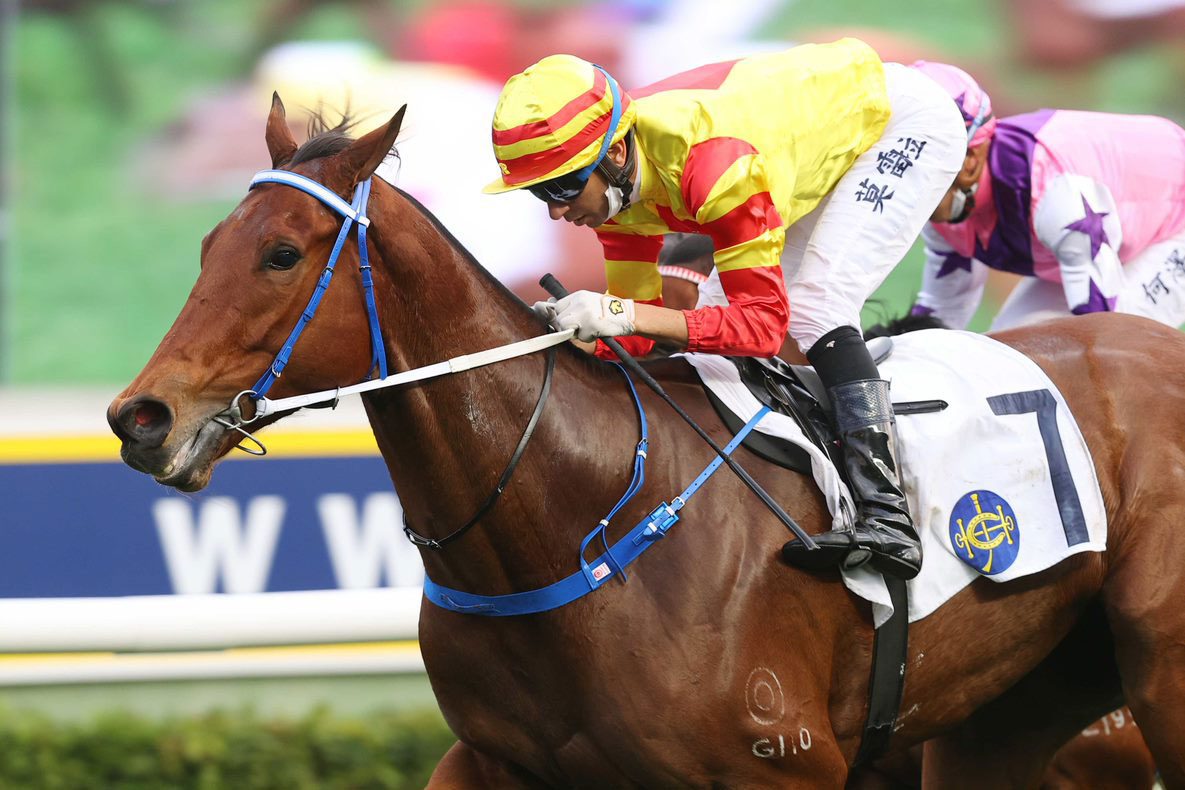 Galaxy Witness has emerged as an early contender for next season’s Four-Year-Old Classic Series after brilliant victory for Caspar Fownes and Joao Moreira as Leading Fortune upstaged a cluster of this month’s BMW Hong Kong Derby (2000m) hopefuls to continue the championship-leading seasons of Zac Purton and John Size at Sha Tin on Sunday (6 March).

Galaxy Witness remains unbeaten after three starts, managing the rise in class and distance with aplomb with a driving triumph in the Class 3 Hyacinth Handicap (1400m) after missing the start before sweeping home in 22.84s for the last 400m.

“He’s a nice horse, he’s slowly improving – he’s gone from 1000m to 1200m to 1400m and he’s still learning. So, he’s quite nice for next season, we’re going to have some fun with him,” Fownes said before confirming the 2023 Four-Year-Old Classic Series, which culminates in the BMW Hong Kong Derby, is a long-range aspiration.

“He’s run well and he’s done his job nicely and I hope that we can get another one (win) with him. He’s the type of horse who’s going to get further, so we’re going to treat him like a good horse – which he is – and keep progressing.”

On a day when Moreira, Purton and Blake Shinn shared riding honours with doubles, Flying Ace also preserved an unblemished record with a fourth consecutive win for David Hall and Matthew Poon, charging late to land the Class 3 Freesia Handicap (1200m), motoring over the last 400m in 22.83s.

“It certainly wasn’t a big margin, but he’s still not getting all the favours, is he?” Hall said after the son of Swiss Ace prevailed over Rock Ya Heart by a short head. “I know the horse can race a helluva lot closer. He’s having to make up ground and do it the hard way and he had more weight (126lb) today. He wasn’t as impressive at the finish because it was quite close, but to win four in a row in a preparation – for any horse in Hong Kong is great – he’s doing his job very well.

“He’s, mentally, not there yet – he still does plenty of things wrong. He’s a bit of a quirky horse with his mind. He’s got that potential and will get there eventually.”

Purton executed the upset of the day when Leading Fortune emerged from Beauty Live’s slipstream to down the Classic entrant by a neck in the Class 3 Jonquil Handicap (1600m), while Precise Express finished third with Copartner Elites in fourth placing.

Needing to win to bolster hopes of running in the HKD$24 million BMW Hong Kong Derby (2000m) on 20 March, Beauty Live led for Moreira and completed a leisurely first 800m in 49.33s, but could not repel Leading Fortune’s late acceleration.

A son of Siyouni, Leading Fortune’s previous five victories had materialised in Class 4 but the six-year-old handled the rise in class in style, ultimately cruising to the softest of wins for Purton, who leads Moreira 82-78.

Will Power validated Shinn’s pre-race claim that the Power gelding is Hong Kong’s premier dirt course performer with victory under 133 pounds in the Class 1 Cornflower Handicap (1650m, dirt), the six-year-old’s eighth win on the surface.

“He certainly loves the surface and the race was pretty much set up for him again today, they went really hard up in front, three abreast, and he just came into the race at the right time, but he still had to carry the weight – and they made him carry the weight today and he managed to do that,” trainer Douglas Whyte said.

Whyte indicated Will Power would now be spelled before returning in preparation for suitable targets at the end of next season.

Celebrating a double aboard Telecom Missile, narrow victor in the Class 5 Tulip Handicap (1200m) for Fownes, Shinn continued his strong Sha Tin form. The Australian has ridden a winner at four consecutive Sha Tin meetings to boost his tally for the 2021/22 campaign to 19, edging closer to his previous-best haul of 24 wins in a season.

Chris So lauded Moreira’s ride after Enjoying posted his first Hong Kong success at his 20th start with success in the Class 2 Dendrobium Handicap (1800m).

“He’s one-paced and Joao rode him perfectly,” a jubilant So said. “This horse has no turn of foot, so Joao decided to lead and he was able to get the win. It is very satisfying.”

“I originally entered him for the 1600m on the turf, but he wasn’t going to get a start, so I transferred him to the dirt, 1650 metres – but I didn’t know how he would go on the dirt,” a delighted Ting said. “Luke rode a great race, he set a good pace and he won the race.”

“He’s a nice horse. He did a lot of things wrong today and the jockey said he was very green,” Ting said. “He was looking around everywhere, so I think he will improve off this run.”

A three-year-old son of Turn Me Loose, Smiling Collector won a trial at Te Rapa last year before export to Hong Kong.

Manfred Man’s decision to apply blinkers to Flying Season paid off when the three-year-old swept to victory in the Class 4 Kalanchoe Handicap (1000m) under Jerry Chau.

“At his first start, he reared up in the gates so then he needed to undergo a stall test and last Monday I decided to put the blinkers on and that made the difference,” Man said after registering the stable’s 20th win for the term.

Purton maintained impressive momentum with Free Foal, winner of the Class 4 Oncidium Handicap (1600m) to provide trainer Frankie Lor with his 50th win of the season. Lor trails Size by one win in the trainers’ championship.