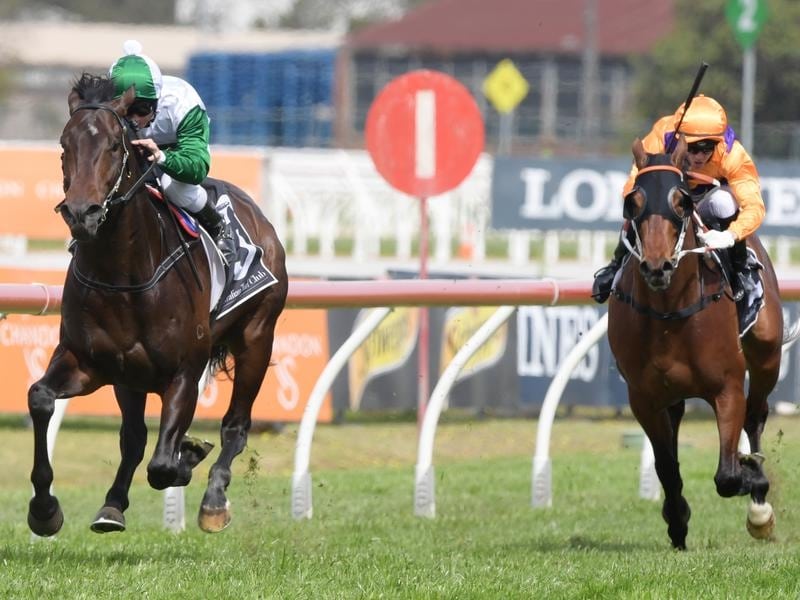 He has a long way to go but Thinkin’ Big’s Gloaming Stakes win has prompted Gai Waterhouse to talk him up for the Melbourne Cup.

No southern hemisphere-bred three-year-old has run in the Cup this century and the last one to be placed was the Waterhouse-trained Nothin’ Leica Dane in 1995.

Now training in partnership with Adrian Bott, Waterhouse believes Thinkin’ Big is the right sort of emerging stayer to make a bid for Australia’s most famous race after he led most of the way to win Saturday’s Gloaming (1800m).

“He is nominated for the Melbourne Cup,” Waterhouse said.

“He reminds me so much of Nothin’ Leica Dane and he is also in his family.”

The colt’s granddam Nothin’ Leica Ripa is by Nothin’ Leica Dane who also won the Victoria Derby, another target for Thinkin’ BIg who will next head to the Spring Champion Stakes (2000m) at Randwick in two weeks.

With the Gloaming field reduced to five, Tim Clark eased Thinkin’ Big ($5) to the front while James McDonald had the $3 favourite Tarka on the rail.

Thinkin’ Big had plenty in hand as he hit the line 2-1/2 lengths ahead of Tarka who hit a flat spot near the turn.

“He is a really nice, imposing young colt,” Clark said.

“He’s got presence about him and has a very bright future.

“He’s got a great attitude, a good cruising speed and is a really promising young stayer.

“If something had been good enough to challenge him, he still had a fair bit there.”

Tarka’s trainer David Payne said he would put blinkers on the colt for the Spring Champion.

“He was too casual and needs blinkers now,” he said.

“He hit a flat spot but he needs to focus.”