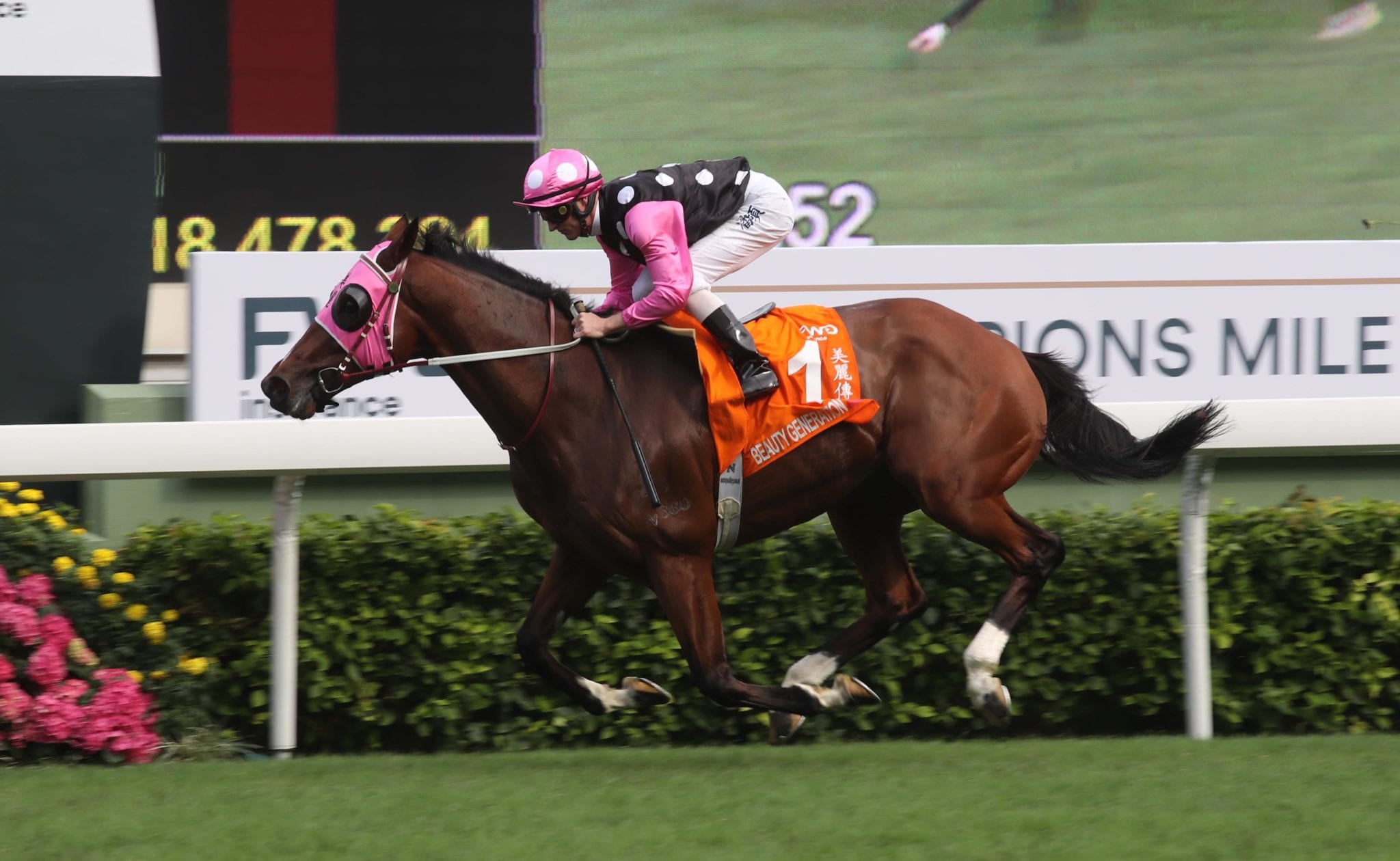 The impact on the world of the COVID-19 pandemic has meant that no overseas horses will travel to Hong Kong for this year’s FWD Champions Day. Despite this, a total of 34 talented horses from the strong Hong Kong ranks have been selected to compete in the three races, including 10 individual Group 1 winners and a further 12 horses that have won a Group 2 race and/or finished second or third at Group 1 level.

Mr. Andrew Harding, Executive Director, Racing, at the Hong Kong Jockey Club, said: “People in Hong Kong and around the world are working through a difficult time and in such circumstances sport must be positioned in a place of appropriate relevance. At the Hong Kong Jockey Club we recognise this and also understand that sport can bring enjoyment and uplift during tough challenges. That being so, with stringent access control, social distancing and hygiene measures in place, FWD Champions Day will provide exciting sporting action with three Group 1 races of worthy quality despite the absence of overseas runners.

“A rejuvenated Beauty Generation will aim to uplift his many fans with a third FWD Champions Mile victory; Golden Sixty and Exultant will battle for supremacy in a fascinating clash of the generations for the FWD QEII Cup; and our world class sprinters will put on a show of exhilarating speed in the Chairman’s Sprint Prize. The fact that Hong Kong can draw on the best of our 1,300 horses to stage three Group 1 races of such quality is testament to the talent we have here and we are happy to be in a position to invite racing fans around the world to enjoy an uplifting day of sport.”

Golden Sixty would mount an awesome challenge to Beauty Generation’s status as Hong Kong’s Horse of the Year should he become only the fifth galloper to win both the Hong Kong Derby and the QEII Cup within the same season. The outstanding four-year-old is unbeaten in seven races this term and his incredible closing run to victory in the Derby under Vincent Ho saw him become only the second horse ever to complete a clean-sweep of the three-race Four-Year-Old Classic Series.

Trainer Francis Lui’s stable star is one of 11 selected for the 2000m feature and it will be his toughest task to date. The Australian-bred will face Hong Kong’s Champion Stayer and Champion Middle-Distance horse Exultant, a three-time Group 1 winner and an arguably unlucky runner-up to Japan’s Win Bright in last year’s edition. Exultant has been in fine form again this term but he came undone in the Group 1 Hong Kong Gold Cup (2000m) last time when a desperately closing second to his Tony Cruz-trained stablemate Time Warp.

Time Warp’s last start win represented a return to form for the enigmatic front-runner – winner of the 2017 Group 1 Hong Kong Cup (2000m) – and gave the former track record holder a third win at the highest level.

Also among the selected runners is Time Warp’s year-younger full-brother, the Frankie Lor-trained Glorious Forever, winner of the 2018 Group 1 Hong Kong Cup, while the 2019 Hong Kong Derby hero Furore – since transferred to Cruz from the Lor stable – is engaged as well.

The field is also set to feature high-class dirt track specialist Elusive State – a smart performer on turf too – as well as that gelding’s Tony Millard-trained stablemate Glorious Dragon, an emerging talent in the division. Trainer Danny Shum will seek success with this year’s Derby runner-up Playa Del Puente.

Beauty Generation was imperious in winning the past two editions of the FWD Champions Mile. The equal highest-rated (127) horse in Hong Kong history and two-time Horse of the Year surpassed Viva Pataca’s old prize money record when winning the race in 2019 and his last-start success in the Group 2 Chairman’s Trophy (1600m) saw him break the HK$100 million prize money barrier.

John Moore’s stable star had his incredible 18-month unbeaten streak halted in October at 10 wins. The great miler suffered defeat in four races before he regained the thread in the Group 1 Queen’s Silver Jubilee Cup (1400m) in February and followed up in the Chairman’s Trophy. Last year’s world’s top-rated miler is once again the horse to beat as he bids to become the first to win the Champions Mile three times.

Waikuku is an exciting rising talent and has finished ahead of Beauty Generation four times this season including when winning – by a neck from his rival – the Group 1 Stewards’ Cup (1600m) in January. John Size’s charge was sent off favourite to beat the champ again at his subsequent start, in the Chairman’s Trophy (5 April), but failed to fire and placed sixth on the rain-softened ground.

Ka Ying Star has proven to be a high-class runner in Group 1 contests this term. The bay was third in the Stewards’ Cup and placed a half-length second to Beauty Generation in both the Queen’s Silver Jubilee Cup and Chairman’s Trophy.

Also among the 12 selected runners is the talented four-year-old ex-British galloper More Than This, trained by Lui to finish third behind stablemate Golden Sixty in the Derby. Southern Legend is a two-time winner of the SIN Group 1 Kranji Mile and was third in the 2018 Champions Mile for trainer Caspar Fownes.

Simply Brilliant was third in last year’s Champions Mile while the four-year-old Decrypt was third to Phoenix Of Spain in the 2019 Group 1 Irish 2,000 Guineas (1600m).

With last year’s winner Beat The Clock sidelined since February, the opportunity arises for the emergence of a challenger to his Champion Sprinter crown. The pack leaders appear to be Aethero, Hot King Prawn and Voyage Warrior but it would take a massive victory to take the outright title from the horse that won this season’s Group 1 Hong Kong Sprint (1200m) and Group 1 Centenary Sprint Cup (1200m).

But the Moore stable believes it has the next superstar on the block. Aethero is still a three-year-old and is rated 119 (local rating), just two notches below what the great Silent Witness was rated at the end of his three-year-old campaign. The chestnut enjoyed a hefty weight-for-age allowance to win the Group 2 Jockey Club Sprint (1200m) in November and was found to be sick after a game third in the Group 1 Hong Kong Sprint a few weeks later. But he missed the break and then over-raced in a disappointing return when eighth in the Group 2 Sprint Cup (1200m) on 5 April.

Voyage Warrior won that race from the front and went a long way to confirming trainer Ricky Yiu’s high regard for him. The four-year-old is maturing and learning with each run and now has a record of five wins from 10 starts.

The Size-trained Hot King Prawn had a profile not dissimilar to Aethero when he was turned over as favourite for the 2018 Group 1 Hong Kong Sprint and was then sidelined following colic surgery. He has returned better than ever this term and has not been out of the placings in six starts, including three at Group 1 level. He kept on for second in the Sprint Cup and retains the profile of a Group 1 winner in waiting.

Also among the 11 selected runners is Thanks Forever, a high-class Group 1-placed sprinter on the up, while Big Time Baby was all set to line up in Dubai for the Group 1 Dubai Golden Shaheen (1200m) on the dirt track until that meeting was called off and is a talented runner on turf too; Mr Stunning and D B Pin are two veteran Group 1 winners always worthy of respect on the world stage.