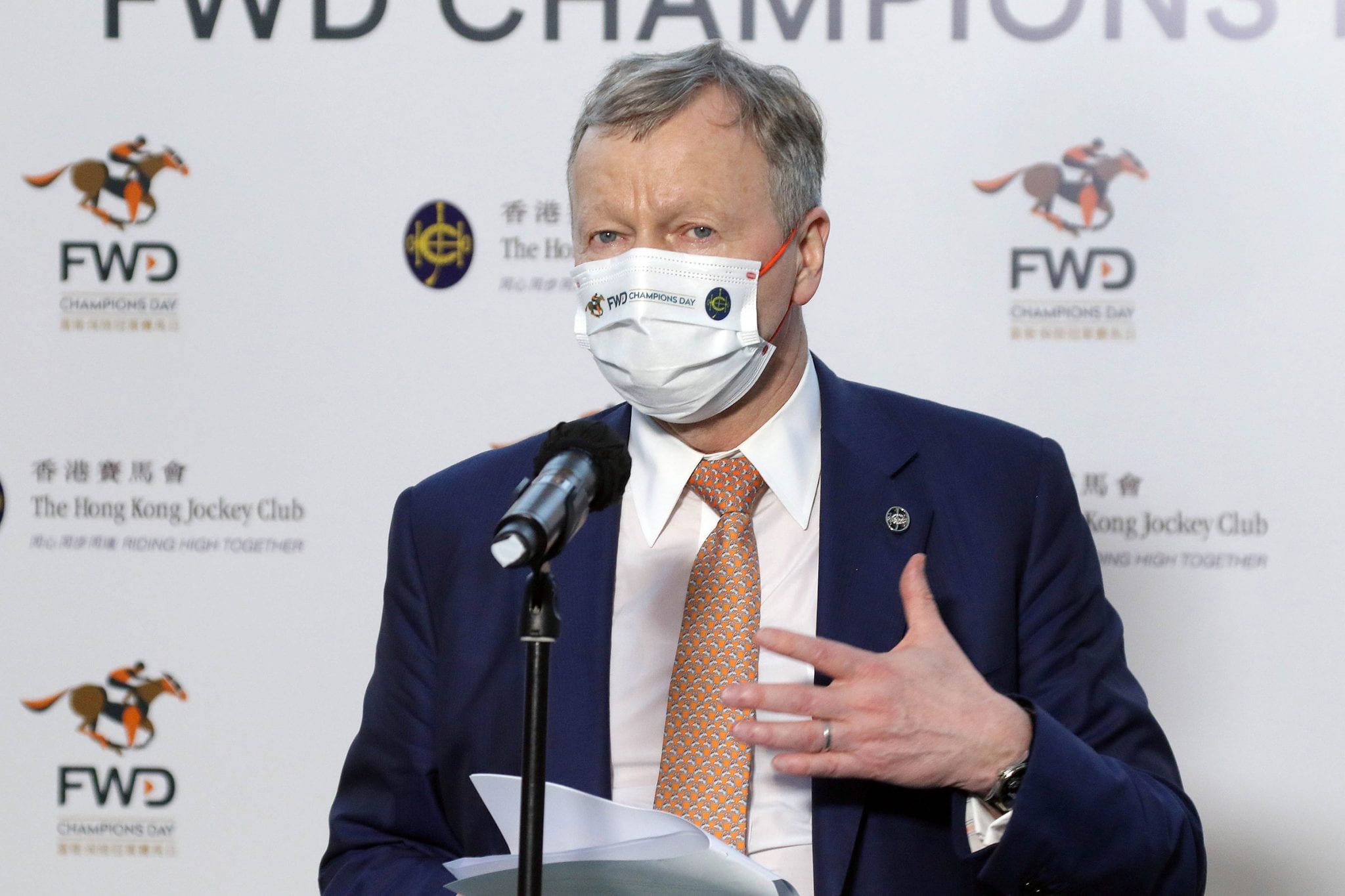 A landmark FWD Champions Day, crowned by Vincent Ho’s Group 1 double, record turnover and the emergence of a potential future champion are evidence of Hong Kong racing’s resilience and attractiveness, according to Club CEO Winfried Engelbrecht-Bresges.

Pointing to Ho’s effort to extend Golden Sixty’s winning streak to 14 with victory in the Champions Mile before partnering Japan’s Loves Only You to success in the QEII Cup, Mr Engelbrecht-Bresges predicted Courier Wonder could eventually follow Wellington – winner of the Chairman’s Sprint Prize – to stardom.

“It’s great to have people coming back to the racecourse for a meeting of this quality,” Mr Engelbrecht-Bresges said, acknowledging the 5719 Sha Tin attendees who observed stringent biosecurity controls.

“Golden Sixty kept his unbeaten record and, if you look at the performances of Loves Only You and Wellington, it was an amazing day.

“I would like to thank everyone who has kept the Racing Bubble going and it was especially satisfying that our Japanese friends trusted our systems enough to come here and, with the support of the HKSAR Government, we have been able to stage an incredible FWD Champions Day.

“We saw some amazing performances from the Japanese horses, who have again shown at distances of 2000m and above they are superior. For Loves Only You to come here from Dubai and win was terrific.”

“With the support of the Government – and the way they trust us – and the support of our sponsor, we were able to have our fans back at the track,” Mr Engelbrecht-Bresges said before turning his attention to three-year-old Courier Wonder, who maintained his unbeaten run in the Class 2 FWD Insurance My Legend Handicap (1200m) to earn a HK$1 million High Achievement Bonus.

The bonus is available to horses with a minimum rating of 80 who win a Class 2 race before turning five.

“The horse in the last race can eventually become one of the top horses in Hong Kong and, overall, I think the quality of the meeting meant it deserves the status of Champions Day and this is a great achievement for us.”

Executive Director, Racing, Mr Andrew Harding described Ho’s rise to international fame as “a very proud day in the history of the Racing Development Board.”

“The Club makes a very significant commitment and investment in local talent and development because we are absolutely committed to realising the potential that evidently does exist in Hong Kong,” Mr Harding said.

“It’s a significant investment in Vincent’s case. It meant a significant period of time overseas with Lance O’Sullivan. It goes beyond that. Once his apprenticeship finished, we worked with him to get exposure overseas and people like Ryan Moore saw his potential also and wanted to assist us.

“It also requires the support of trainers and connections. It’s their support that has allowed Vincent to show just how good he is.”