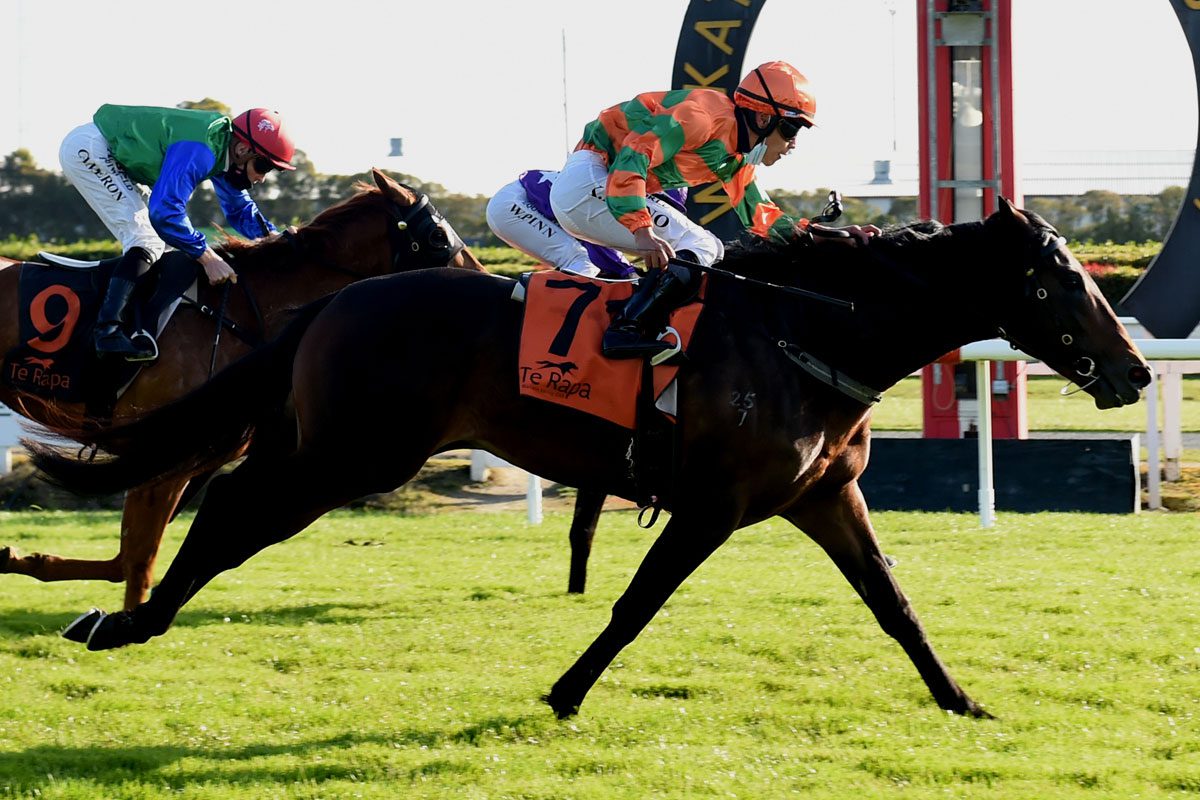 Trainer Murray Baker got to celebrate a special personal milestone with a victory at Te Rapa on Saturday when lightly raced four-year-old Frontman made a winning start to an ambitious spring campaign.

Baker and his wife Marianne are celebrating their 50th wedding anniversary, with Frontman putting a cherry on top with the victory.

Good enough to finish third in the Group 1 New Zealand Derby (2400m) last season, at just his fourth start, the Makfi gelding went on to perform with credit in two starts in Australia, including finishing close-up in seventh in the Group 1 ATC Derby (2400m) at Randwick in April.

Put aside for a break after that run, Frontman was having his first start for the spring on Saturday for Baker and training partner Andrew Forsman and looks to be in for a profitable few months as he loomed up halfway down the Te Rapa straight before holding out the challenge of Swords Drawn and stablemate Marroni to take out the open 1400m contest.

“He is a very promising horse,” Baker said.

“He was good enough to finish third in the Derby after just three races and he also went well in Australia without winning.

“He is owned by Australian interests, so we went over for them and he certainly didn’t let anyone down.

“He came home and had a really good break and has been working along nicely leading up to today.

“We were a little worried about the track being too wet for him, but you have to kick them off somewhere and he got out into the better ground out wide in the straight, so that helped.

“It was close at the end, but he wasn’t knocked around and should take plenty of benefit from the run.”

Baker outlined some ambitious plans for his charge over the next two months that include a tilt at the last two legs of the Hastings triple crown, the Group 1 Windsor Park Stakes (1600m) and the Group 1 Livamol Classic (2040m)

“We’ve got him nominated for all three of the Hastings Group One’s, but he will miss the Tarzino Trophy (1400m) next week,” Baker said.

“He also has a nomination for the Coupland’s Bakeries Mile (Group 2, 1600m) in November, but that is dependent on what happens at Hastings.

“He is out of an outstanding mare, a blue hen mare who has already produced five black type winners and I think this guy can definitely be the sixth.”

Frontman is out of the Zabeel mare Imposingly and is the younger sibling of the stable’s two-time New Zealand Horse of the Year and triple Group One winner Bonneval, and Group Three winner Imposing Lass, who was prepared by Baker’s son Bjorn.

The prolific mare is also the mother of the Baker-Forsman trained Group Two winner Lord Arthur and Group Three winners Full Of Spirit and Lady Cumquat.

Baker was also pleased with the performance of third placegetter Marroni, who was having his first start since being brought down at the venue back in May. He is also a candidate for the Group 2 Coupland’s Bakeries Mile (1600m) at Riccarton on November 10.

While Baker was delighted with his Te Rapa victory, he admitted there weren’t any big plans to mark his wedding anniversary, preferring to spend a quiet evening at home with Marianne and a good bottle of wine to toast the victory.