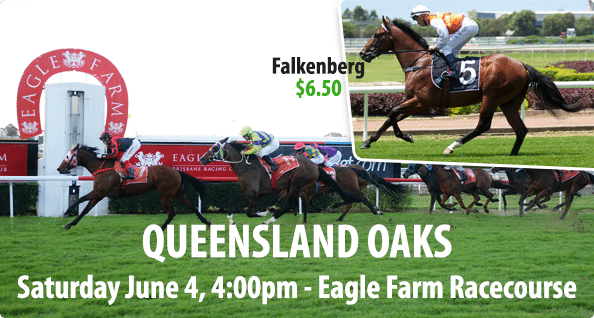 IT’S Group 1 Queensland Oaks day this Saturday as the racing action returns to Eagle Farm. The $500,000 Oaks features a top-quality field of 22 runners and the new Eagle Farm surface should add to the spectacle.

Punters are having a tough time deciding which Oaks contender to make the favourite with five runners currently paying less than $10. Falkenberg has attracted the most money throughout the week and will likely start as favourite, but there are a host of chances paying great prices with our bookmakers.

Sign up for Sportsbet’s Oaks Day Special and get cash back up to $50 if your horses runs second or third in the first four races at Eagle Farm this Saturday.

The John O’Shea-trained Archives couldn’t have been more impressive last start when it fought doggedly with Jericho in the straight. The two-year-old by Helmut got a gap along the inside of runners and looked to get headed halfway down the straight, but it fought back admirably. It has drawn awkwardly in barrier eight, but punters have climbed into the $2.60 available.

Jericho is the obvious danger to the favourite having finished second behind it last start. The Peter and Paul Snowden-trained colt will have to contend with barrier 15, but it dropped back last start before producing a good sprint. Similar tactics will be needed here and it looks a chance on the second line of betting at $3.90.

Redouble didn’t have much peace in front at Doomben last start and it beat a subsequent winner on debut. The son of Redoute’s Choice will likely head forward from barrier 12 and set a moderate tempo in front. It likes to roll along at its own steam and it could finish in the top three again. $7.50 hope.

Furnaces is an inconsistent type, but it has plenty of speed and this distance will suit. The Godolphin colt has drawn in barrier 17 which makes it tough, but it usually flies the gates and goes forward. If James McDonald can get to the front it has enough ability to hold them off late. Currently an each-way chance at $5.50.

Felines is a professional winner of seven from 19 starts. The Kris Lees-trained mare is a six-time winner at this short-course distance and it just found the opposition a touch too classy last start. It ran fifth in the Challenge Stakes behind English and that form should stack up nicely here. It put three lengths on the likes of Craftiness prior and Bowman takes the ride. Top chance at $5.

Shamalia has had a year off the track, but there are positive signs in the marketplace. The James Cummings-trained mare is paying only $5.50 so there is clearly some stable support. It has won two from its three fresh up starts its only start at this distance so consider for the win, but we would want to see a better price than what’s currently being offered.

Imported gelding Maurus loomed up to win the Doomben Cup last start, but was found wanting over the concluding stages. The David Vandyke-trained runner was an easy 3.5-length winner at Doomben prior and the Eagle Farm track should play into its hands. We question its turn-of-foot to be able to win consistently, but this field isn’t overly exciting. $3.40 chance with bookmakers.

Current favourite is New Zealand runner Volkstok’n’barrell which battled away for fourth in the Doomben Cup. The four-year-old is already having its 22nd start so it has plenty of experience under its belt and it looks suited by the weights at this level. It can handle all track conditions which will suit on the unknown Eagle Farm track, so consider in this at $2.80.

Provocative must be included if it doesn’t get a start in the Oaks. The Tony Pike-trained runner faces an older field which makes it much harder to win, but is down in the weights at 54kg. It has plenty of upside and it looms as a winning chance at $6 if it runs.

Takedown put up a big run to finish second behind Counterattack in the Fred Best Classic last start. The Gary Moore-trained gelding showed its class in that effort and it faces a much easier field here. We’re not surprised to see it open as the $3.60 favourite and it might be able to get a soft lead in a race that looks void of any true pace.

Kimberley Star gets the 4kg weight drop on Takedown and it should be considered after running third behind Serene Majesty in the Inglis Guineas. The Gai Waterhouse-trained filly has form behind the likes of Speak Fondly and Redzel, which looks good at this level and having McDonald in the saddle will only help. Expect it to drop back and flash home late. $4.20 with bookmakers.

The bubble burst for Sold For Song backers last start after the filly didn’t have much luck in running. The Kevin Kemp-trained filly had looked impressive when flashing home to run second behind Takedown in the Gold Coast Guineas and it had no room in the straight at Doomben last start. It’s a runner that will require the pace to be on, but punters are confident at $4.80.

Miss Cover Girl could be the forgotten runner at $11. The Kelly Schweida-trained mare made late ground to finish seventh in the Bright Shadow last start and its start prior was a second placing behind Eloping. It has trialed very well at Eagle Farm and although it hasn’t drawn favourably, it looms as a nice value chance.

Alucinari comes into contention having won the Denises Joy at Scone last start. The three-year-old filly is also twice a winner second up and the wide draw won’t be any concern. It is an adaptable type which can race on the speed or drop back and we expect it to settle midfield before launching down the lengthy straight. Chance at $8 in an extremely even field.

Tina Melina is a capable mare which was doing its best work late last start. The Jet Spur mare is a five-time winner at this distance and the inside draw will ensure it gets all the luck in the running. It drops down in weight from last time out and the $9 is another solid each way price.

Snippets Land landed its biggest win to date last start in the BRC Sprint at Doomben. The five-year-old was not fancied in the betting at $14, but it flew home late to beat Religify on the line. This race looks a touch harder, but its opening quote of $7.50 has already dropped to $6.50. Looks a chance again.

Kaepernick has been well backed for both this race and the upcoming Stradbroke Handicap. The Hawkes-trained gelding opened at $3.80 for this and has already dropped down to $3.50 on the back of a big win at Scone last start. It sat near the back of the field before unleashing a big sprint and more wins look in store this winter.

Perfect Fit has had an impressive season in New Zealand which has included four wins from its last five starts. It won the Group 1 Breeders’ Stakes last start and dropping down to 53kg makes it a winning chance. It’s much better suited to racing over more ground, but it opened at $12 and has already dropped down to $8.

Falkenberg was desperately unlucky in The Roses last start, but it look a top chance over the longer distance. The Peter and Paul Snowden-trained filly missed the jump and never found a clear passage, but from barrier three it should be able to get a good trip in transit. The run would have done it no harm and it looks a top chance at $6.50.

Kebede was a worthy winner last start and based on its breeding, it should relish the rise up in distance. The daughter of Redoute’s Choice has been running well all campaign, but has continued to fly under the radar. The bookmakers opened it at $10 earlier in the week and that price hasn’t budged since. It looks certain to see out the distance so consider it for the win.

Provocative is still on the ballot, but its opening price of $12 has dropped down to $8.50. The Tony Pike-trained filly won well down in grade last start, but it has been set for the Oaks and it could add some much needed speed in the race. Drawing barrier 20 hasn’t helped its chances, but if it runs it will prove its worth.

Hi World has been one of the best-backed runners of the day. The Lee and Anthony Freedman-trained horse opened at $15 and is now currently at $9 on the back of strong support. It finished sixth fresh up last start and punters are obviously expecting quick improvement out of the four-year-old. Its chances increase with rain, so conditions could suit if the showers arrive.

Religify wouldn’t have lost any admirers when it finished second last time out at Doomben. The Chris Waller-trained gelding is a model of consistency and although it rises to an unsuitable weight of 57.5kg, having Hugh Bowman in the saddle helps. It rises up to an unfamiliar distance which is the concern and the main reason why it’s paying $9.

Federal is the loose favourite at $6 after opening at $6.50. The John O’Shea-trained gelding finished fourth behind Clearly Innocent last start and its best effort came when fourth behind subsequent group 1 winner Music Magnate at Randwick. It is well weighted at 55.5kg and we expect its price to drop further.