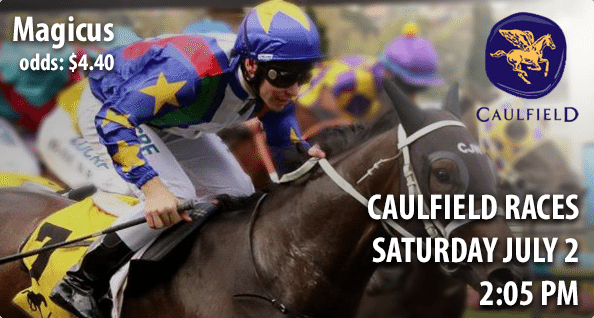 THE final group 1 races of the season has been run, but that doesn’t mean the good racing has finished. Caulfield hosts a cracking nine-race card this Saturday and it’s looking like a punters paradise.

There’s a good mix of heavily-supported favourites and wide-open fields which will suit every punter and Sportsbet.com.au is making it easier. It is offering a best odds offer on all #1 runners at Caulfield and also a cash back special on selected races.

The weather should play its part on the day, but expect a rain-affected track at Caulfield which kicks off with the Catanach’s Jewellers 2YO Handicap where we could be seeing ten happy ladies cheering loudly.

Mick Kent lines up Tenappy Ladies which looked the winner on debut at Moonee Valley before being nabbed late. The two-year-old colt is owned by a group of 10 ladies and they will ensure that their runners gets plenty of support on track. It has already attracted support in the market, opening at $2.50 and dropping to $2.40. It looks a strong winning chance.

Gimlet is a two-year-old filly which hasn’t finished out of the money in four starts. The Darren Weir-trained daughter of Dream Ahead ran second at Sandown last start and that form should be good enough for this level. Drawn awkwardly, but looks a chance at $4.

Yu Long Sheng Hui is on the third line of betting after winning on debut. The Mick Price-trained colt started as the favourite at Wodonga and it didn’t disappoint, winning by six lengths. It is destined to compete a higher levels and the $6 looks a solid each way price.

Self Sense is a seven-time winner which is overdue for another. The David Brideoake-trained gelding has finished a close second in two runs this campaign and any moisture on the track will improve its chances. It is well-weighted at 55kg and the $4.40 being offered is a fair price.

Longeron is the current $2.80 favourite following a last start win at Moonee Valley. The Hawkes-trained gelding rarely runs a bad race at Caulfield and it’s a three-time winner at this distance. The increase in distance helped last start and dropping back 40 metres won’t be an issue. Looks hard to hold out.

Alcohol turned its form around with a last start second behind Longeron. Trainer Richard Jolly stepped it up over a similar distance last start and that was the right decision. It stays at the same weight for this and jockey Craig Williams remains in the saddle. It opened at $4.40, came into $4.20, but has since drifted out to its opening price.

Scherzoso is an imported gelding which was a winner in this grade three starts back before flashing home late last start. The in-form Tony McEvoy trains the four-year-old which is having its first start at Caulfield and punters are confident that it can produce the goods at $4 for the win.

Royal Rapture has won 10 races from 39 starts which includes its last start at Flemington. The six-year-old is a six-time winner on a slow track and it should get ideal conditions on race day. Drawing barrier six favourable and most runners will be trying to get away from the rail. Solid win chance at $5.50.

Pin Your Hopes is the current $3.50 favourite which gets a valuable 3kg claim from Ben Thompson. The six-year-old has won two of its last three races, but is stepping up from rating 78 to rating 90. That won’t make it easy here and we think the price being offered is too short.

Since arriving in the Darren Weir stables, Stormcraft has won both starts in Victoria and it has come in for support with bookmakers. The three-year-old opened at $6 and has shortened to $5.50. Stepping up over this distance holds no fears and only the inside draw is a worry.

Divine Mr Artie is coming off back-to-back placings and the 3kg claim will bring it right into contention. The three-year-old hasn’t had everything go its way of late, but it looks well-suited at this level and the wet track won’t be an issue. $4.80 available which will likely shorten.

Jerilderie Letter opened at $21 and has already come into $11. The Tasmanian gelding has won six from eight starts with two placings and it defeated the talented Howard Be Thy Name in the Tasmania Derby just two starts back. That’s very strong form and although it is well-weighted, it should be respected and the bookmakers will take a big hit if it wins.

Camdus looked good winning at midweek level, but it found racing on Saturday too tough last campaign. The Darren Weir-trained gelding has any amount of ability as it has shown winning three from six, and after a lengthy spell, it could show up in a fresh state. $7 is being offered which is a good price so consider on an each way basis.

Magicus has drawn barrier 17 which will make it tough over this distance, but it draw wide when winning at Moonee Valley last time out. The Chris Waller-trained four-year-old has won three from four with one second placing and had it drawn closer it would be a $2 favourite. It’s currently at $4.40 and will only need luck from the draw with Craig Williams in the saddle.

Coram has won only three from 22 starts, but it has the ability and bookmakers are keeping it safe at $7. The John Sadler-trained gelding finished off well for seventh at Flemington last start, suggesting the drop back in distance won’t suit, but include in the mix.

Ulmann is fresh up after a string of disappointing performances. Trainer Darren Weir will likely have it in good order and considering the current price of $5, punters should be taking notice. The four-year-old didn’t win in all four starts last campaign so take on trust and market movement alone.

Duke Of Brunswick is one of the most consistent runners going around. The Mick Price-trained gelding has won five from 19 starts with a further 10 placings. It hasn’t paid more than $4.60 in its last five starts which can be frustrating for punters. The four-year-old is currently the $3 favourite again, but it looks a strong hope against this field.

The New Boy is looking to rebound after a disappointing effort as the favourite last start. The Danny O’Brien-trained gelding faces an easier field here which it will appreciate and its form prior was excellent. The seven-year-old was a winner on this track in April and it is worth a gamble at $11.

Anatola has been one of the best-backed runners on the card. The Mick Price-trained filly won its first two career starts before running third at Moonee Valley last start. It ran as the $1.85 favourite last start, but lost no admirers as it fought hard to the line. The well-bred daughter of More Than Ready opened at $4.20 for this and is now at $3.80. Expect a good effort.

Lady Esprit looked the winner at Flemington last start before getting swamped on the line. The Ciaron Maher-trained filly looked good when winning by 2.75 lengths at Sandown three starts back and it drops to a winnable weight of only 54.5kg. Looks a chance at $4.40 after opening at $5.

Miss Gidget races best when fresh and the claim will help its cause. Cindy Alderson lines up the Gonski filly which hasn’t yet raced on a rain-affected track. There is plenty of unknown about it, but bookmakers have it on the third line of betting at $7.50.

She’s Got Speed ran on nicely behind Whoop Whoop at Flemington last start and it will appreciate another try at the distance. The three-year-old doesn’t have the best win rate, but it’s an improving staying type and it should feature in the finish at $6.50.

On Wings has only midweek form to recommend, but it won well at Geelong last start and it has the Darren Weir factor. The three-year-old won its only start at this distance and despite drawing barrier 16, it could figure in the finish at $8.

Hursley will have to carry 60kg after finishing third in a handicap at Flemington last start, but it has the class to overcome that. The Chris Waller-trained gelding was good enough to run in the Group 1 Rosehill Guineas behind Tarzino and although it didn’t figure in the finish, that experience will come into play. $6 chance with bookmakers.

A Lotta Love is getting it from the punters. The Sam Pritchard-Gordon-trained mare opened at $4.40 and is now at $4 after running second in a similar race last start. The four-year-old has yet to win in two starts at Caulfield, but it has winning form at this distance and on rain-affected tracks. Win hope in an even field.

Shades Of Bella was an impressive last start winner at Caulfield and there is no reason why it can’t repeat the dose. It has won five from 15 with five placings and four have come at this distance. It is fit having had three runs this campaign and it could start favourite. $4.60 available currently.

Hotel Sierra is a chance at $12. The Darren Weir-trained sprinter ran second last start and although it has been a long time between drinks in the win ranks, it could run into the money. Consider at the light weight of only 52.5kg.