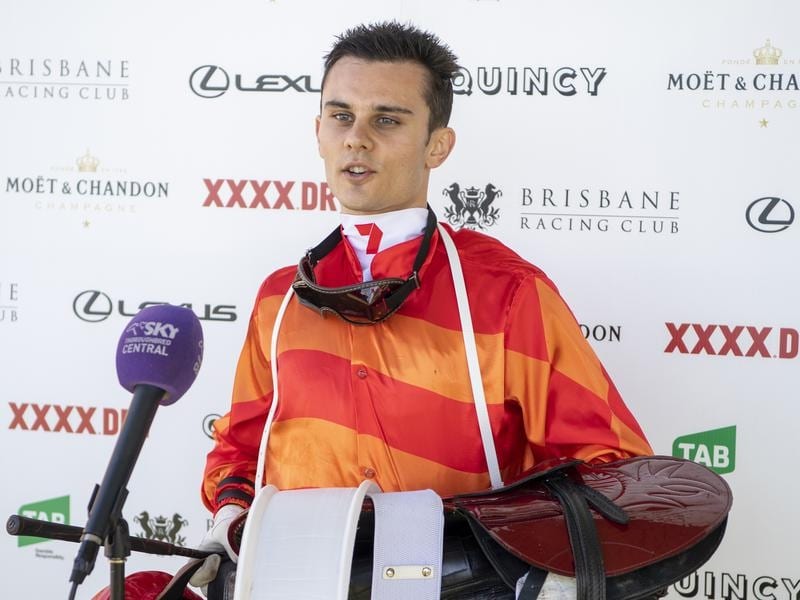 Desleigh Forster is mulling over a rider replacement for talented filly Eelloh at Doomben following an injury to regular jockey Taylor Marshall.

Marshall suffered three broken ribs when his mount Topline played up in the barriers at Ipswich on Wednesday.

The horse became cast before being withdrawn on veterinary advice.

Marshall will have his injuries reassessed in two weeks when he will gain a better idea of how long he will spend on the sidelines.

“It’s a real shame for Taylor because he’s been on a roll lately, but he’s still young so hopefully he’ll heal quickly,” Forster said.

Jim Byrne and Mark Du Plessis, who have ridden extensively for Forster in the past, are among the frontrunners to gain the ride on Eelloh in the TAB Long May We Play Handicap (1600m) on Saturday.

The filly impressed Forster with her strong surge at the finish of 1350 metres when she scored at Doomben on August 8.

“I don’t think the mile is going to be an issue for her the way she switches off and relaxes,” she said.

“She’s always shown she’s going to handle a trip and she’s got a good attitude.”

The daughter of Better Than Ready settled among the backmarkers at her past two starts but Forster believes she can position closer after drawing barrier three.

“She’s drawn one from the outside at her past two runs and we had to ride her back to get in, but from gate three on Saturday she should just lob into a lovely spot and do no work,” she said.

Eelloh was bought for $20,000 as a yearling and has already repaid her syndicate of owners five-fold with the promise of more to come given she is a Magic Millions graduate.

Following Saturday’s assignment, Forster plans to give the filly a break before targeting the Magic Millions Guineas (1400m) at the Gold Coast in January.

The Guineas is also on the agenda for stablemate Apache Chase, who is spelling after his dominant all-the-way win at Eagle Farm earlier this month.