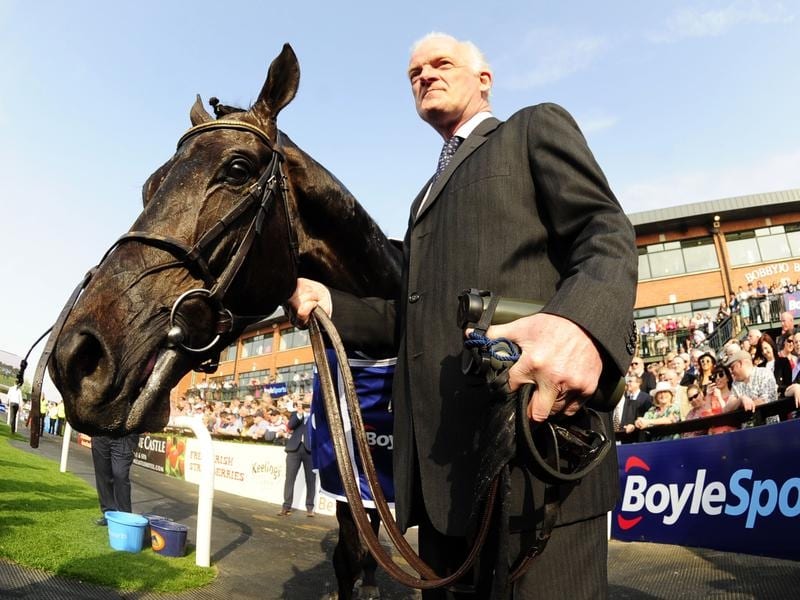 The well-backed 6-1 favourite was given a confident ride by Ruby Walsh to lift the first prize from Isleofhopendreams and Acapella Bourgeois.

Mullins, who also landed his first Cheltenham Gold Cup victory with Al Boum in March, admitted he had not expected Walsh to opt for Burrows Saint, but was more than satisfied with the result.

“Ruby was very confident throughout, but I thought Johnny Burke (Acapella Bourgeois) was too and all our riders rode the last mile fantastic.,” Mullins said.

“I was a little bit worried when Pairofbrowneyes fell early and then C’est Jersey followed him. I was thinking things are not working out well.

“Then I looked back and our horses were up in the front five or six all the time, and they were jumping great.

“That was the plan – to have everything jump off up there. Total Recall was too free, jumping too well and too free, and he just got tired.

“It was a tremendous result. It’s just been one of those years where we have done things that we haven’t done before.

Burrows Saint was having just his fifth start over fences, but his inexperience did not worry Walsh at all.

“I don’t really want to be taking part anymore, I want to win. That’s why I went for the unexposed horse.

“I’m delighted to have ridden Willie’s first Irish National winner. I joined Willie when I was 16, nearly 24 years ago and it’s a long time not to fall out with someone!”