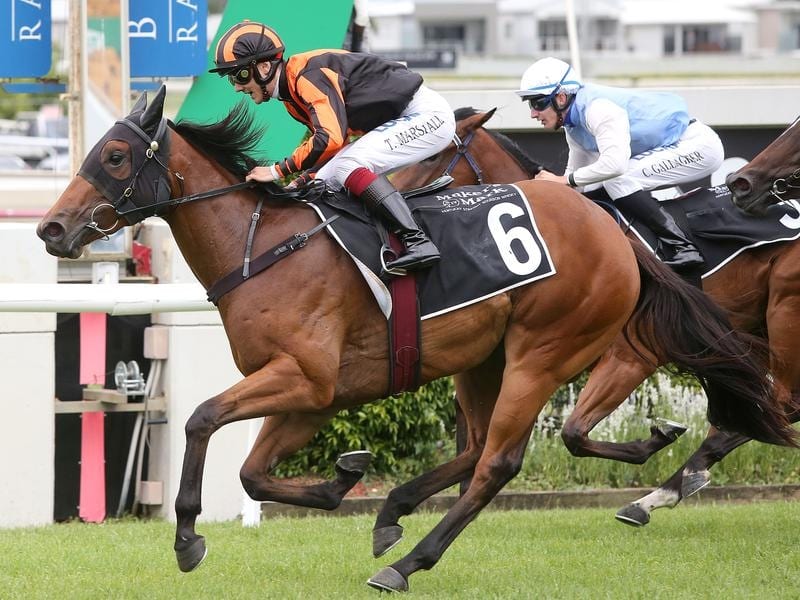 Tough filly Oh Five Glory is an outsider in the Magic Millions 2YO Classic but in the eyes of her co-trainer Peter Hulbert she should be one of the pin-up girls for the sales and race day at the Gold Coast.

Oh Five Glory ran second at Doomben at her first start and then won at the same track last month.

She had her final warm-up for Saturday’s Classic (1200m) when sixth behind Godolphin’s Exhilarates at the Gold Coast last Saturday with the winner now favourite for the big race.

Hulbert trains the filly in partnership with his son Will and has already tasted Millions day success with an outsider when Endless Shadow won the Fillies and Mares race in 2015.

He believes the sales-related day isn’t just for the elite and his owners are thrilled to be part it.

“The Classic and all the races on Millions day are a chance for the little bloke to take on the rich and famous,” Hulbert said.

“I mean we are realistic. To just make the Classic field is great but if she can finish in the top half dozen we would be ecstatic.

“Her run last Saturday was solid and we were drawn off the track.

“This time we have the ideal barrier for her in six and we know the 1200 metres will suit her.”

Oh Five Glory is raced by a group of Wests Tigers NRL fans and she is named to honour the side’s 2005 grand final win.

“They were underdogs that year so who knows,” Hulbert said.

Oh Five Glory will also be the sentimental favourite in the race as she will be ridden by Taylor Marshall, the son of Melbourne Cup-winning jockey John Marshall who died last month.

The filly’s sire Unencumbered, who won the Millions in 2014, died on the same day Oh Five Glory was sold at the 2018 sale.

Oh Five Glory isn’t the only hope the Hulberts have on Millions day with Endless Days a genuine chance in the Trophy (2200m).

“He wasn’t far from them last year and this time we have been sure he would get a run so we have been able to target his campaign,” Hulbert said.

Former Classic favourite Yes Yes Yes has been scratched at trainer Darren Weir’s request after having to travel from Victoria by float when a flight could not be secured.

He was found to be sore when he arrived on Thursday and although he improved overnight, Weir thought it was in the colt’s best interests not to run.