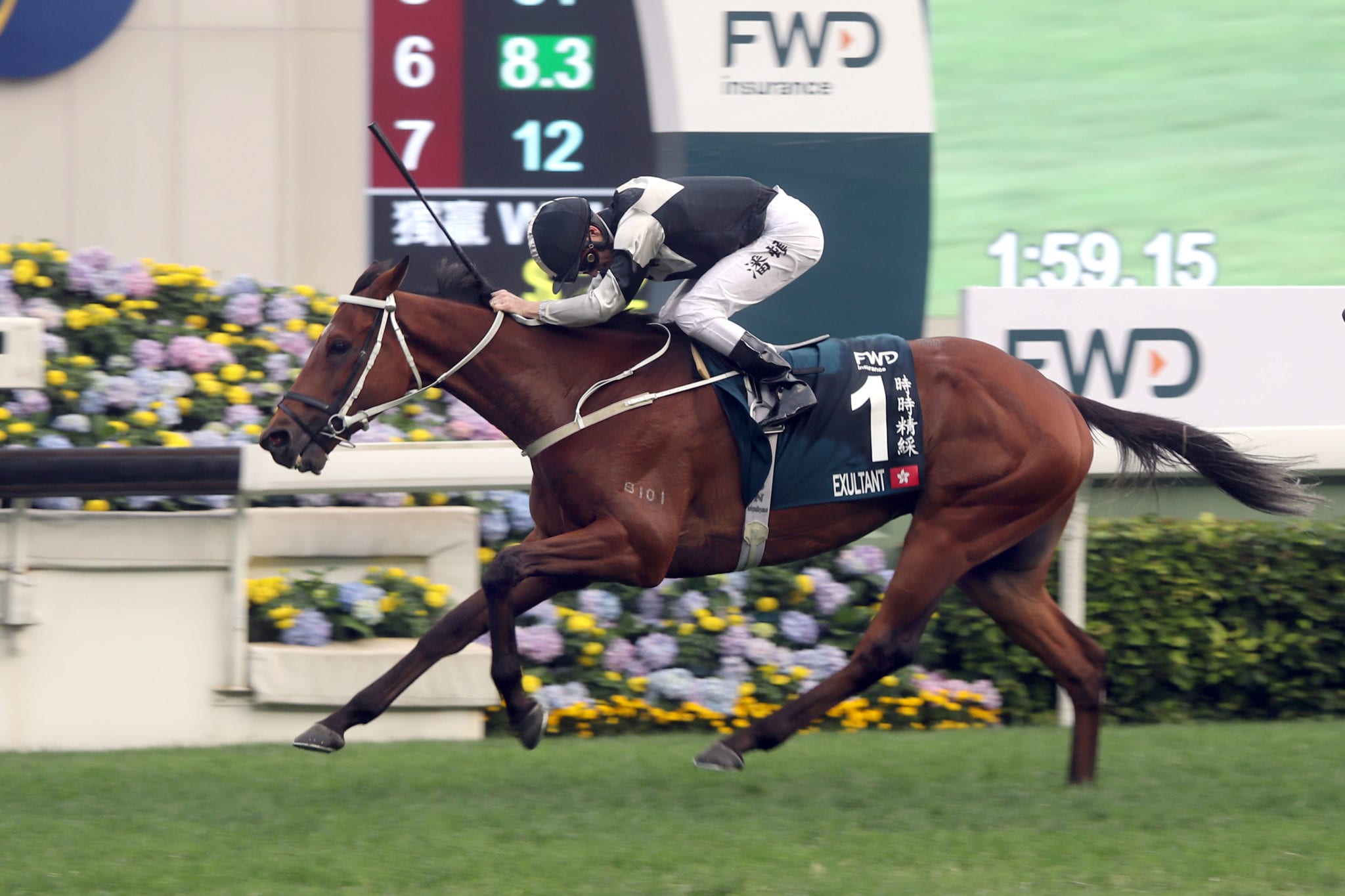 Zac Purton was elated and deflated at the end of Exultant’s glorious, grinding victory in the HK$25 million Group 1 FWD Queen Elizabeth II Cup at Sha Tin on Sunday, 26 April.

The brave bay’s willingness to stretch for his rider through every demanding stride of the 2000m feature meant the champion jockey became the only rider in history to have won every Group 1 race on the Hong Kong calendar.

“The feeling going over the line – it was a combination of everything!” Purton said. “I’ve come close to winning this race so many times, it’s been very frustrating and after missing the bob in the previous race, to win this was a sense of relief.”

Purton’s day had not lived up to his hopes until the Tony Cruz-trained Exultant produced a typically rugged yet classy run to ensure the jockey finally got his hands on the one big trophy that had hitherto eluded him. Disappointment was raw less than two hours prior when he eased the defeated young gun sprinter Aethero across the line after the chestnut bled in the Group 1 Chairman’s Sprint Prize, and then Beauty Generation’s head dipped down an exasperating second in the Group 1 Champions Mile.

The Australian was not about to let the last of the three FWD Champions Day features slip away though. Last time out in the Group 1 Hong Kong Gold Cup (2000m), stablemate Time Warp, under Joao Moreira, stole a march and held Exultant’s late rattle; this time, wise to Moreira’s steadying of the pace up front, Purton made a long run from the 1200m point to press the Brazilian’s mount.

“I didn’t want a repeat of last time, that didn’t go well for us. I had planned to be outside in the run but my guy showed no speed early so I just had to wait until we got around that first corner and then allow him to move into the race,” Purton said.

The tactic worked. By the time the two horses turned off the home turn, both were already under strong driving; Time Warp soon cried enough and Exultant, ever the warrior, battled into the clear – but with 200m remaining, Purton was not certain that success would be his.

“I was flat, I was empty – I wasn’t that confident,” he said. “My fella, at the 300-metre mark, was just starting to struggle a little bit. Down to the 200 (metres) I knew there was a horse coming and I could sense my bloke was at his bottom, he didn’t have anything else, so I was certainly worried, but my guy, he just kept galloping along and did enough.

“It means a lot to now be the only jockey to have won every Group 1 race in Hong Kong. It’s not an easy thing to do and it’s an achievement I’m very proud of – a Group 1 race is hard to win, as I’ve found, but that’s why they’re Group 1, they’re not easy and they should never be easy. The competition is tough so to go home and have finally won this race today, I’m still going to go home a little bit flat but I’ll go home very thankful that this trophy is now on the mantelpiece.”

Exultant held on by three-quarters of a length from Furore, who closed off grittily under Karis Teetan to give Cruz a stable one-two. The winning time was bang on two minutes.

“Exultant’s a tough customer and I don’t think he’s at his best at the moment, I think he’s doing it on heart. He showed once again just how tough he is and it was a great performance, he just ran them into the ground and that’s what he’s best at,” Purton added.

Cruz was pleased with Furore’s run, though disappointed that Time Warp faded out of the first three as old hand Eagle Way ran on for third under Neil Callan.

“I expected Exultant to win but if he didn’t perform, Furore was always going to run a good race too and I’m very happy with his run,” the handler said.

“Exultant will go the same route as last year. He’ll go to the Champions & Chater Cup next month, that’s the only race left. Furore will go there too.”

Teetan could not add a second Group 1 on the day, having taken the Chairman’s Sprint Prize (1200m) on Mr Stunning, but was delighted with Furore’s effort in chasing the winner right to the line.

“He ran so well,” the Mauritian said. “I had a perfect position and was just tracking them through. Exultant took on Time Warp earlier than expected so I didn’t pressure my horse too hard. I got onto Exultant’s back to track him into the race and he just kicked three lengths clear as we turned into the straight.

“My horse kept giving but Exultant is too good. He’d taken on Time Warp a long way out so I thought he’d have to come back but he didn’t, he just kept grinding in front. But all credit to Furore, he tried hard.”