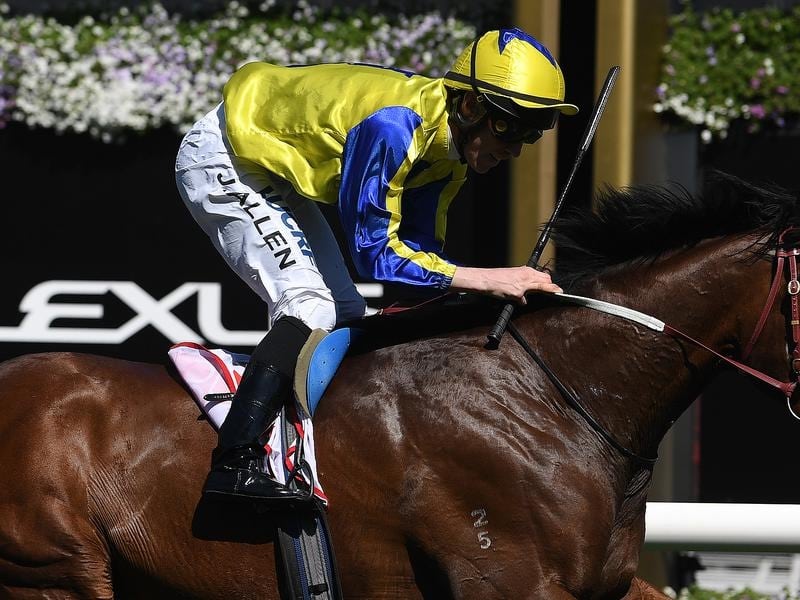 Lightly raced three-year-old Extra Brut has continued his rise through the ranks with a strong win in the Listed UCI Stakes at Flemington.

Extra Brut was having his fourth start on Saturday having won a Sandown maiden and a Caulfield open handicap for three-year-olds at his past two starts.

Stepping up to 1800m for the first time, Extra Brut ($4.60) chased down Lindsay Park-trained Sikorsky ($8.50) to win by 1-1/4-lengths with his Darren Weir-trained stablemate Savoie ($2.70) the same margin away third after leading.

“I thought both horses ran really well and Extra Brut was very strong late in the race,” Weir said.

“I was a bit keen to ride him quietly from the wide barrier but he (jockey John Allen) got him into a lovely spot, three-wide with cover, and I loved the way he stretched out late.”

Weir said he was unsure about the next spring steps for the colt who moved to equal $7 favourite for the Victoria Derby (2500m) immediately after Saturday’s win.

Weir described the $350,000 Group Three Caulfield Classic (2000m) in two weeks as “the perfect race” for Extra Brut, while he also holds a nomination for next Saturday’s $2 million Group One Caulfield Guineas over 1600m.

“He could be a chance,” Weir said of the possibility of backing up in the Guineas.