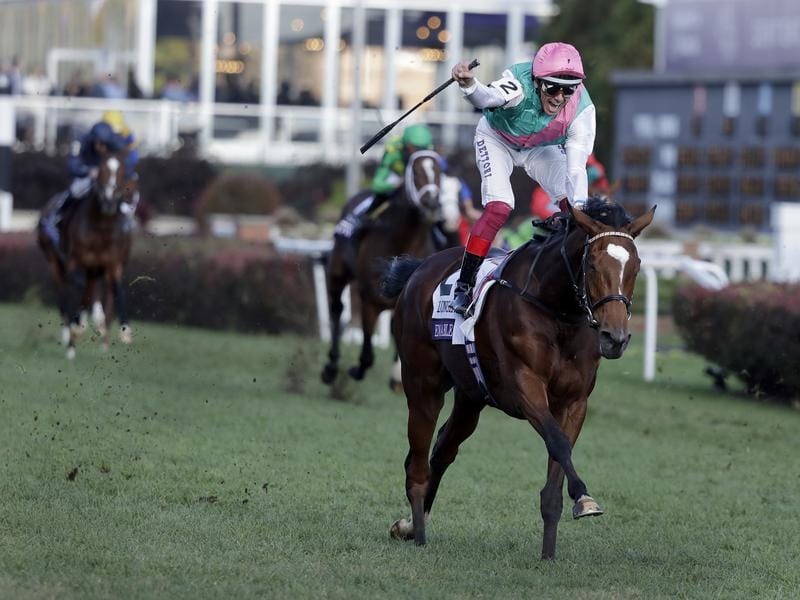 British star Enable has come out on top in a battle with Magical to win the Breeders’ Cup Turf at Churchill Downs in Kentucky with the pair well clear of the rest of the field.

Frankie Dettori rode the dual Prix de l’Arc de Triomphe winner who was challenged hard by Ryan Moore on Coolmore’s Magical all the way down the middle of the straight, but got on top in the final half-furlong (100m).

The John Gosden-trained Enable is the first Arc winner to have success at the Breeders’ Cup meeting in the same season.

“It was a big ask for our filly, and she greatly deserved it. It was a tough race, and Frankie wanted to stay wide,” Gosden said.

“When Magical slipped up her inner, I thought, ‘This is the one we’ve got to beat’, but she is mentally so strong and I think it was her mental strength as much as anything that brought her home in front.

“She’s had a difficult year and really it’s amazing she’s here today. She showed enormous courage, beating a very high-class filly, and it was interesting that they came well clear of the third.

“Maybe she’s getting better. She did it today with sheer guts and determination. It’s wonderful for her owner-breeder Prince Khalid Abdullah. He was keen to come here and has been rewarded.”

Dettori said he steered Enable wide to get on fresh ground and she responded.

“She’s conquered America! She’s the first one to do it. Amazing, I’ve no words to say how brilliant she is,” he said.

“We had two inches of rain this last 48 hours and her wheels were spinning round the bend, so I took her on a wide trip to get her on fresh ground and then she was comfortable.

“I went for the better ground and she found another gear. She’s very special.”