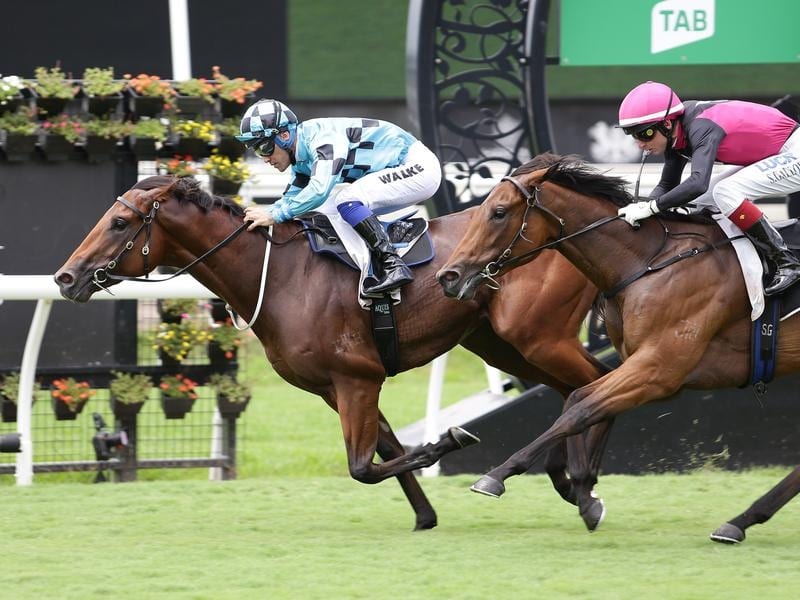 Magic Millions runner-up Dubious puts his Golden Slipper credentials on show in the Todman Stakes but his trainers are keeping an ace up their sleeves for the colt’s grand final.

Dubious won the Breeders’ Plate on debut at Randwick last spring and won again in Brisbane in December before being chased down late by Exhilarates in the $2 million Magic Millions Classic at the Gold Coast in January.

Dubious has had blinkers on in two barrier trials in the past month but his co-trainers Ciaron Maher and David Eustace have held off applying them for Saturday’s Group Two Todman Stakes (1200m) at Randwick, one of the traditional lead-up races to the Golden Slipper two weeks later at Rosehill.

“He ran a super race. He’s not lazy but he’s just relaxed so he was probably chasing the game just a little bit in the Millions and we just think the blinkers will help him travel, which they definitely will.

“But we just wanted to save them for the Slipper and have that desired effect on the big day.”

Maher will be in Sydney for the Randwick meeting while Eustace is excited to watch the colt’s return, anticipating the Todman to be the right pointer to the Golden Slipper.

“I think the winner of the Slipper will probably come out of that race.

“Gary Portell’s horse (Time To Reign) looks very good. He was very good the other day (Silver Slipper) and obviously that whole team know how to win a Slipper. So he would be the one I’m most worried about.

“Dubious should get a lovely run from barrier five and he hasn’t actually been able to get back and run on yet. I think that’s possibly where he will be most suited.

“By design of draws etcetera, he’s had to be wide and chasing a little bit. In the Millions he was on the fence but I think if he was midfield, one off the fence and chasing I think he’ll be really good.”

Eustace said Dubious had been aimed towards the Slipper since the Breeders’ Plate and while he had not grown since his last start he had got stronger.

“The two-year-olds improve, but you never quite know how much until you run them,” he said.

“He needs to improve but probably not by much to be at the very top.”