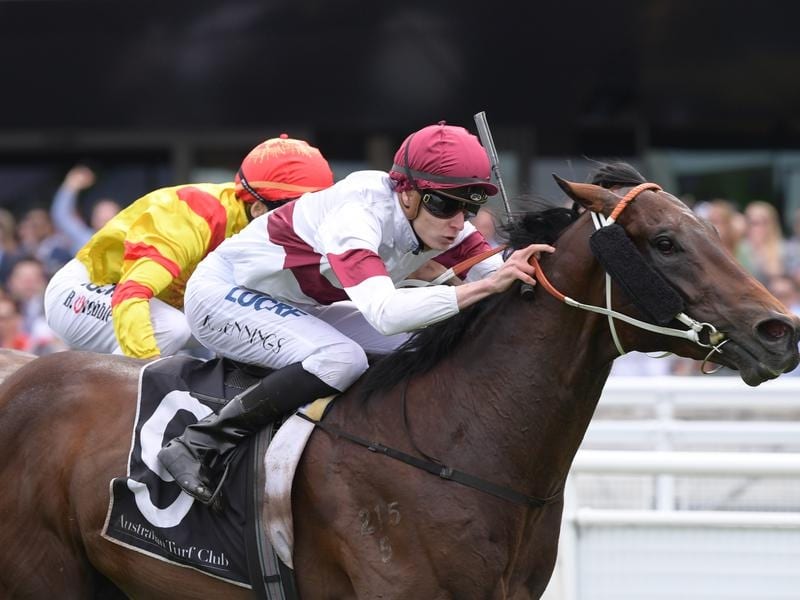 Being an expensive yearling brings with it racetrack expectation.

And high-priced colt Diplomatico has earned his opportunity on the big stage to deliver a Group One win in the Coolmore Stud Stakes at Flemington on Saturday.

Diplomatico has emerged as a genuine contender for the straight-track 1200m sprint.

“He was a $1.7 million yearling so it would be a big story if he could get the job done,” co-trainer Wayne Hawkes said.

“He won his maiden not long ago and then he won the Brian Crowley Stakes on a wet track which he didn’t like.

“He’s a number one draft pick but that doesn’t mean that you can gallop. But he obviously can.

“He’s here and he’s in good form but he will be some horse in the autumn, that’s for sure.”

Diplomatico faces field rivals including Group One Blue Diamond Stakes winner Written By whose only defeat in seven starts was a fourth in this year’s Golden Slipper, won by the Hawkes-trained Estijaab.

Sunlight was third in that Golden Slipper and she is the only filly in Saturday’s race, backing-up after a luckless seventh at weight-for-age in last Friday night’s Manikato Stakes.

He has strong chances again, saddling up two sons of Zoustar, Zousain and Lean Mean Machine.

Zousain has twice finished a close second to star stablemate The Autumn Sun in Group One races this year and was holding slight favouritism at $4 on Thursday ahead of Written By ($4.20) and Sunlight ($4.60), with Diplomatico $8.

“They’ve got the experience and that’s what we don’t have,” Hawkes said.

“We’ve got the ability but we don’t have the experience and you can’t buy experience.

“So he needs to do everything right and be on song and really give his best. But he’s got a beautiful big action and if he can handle the straight he’ll give them something (to beat).”