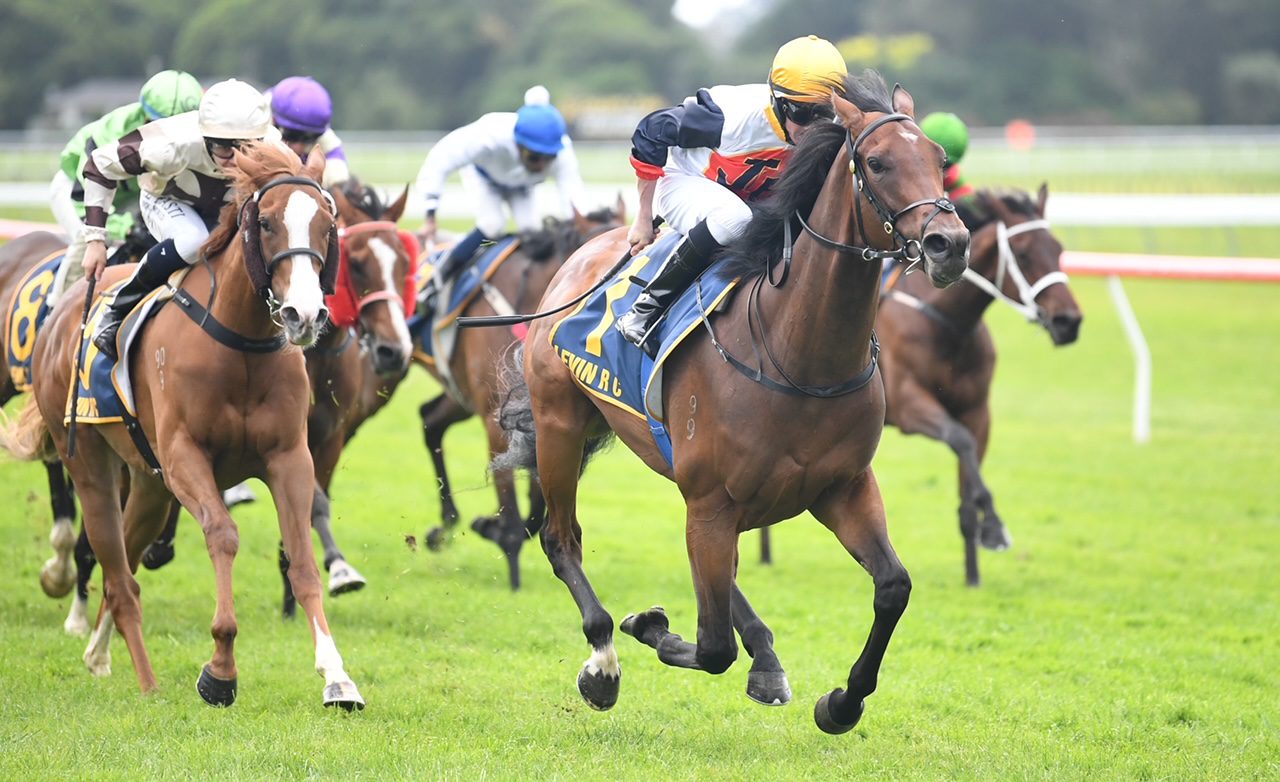 Devastate continued his rapid progression with a successful return to Otaki on Thursday to add the Group 3 Wellington Stakes (1600m) to his record and continue a dream run for trainer Andrew Forsman.

The son of Rich Hill Stud stallion Vadamos completed a double for the stable following the earlier debut victory of Bella Regazza in the Foxton Fish & Chippie 2YO (1100m).

Forsman posted his eighth stakes victory this season with the win of Devastate, with four on either side of the Tasman, while the progressive winners have continued to flow as highlighted by a winning double at Avondale on Wednesday with Full Of Sincerity and Imarichgirl.

Devastate had finished runner-up first time out at Otaki in late September and subsequent wins at Matamata and Tauranga had him in prime order to claim the three-year-old feature.

The gelding also successfully defended the stable’s title in the race, Forsman in partnership with Murray Baker having produced White Noise to score 12 months ago, and he later won the Listed Gingernuts Salver (2100m) and was a creditable seventh in the Group 1 New Zealand Derby (2400m).

Devastate also holds a nomination for the Derby, but the more immediate focus will be on the Karaka Million 3YO Classic (1600m) to be run at Pukekohe on January 21.

“We’ll get him home and give him two weeks in the paddock and then get him ready for the Karaka mile fresh-up,” Forsman said.

“After that, we’ll go to the Guineas races and then hopefully on to the Derby.”

Devastate jumped well to make the running and he was willing in the straight to credit Irish jockey Joe Doyle with the first stakes success of his New Zealand sojourn.

“There was no tempo in the race and we always thought we would be right up on the pace. It wasn’t going to be ideal, but he was good enough to get away with it,” Forsman said.

Sheez Dominant raced on the leader’s quarters and boxed away gamely to hold second with another filly in Pennyweka making late headway for third.

Doyle was delighted to land his first stakes victory, having arrived in New Zealand a matter of weeks ago.

“It’s fantastic. All credit to Andrew Forsman and his team, I was on much the best horse in the race,” Doyle said.

“Credit to the horse. He went out and did it the hard way by making the running. Andrew just said not to fight him and he picked up all the way to the line.

“When we turned for home I felt them getting close but I had so much horse underneath me, I never really thought I would get beaten.

“I am very grateful to everyone who has put me on and long may the success continue.”

Bred by Sir Patrick and Justine Lady Hogan, Devastate was purchased out of Carlaw Park’s draft at Karaka by bloodstock agent Bruce Perry for $160,000 for an ownership group that includes James Chapman’s Jamieson Park.

He is out of the Pins mare Passion Cut, who Chapman bought last year for $40,000 via gavelhouse.com , and the unraced mare is from the famed Eight Carat family.

Passion Cut produced a colt by Priosir last season and has subsequently returned to Vadamos.

Devastate’s stablemate Bella Regazza quite literally bit the hands that are going to be feeding her in the immediate future when she downed the favourite Dapper.

“She has always showed good, natural ability much like her mother so hopefully she can back it up at Trentham,” Forsman said.

Bred and raced by Lib Petagna’s JML Bloodstock, Tivaci filly Bella Regazza is the first foal of the Per Incanto mare Ramazzotti, whose racing career came to a premature end after a two-year-old victory and a third placing in the Listed Waikato Equine Veterinary Centre Stakes (1100m).

Ramazzotti, who has a yearling Ardrossan filly, comes from a well-performed North American family that features the Group One winner and sire Success Express, who made an impact in this part of the world.

Bella Regazza’s two-start Central Districts campaign gained momentum after she had finished runner-up at the Cambridge trials earlier this month.

“We thought she showed enough that day to go to the races and this was the first suitable option,” Forsman said.

She was quickly into stride for rider Wiremu Pinn to sit outside the leader and rallied strongly after hitting the front on straightening to hold out previous course winner Dapper.