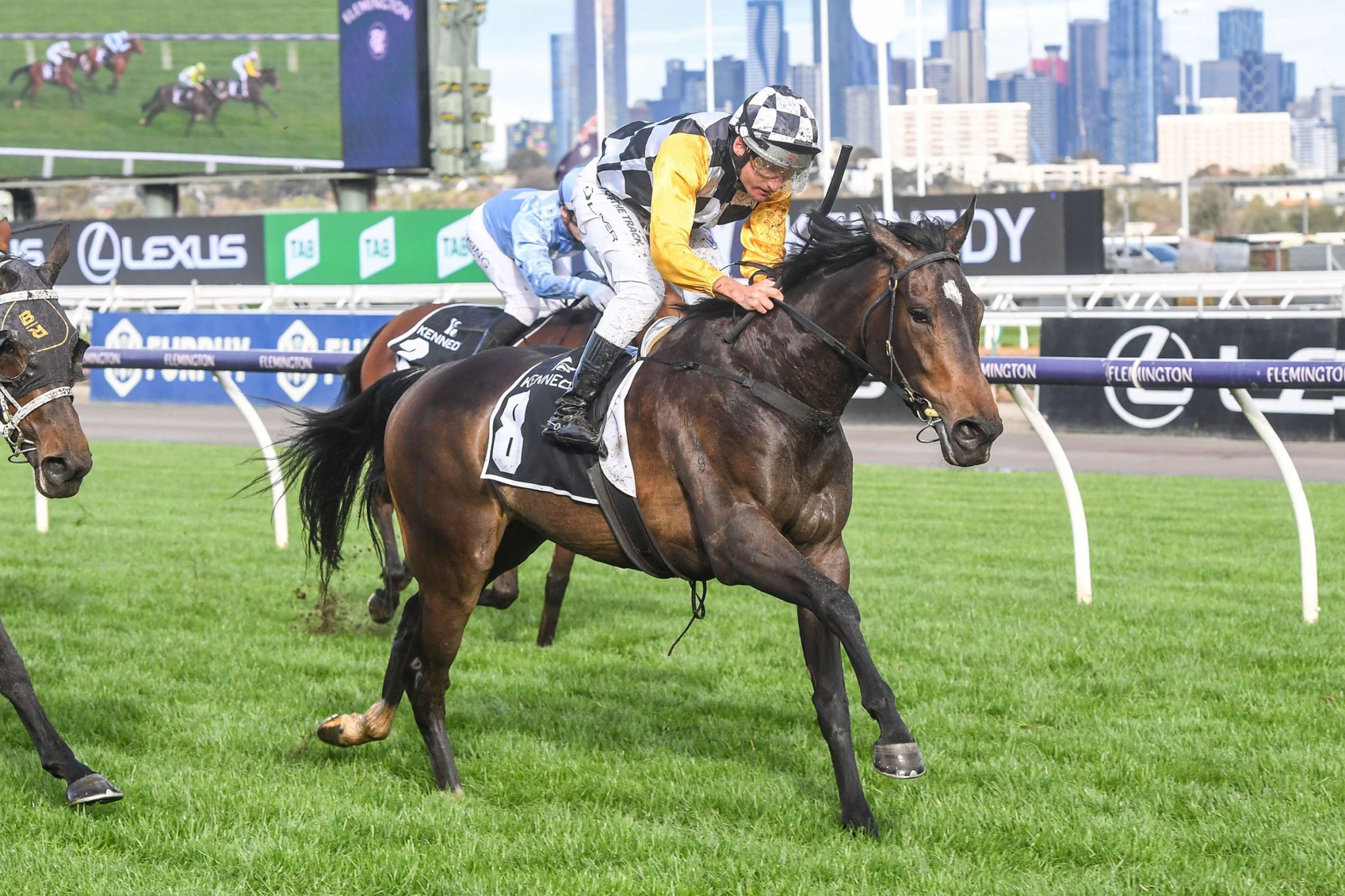 Beaufort Downs may be one of the youngest thoroughbred nurseries in New Zealand, but they are already starting to leave their mark on the Australasian racing landscape.

The North Canterbury Farm has been in operation for less than five years and look to have bred one of the leading contenders for the Group 1 VRC Oaks (2500m) in So Dazzling.

The daughter of So You Think stamped her mark this spring with a three-quarter of a length victory in the Oaks Preview (1800m) at Flemington on Sunday, putting her in pole position for the rich classic in November.

Beaufort Downs principals Annabel and Olly Tuthill were rapt with the result and are excited about the prospects of the filly they sold through their 2021 New Zealand Bloodstock draft for NZD$200,000 to bloodstock agent Duncan Ramage and trainer John Sargent.

“We were thrilled. We are a young farm just getting going and it is always nice to get good winners with a bit of potential. Hopefully she carries on,” Annabel Tuthill said.

Reflecting on So Dazzling’s time at Beaufort Downs, Tuthill said she was always struck by the filly who has inherited her dam’s (Dazzling Lady) gentle demeanor.

“She was the easiest filly with a lovely temperament,” Tuthill said.

“The mare has got a really lovely temperament too and all of her foals have been easy. That is always a help when they have a nice temperament.

“She did everything right. For us it is quite a long trip up to the sales to come all the way from the South Island, they either handle it or they don’t and she handled it really well.

“There was so much interest in her and she paraded well every day. She walked out like a little professional, so everyone really liked her. We were really happy with the result.”

Dazzling Lady could prove to be a lucrative foundation mare for the farm, with Tuthill thrilled about her other progeny.

Originally purchased as a yearling out of Cambridge Stud’s 2014 New Zealand Bloodstock Premier Yearling Sale by Trevor McKee for NZD$70,000, she went on to win two races for his son Stephen.

Tuthill happened across the mare in Australia when looking to build a broodmare band for Beaufort Downs and was eager to add her to the farm’s line-up.

“We bought her over on the Gold Coast. When we were first starting out we were trying to get a few mares to get going,” Tuthill said.

“I went over with my Dad and we really liked her. We went a little bit over what we thought (we would have to pay) but she is a lovely mare and we are quite happy with her and she has paid us back, which is good.”

The farm’s first offering out of the mare was a year older full-sister to So Dazzling, who was purchased by Cambridge trainers Roger James and Robert Wellwood for NZD$75,000.

The Lonhro mare has since had a Tavistock filly that the couple have retained, as well as So Dazzling and a yearling colt by Microphone, and she is set to foal to Cambridge Stud’s new stallion Hello Youmzain.

“We have got a Tavistock filly sitting in the paddock here that we are going to race,” Tuthill said.

“We had her for the sales last year but she got injured. At the time it was devastating but now we are quite happy that we have got her to race and breed from in the future.

“She is set to foal a Hello Youmzain in the coming weeks and we have got the Microphone colt for Karaka next year.

“He is a lovely colt – a little power pack. He is really strong and nice.”

Little Avondale Stud stallion Per Incanto is currently at the top of the list for Dazzling Lady’s mating this season.

“She will foal down here and then we will probably send her to Per Incanto. We have sent one to Per Incanto most years, we really like him,” Tuthill said.

Tuthill and her husband Olly are loving life on their North Canterbury farm, and graduates like So Dazzling only add to their enjoyment.

Tuthill, a cousin of Ingelwood Stud principal Gus Wigley, has always had a love for horses and was previously involved at the highest level of eventing when competing in Europe where she met her now husband, who represented England in polo.

“We spent quite a bit of time in England. Olly was playing polo over there and I was doing eventing. We had an amazing time, it was awesome,” Tuthill said.

“I was the reserve for the Beijing Olympics (with the New Zealand team), I just missed out on that which was a shame. It was a great experience competing at Burghley and Badminton.”

While she loved her time in Europe, Tuthill was intent on coming home to raise a family and establish her own thoroughbred breeding operation.

“We both knew we wanted to live in New Zealand, all of my family is over here. We both love New Zealand and wanted to raise our kids here,” Tuthill said.

“Mum and Dad bred horses, and Gus Wigley, my cousin, he was right into it with the stallion. He really helped us out a lot and got us going. We have just loved it ever since.”

The farm’s best result at the yearling sales has come from a yearling bred out of Highly Valued, a mare they sourced from Tattersalls on their way home to New Zealand.

“When we decided to come back to New Zealand, I sold a couple of my eventers over there and we went to Tattersalls to buy some mares to bring home,” Tuthill said.

“We sold a No Nay Never colt last year for NZD$280,000. The dam (Highly Valued) is out of a full-sister to Showcasing, so it was nice to get into some of the nice families over there.”

The Tuthills are looking forward to the yearling sales next year and they are hoping some of their graduates, like So Dazzling, can aid their cause over spring.

“We have entered nine yearlings,” Tuthill said. “We have been going for about four years now and we love it.

“We have got 13 mares of our own and we have got a few mares for clients, and we do some racehorse spelling which keeps us busy.”