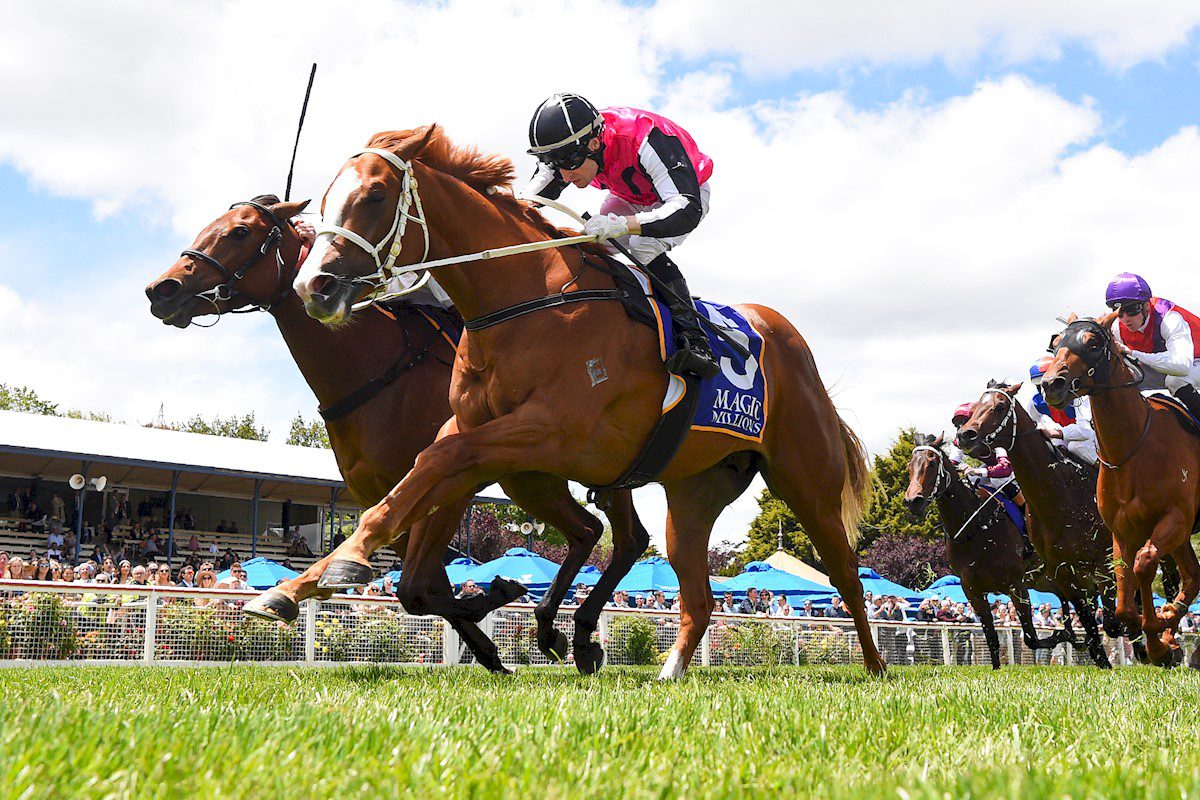 With less than a month until the Gold Coast Magic Millions Raceday, Trent Busuttin & Natalie Young’s Cusack sits atop the order of entry for the Magic Millions 2YO Classic.

Steve O’Dea & Matthew Hoysted’s undefeated galloper Palazzo Spirit sits second in the order with $136,400, while fellow Queenslander Mishani Warfare lies third with $128,550 after another victory at the Sunshine Coast on last Friday in a 2YO Handicap over 1000m.

Sitting comfortably in fourth and fifth in the ballot are two New South Wales-trained fillies who also top the market for the January 15 feature.

Annabel Neasham’s Soaring Ambition is the +650 second favourite after a dominant win on debut in the Magic Millions Wyong 2YO Classic last Wednesday, while short-priced favourite Coolangatta is set to make her Queensland debut on Boxing Day.

The Ciaron Maher & David Eustace-trained filly won her only start to date in the Group 3 Gimcrack Stakes at Royal Randwick on October 2, which sees her rated a +120 favourite for the 2YO Classic.

Coolangatta will line up in Sunday’s B.J. McLachlan Stakes over 1200m at Doomben, where she will be up against some of Queensland’s top two-year-olds in Palazzo Spirit and the Peter & Will Hulbert-trained Heroic Son, as well as the highly touted New Zealand filly Bright Blue Sky.

Heroic Son looks to have secured his spot in the $2 million race on the Gold Coast next month, with the stable confident the colt can measure up.

“I’d say he’d be in where he’s at now with the amount of prizemoney, but more is always good,” co-trainer Will Hulbert told Racing Queensland.

“He’s just a beautiful horse; he’s just been a natural from day one.

“From day one, he just knew exactly what he wanted to be – just a little professional racehorse.

“He’ll have a gallop on the course proper Wednesday morning, and then we’ll head to the race Sunday and see where we’re at against the good two-year-olds from down south.”

The son of Heroic Valour has earnt a tick over $60,000 to date, with one win, a narrow second and a third coming from his three career starts; however, the market hasn’t taken a liking to him ahead of the B.J. McLachlan, with TAB adding the colt as a +10000 chance in its early markets.

Sitting on the brink of gaining a start in the Magic Millions 2YO Classic are Bright Blue Sky (17th) and Hard To Say (20th), and both gallopers could bolt up the order with a prominent showing in the B.J. McLachlan, where the first four horses past the post are likely to move into the top 12.

Coolangatta dominates the market for the B.J. McLachlan, with online bookmakers rating her a -333.33 chance, ahead of Bright Blue Sky (+500) and Swiss Exile (+700).