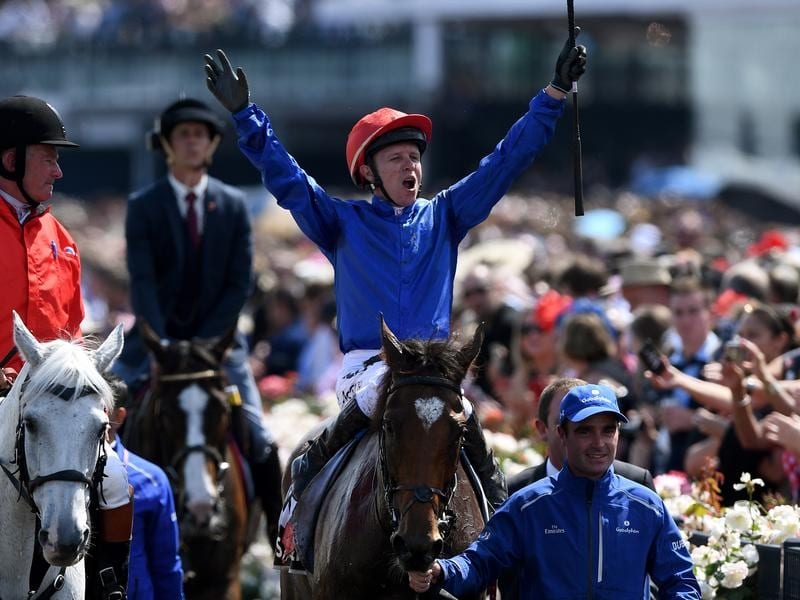 Sheikh Mohammed has capped his worldwide investment in horse racing with Cross Counter’s win in the Melbourne Cup, a race the Dubai ruler has been trying to win for 30 years.

The Godolphin team sent out three runners from three different trainers on Tuesday – Cross Counter (Charlie Appleby), Best Solution (Saeed bin Suroor) and Avilius James Cummngs) – with the youngest of the trio coming out on top.

Like last year’s winner Rekindling, Cross Counter is a three-year-old by northern hemisphere time and was hand-picked by trainer Charlie Appleby as the right horse for the gruelling 3200 metres of the Cup at Flemington.

Kerrin McEvoy, already the winner of two Cups on Brew in 2000 and Almandin in 2016, put his hand up for Cross Counter some weeks ago.

McEvoy steered Cross Counter ($9) over from barrier 19 and took up a position near the rear of the field.

He avoided trouble when The Cliffsofmoher broke down and Avilius faltered in the incident, and kept Cross Counter in his rhythm until the field turned for home.

“I was back a bit further than what I wanted,” McEvoy said.

“I had to go my own way and we were full of running. I thought mate, is this happening again?

“I’m just lucky I can ride light on these lovely stayers prepared unbelievably well by Godolphin and Charlie Appleby.

Marmelo ($12) briefly looked as if he would give Hugh Bowman a Cup-winning ride but Cross Counter was flying to the finish and went past him in the straight to win by a length.

A Prince Of Arran ($21) who earned his way to the Cup with his win in Saturday’s Lexus Stakes, was another two lengths third in a dream result for his young trainer Charlie Fellowes to give English-trained horses the trifecta.

Since his first unplaced runner Authaal in 1988, Sheikh Mohammed’s best results had been three seconds and two thirds.

A former assistant trainer to Mahmood Al Zarooni, Appleby was promoted to head trainer at the Newmarket stable five years ago and has had success in Australia over the past couple of seasons.

“I learned a lot two years ago especially about the type of horse you need here,” Appleby said.

“We decided not to run this horse after he ran second in the Great Voltigeur at York in August.

“It’s hard for a young horse to back up into a Melbourne Cup and it’s not easy to find three-year-olds who have the potential to do it.”

While Godolphin also concentrates on developing its stallion team, Cross Counter is a rarity within the operation as a gelding.

“He was very robust as a young horse and sometimes to become a racehorse they need to be gelded,” Appleby said.

The trainer admitted the rain at Flemington was a concern but the Cup ended up on a soft track after being heavy early in the day.

Cross Counter won the Cup at just his eighth start and got into the race with 51kg ruling out regular rider William Buick who was one of the first to congratulate McEvoy.

Apart from Glyn Schofield on Avilius, there were few hard luck stories from the jockeys apart from some horses being uncomfortable on the soft ground and others simply failing to stay the distance.