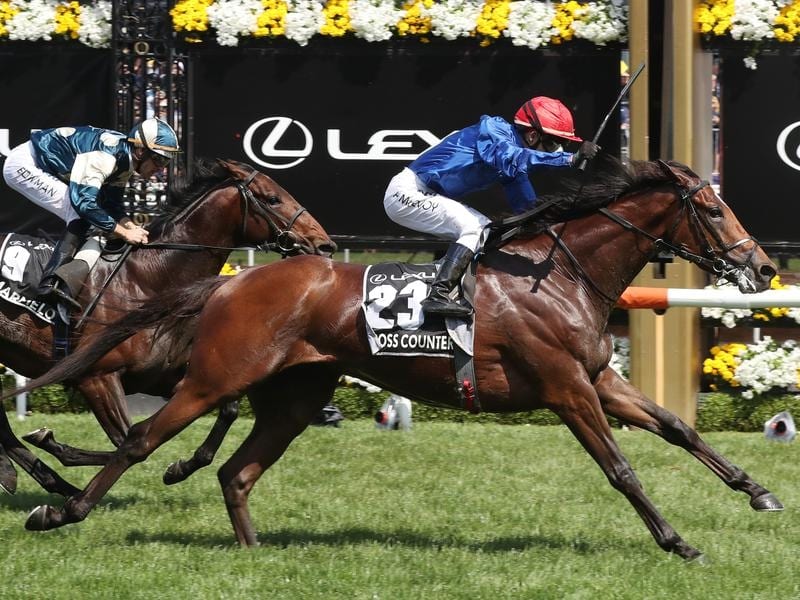 On a rain-affected track and ridden by Kerrin McEvoy for trainer Charlie Appleby, Cross Counter defeated Marmelo and A Prince Of Arran in an all-northern hemisphere finish.

One of the most influential racing operations in the world, the Sheikh Mohammed-backed Godolphin stable has been trying to win the Melbourne Cup since 1998.

Starting a $9 chance, Cross Counter settled in the second half of the field but producing a stirring finish to overhaul Marmelo ($12) who was being hailed the winner for Hugh Bowman.

McEvoy now has three Melbourne Cups after winning the race on Brew as an apprentice in 2000 and Almandin in 2016.

“I was back a bit further than what I wanted,” McEvoy said.

“I had to go my own way and we were full of running. I thought mate, is this happening again? And yeah look, I’m just lucky I can ride light on these lovely stayers prepared unbelievably well by Godolphin and Charlie Appleby.”

The race was marred by the Aidan O’Brien-trained The Cliffsofmoher breaking down as the field passed the winning post the first time.

McEvoy was a stable rider for Godolphin before parting ways to ride freelance in 2014.

Two of his three Cup wins have come since that move.

Appleby said it was every trainer’s dream to win the Melbourne Cup.

“This is all down to Sheik Mohammad. He’s the one that’s given us the encouragement to take the chances in what we do.

“We have campaigned over here the last three years now and have been competitive but we have always learnt each trip what horse we felt was going to be needed on the big day.”