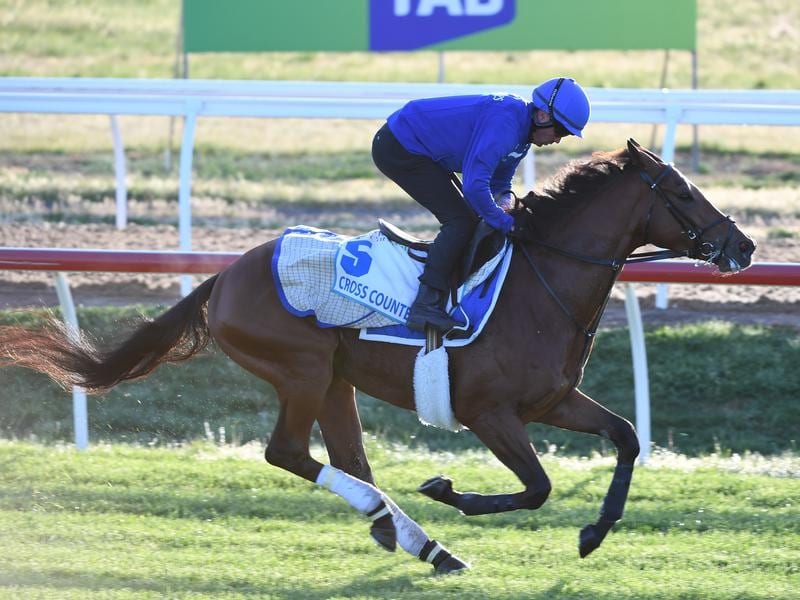 The Charlie Appleby-trained Melbourne Cup second favourite cantered a lap and three-quarters of the Werribee track on Tuesday and will do a stronger piece of work under race jockey Kerrin McEvoy on Wednesday.

Appleby’s travelling foreman Chris Connett said the stable was comfortable with where Cross Counter was fitness-wise heading to the Melbourne Cup after missing a week of work with a cut foreleg that required stitches and anti-biotics.

“He had a nice canter this morning and tomorrow will do his final big piece before the Melbourne Cup,” Connett said.

“Kerrin is coming down to have a sit on him and all going well it will be all systems go.

“He was very fit before he came out and had done a couple of pieces of work beforehand.

“Charlie just wanted to be extra cautious with the wound so he gave him that week as we had that bit of time to play with.

“We’re happy with him and he was coming off the track pretty fresh.”

While McEvoy will be having his first ride aboard Cross Counter ,fellow jockeys Hugh Bowman and Corey Brown will reunite with their Melbourne Cup mounts in gallops at Werribee on Wednesday.

The three international horses are all high up in Cup betting with Cross Counter and Magic Circle equal second favourites at $11 behind the Aidan O’Brien-trained Yucatan at $4.50.

Marmelo, who started a $7 equal favourite in last year’s race when ninth behind Rekindling, is a $15 chance.