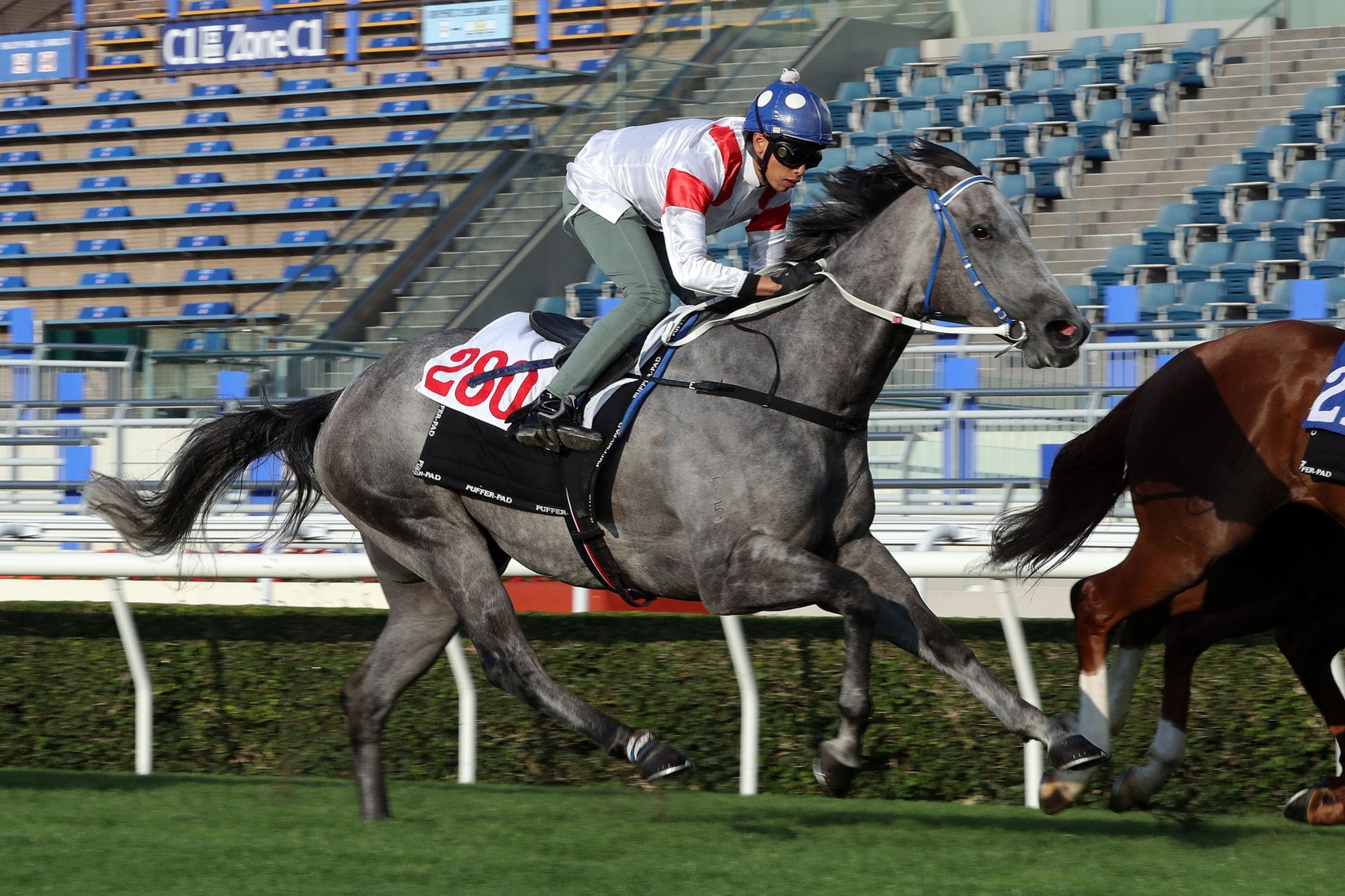 But while satisfied with the grey’s effort, trainer Caspar Fownes implied caution as he swiftly prepares the talented grey for his Hong Kong debut in the HK$22 million sprint contest on 13 December at the LONGINES Hong Kong International Races.

“Obviously he’s a bit rusty and he hasn’t had an ideal prep as I have been saying – I’m just doing the best I possibly can considering the time frame I have,” Fownes said of the Australian-bred five-year-old who arrived in Hong Kong only 23 days ago.

The Not A Single Doubt gelding settled at the rear of the field early on over 1000m on the Sha Tin turf under local ace Vincent Ho, before being pushed out to cross the line third behind Sky Field and Assimilate in a time of 58.67s.

“The trial was acceptable – it’s the first time he has been down the straight and he just picked up nice, did his job – he came back nice and we’ll scope him and make sure everything is A1 over there,” Fownes said.

“He just looked from the 100 metre-mark to the post that he would put them away but he just ground off a little bit, which obviously, his fitness will improve for that,” Fownes said.

Following his final Australian outing, the lightly-raced speedster spent close to three weeks in quarantine at the Werribee International Horse Centre, where he was still able to remain in work, before a flight to Hong Kong on 9 November.

“Everything has been a rush – it hasn’t been ideal, I know everyone is watching from around the world and they think it’s easy – it doesn’t work like that.

“The horse has to come in here, have a vaccination, he’s also been sedated for freeze-branding and he was only cantering at Werribee – I took no chances with him because I’m not there on the ground,” Fownes said.

“But all excuses aside, if he is the best and even if I present him at 85-90% he should be good enough but like anything you just have to hope they come here and adapt as soon as possible.”

Fownes indicated that his final gallop would likely determine the grey’s participation in the Hong Kong Sprint, a race that the handler won in 2011 with the brilliant Lucky Nine.

“I’m still learning about the horse – the preparation this horse has had, he’s come to me at the end of his prep, they built him up for the big grand swansong and they got the job done and I’ve just got to come in and try and pinch one more race before I freshen him up,” Fownes said.

“I’ll always do the right thing – if I’m not happy, I’ll do what it takes, the horse always come first, the owner is very good and I’ll be speaking to him and at this stage it’s all systems go and we’ll just make sure he pulls up well.

“I wouldn’t take much from the trial compared to race day and also around a turn and the 1000 metres has always been a specialist track, they just learn a little bit but on face value – not too bad, now we just have to see how he is and where his final gallop takes us.”

Fownes’s plans after Sunday week’s sprint include overseas targets, while an option at home is the season’s following Group 1 sprint contest, the HK$12 million Centenary Sprint Cup (1200m) on 24 January, 2021.

“It’s a bit of a juggling act and you’ve just got to hope on the day that he does what is required, but long term once he settles into Hong Kong then I can actually get to know him better and train him accordingly,” Fownes said.

“As you can see, he comes out there he has a bit of presence about him and hopefully he’ll make Hong Kong home and do really well for us and we get to travel with him because that’s where the money is and that’s where the horse should be going.”