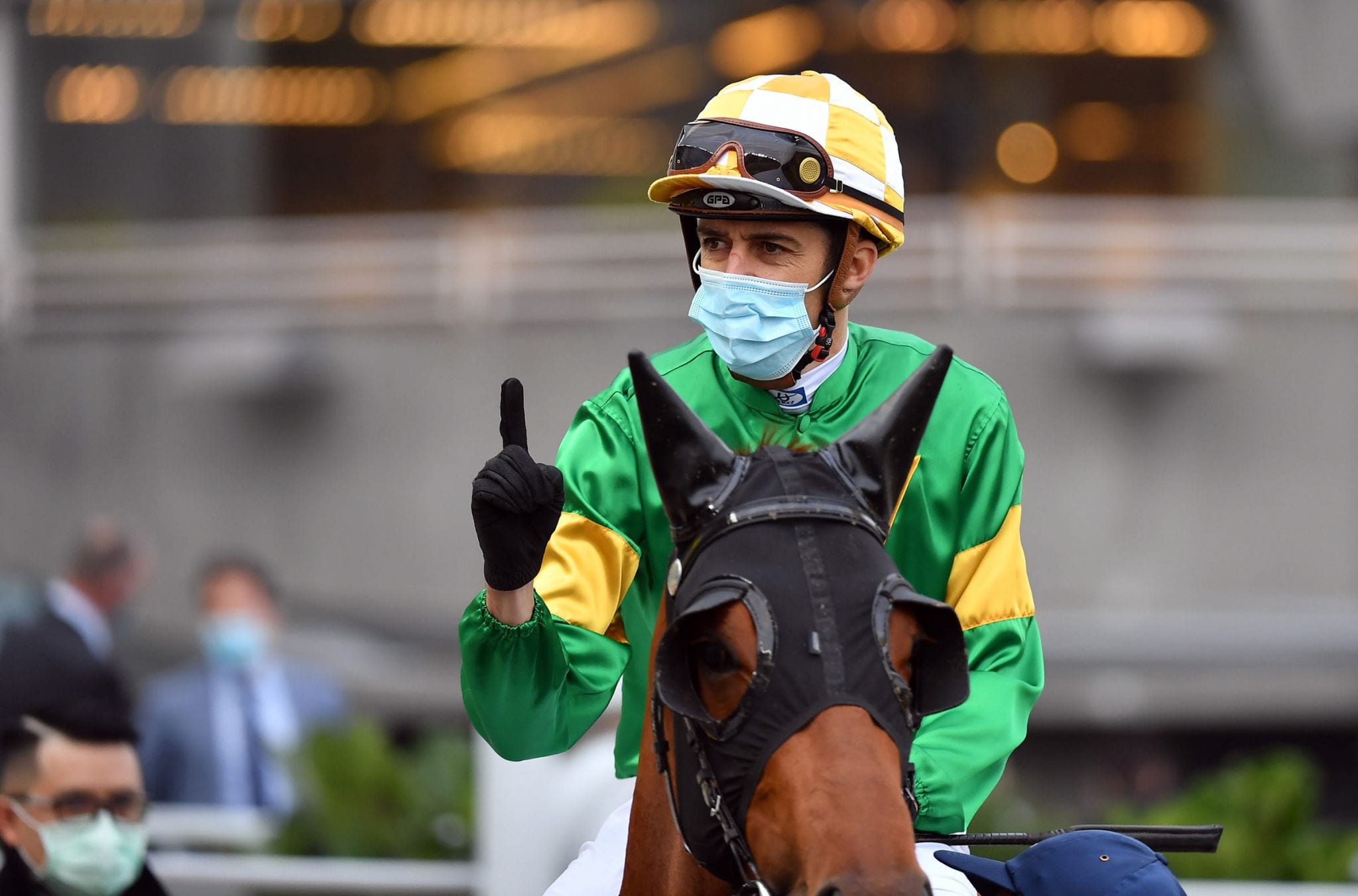 Christophe Soumillon has been eagerly awaiting the opportunity to add another Group 1 in Hong Kong to his impressive haul and today (24 January) at Sha Tin he gets his chance when he reunites with familiar ally Wishful Thinker in the first of two top-level contests on the 10-race fixture, the HK$12 million Group 1 Centenary Sprint Cup (1200m).

“I’ve been waiting – I knew I had some good chances at the Hong Kong International Races but unfortunately I could not ride – that’s life, we go through it and I’m thinking about the future – I’m living in the present moment and I’m very happy,” Soumillon said.

And then, after being unable to gain clearance to leave quarantine as scheduled in Hong Kong because of health protocols, Soumillon was forced to forfeit the mount on Normcore, who two days later claimed the HK$28 million Group 1 LONGINES Hong Kong Cup (2000m).

But the globetrotting Soumillon – who has won Group 1s in Europe, Japan, Dubai, USA, Canada and Hong Kong – is upbeat and squarely fixed on future positives, and since his Hong Kong return has been in sparkling form with seven wins from 61 rides among 25 top-three finishes.

But today’s coupling with Wishful Thinker is his first Group 1 ride in Hong Kong since his pairing with the horse in this race last year, which came just over a month after his win on Admire Mars in the 2019 Group 1 LONGINES Hong Kong Mile.

“I rode him (Wishful Thinker) for luck two years ago in the Hong Kong Sprint and also in this race last year, he came home well but he just couldn’t give the final kick over the last 200 metres – he needs a strong pace but I do think the field is quite open this year,” Soumillon said.

Two starts prior to Wishful Thinker’s close-up fourth at +4100 in last month’s Group 1 LONGINES Hong Kong Sprint (1200m), the seven-year-old snared the 2020 Group 2 Premier Bowl Handicap (1200m) in October and, Soumillon is hopeful of a similar fast-finishing effort from the I Am Invincible gelding.

“He’s drawn well but unfortunately he is jumping slow – I just hope the pace is strong enough to make sure he can finish off strongly – much like he did three starts ago in the Premier Bowl when he came down the outside to catch Computer Patch on the line – if he is able to do similar then I believe he will run a nice race,” Soumillon said.

“Unfortunately (a fast pace is the key), if the pace is not strong then he is not able to finish off as well as he can, so he needs to have the horses in front setting a good pace,” Soumillon said.

“We know though that on the track he is not the most giving horse in the finish, he never wins by a big margin but with the blinkers taken off he does look to be enjoying it,” the Belgian added.

The Dennis Yip-trained gelding crossed the line eighth under his own steam in a trial on the dirt earlier this month with Soumillon aboard, and today the pair will break from gate five.

“The horse never shows much in the morning, he’s always a bit lazy but his piece of work on the grass was quite good on Thursday – he is moving well and he is in good shape,” Soumillon said.

“For me the race is very open – I think Hot King Prawn appears to be the one to beat on his best form,” he said.

Later in the day Soumillon will bid for a fourth triumph in the Group 1 Stewards’ Cup, pairing with the Caspar Fownes-trained Rise High who returns first-up following a lengthy stint on the sidelines due to injury.