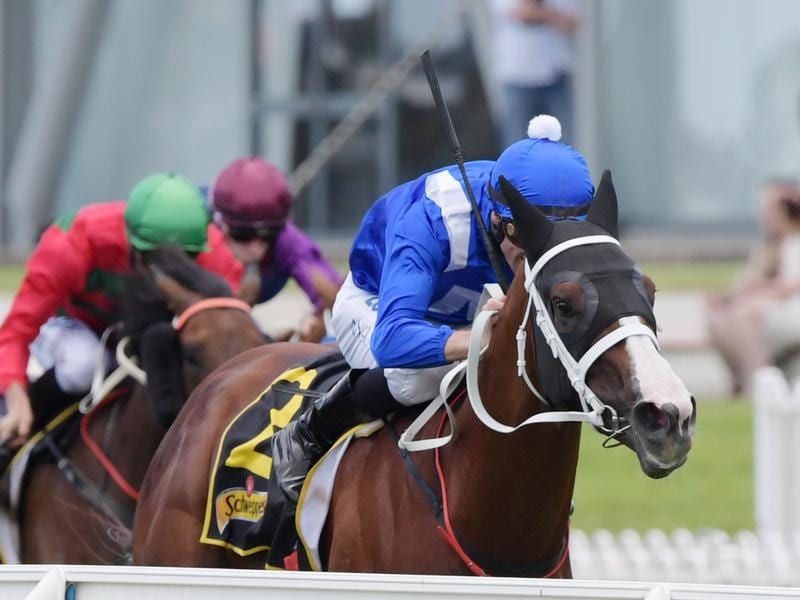 So much has been made of Chris Waller’s talented mare Sexy Eyes’ racing colours that many pundits have underestimated her strong race form.

Sexy Eyes will resume for a winter campaign in the Listed Weetwood Handicap (1200m) in Toowoomba on Saturday.

The mare won the Group Three Belle Of The Turf at Gosford on December 28 in a thrilling finish but much of the media afterwards was about her colours.

She races in blue with a white M and epaulettes, the colours of her superstar stablemate Winx.

Waller’s Queensland manager Paul Shailer said it was hardly a surprise even though owner Peter Tighe’s colours have been carried on many other top horses besides Winx.

“You can’t really blame anyone for mentioning it. After all Winx is Winx she dominates everything,” he said.

Shailer said Sexy Eyes would head north on Wednesday night and had done well since a spell.

“The Weetwood distance is a bit short of her best but it looks a nice race for her to start off in,” Shailer said.

” She has the minimum weight so as a Group Three winner she isn’t too badly off.

“Sexy Eyes has had a trial and wasn’t asked to do much.”

The possibility of a softish track at Toowoomba is no worry for Sexy Eyes who also has a win and two minor placings from three first-up runs.

Waller has taken the five-year-old mare along slowly and she has won five of her 15 starts, earning $288,000.

Sexy Eyes already has black-type from her Gosford win but Waller is keen to get more to add to her value as s broodmare.

Waller will have a strong hand in the other feature race, the Toowoomba Cup (2000m)

“We will put blinkers on The Lord Mayor. He worked well in them on Tuesday morning,” Shailer said.

The Lord Mayor is being aimed at the Brisbane Cup on June 8 with the winter paths of the other three Cup runners to be determined by their form.