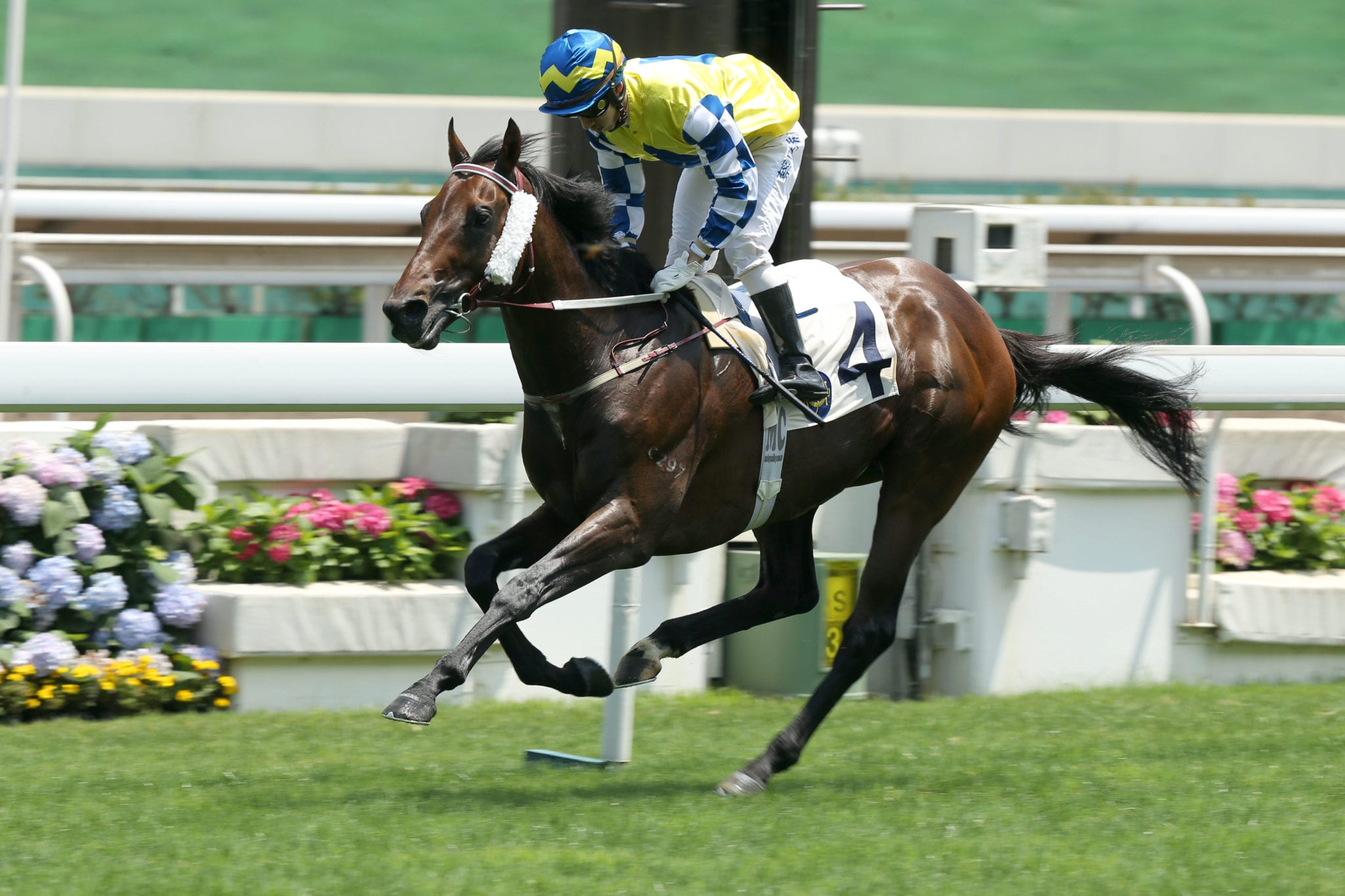 Matthew Chadwick dictated the tempo against four rivals – three of which hailed from the same record-breaking stable – and did so with full confidence in his mount’s ability to outrun the rest.

“He travelled early, got an easy time in front and he was always going to outstay them,” Chadwick said.

“I thought his run last time was the best of John’s horses and he had improvement to come, so I thought he was as good if not better than the favourite.”

Helene Leadingstar (119lb) was the market pick and the only horse not from the Moore camp. The Tony Cruz-trained galloper advanced with a wide effort on the home turn as jockey Karis Teetan attempted to press the leader, but Zac Purton on Eagle Way (133lb) had the same idea, forcing Helene Leadingstar to labour three-wide.

Chefano (114lb) was headed briefly but Chadwick regathered the South African import and the pair forged on down the home straight for a two and a quarter-length success over the pursuing Savvy Nine (115lb).

“I said he’d stay all day,” Moore said. “He’s by a sire, Silvano, who went over a mile and a half and he was off a light weight, so from that point of view I had no worries about getting the distance.

“I wasn’t sure about whether Chadwick would be able to get him to travel because he’d never been on him before and this horse can be a little lazy from the 600 (metres) on – he can start to drop the speed a bit but he got the best out of him when they took him on and the horse outstayed them.”

Chefano and co. will likely face a much stiffer task should they take on recent Group 1 FWD QEII Cup (2000m) winner Exultant later this month in the last of Hong Kong’s three 2400m races.

The five-year-old became the 110th winner this season to have scored straight off the back of time spent at Conghua, the Hong Kong Jockey Club’s racecourse training facility in the Chinese Mainland. That figure eclipsed by one the total winners from Conghua last season, with more trainers able and eager to utilise the facility this term now that they are familiar with how to manage their operations there.

Moore added to the Conghua score when he completed a treble with Champion Supreme. The four-year-old took the Class 3 Insular Handicap (2000m) under Vagner Borges and did so in a Class record time of 2m 00.37s.

The handler enjoyed a perfect start to the day with Like That’s success in the four-runner Griffin race.

Ricky Yiu became only the sixth trainer in history to reach 800 career wins in Hong Kong when the rather aptly-named Fabulous Eight collected a straightforward breakthrough success in the Class 4 Isle Of Man Handicap (1000m) under Joao Moreira.

“I’m happy to hit that number, very happy, and it helps give me a bigger margin over the others in the premiership,” Yiu said after extending seven clear of his nearest pursuer Francis Lui.

Fabulous Eight returned in March from a year on the sidelines and showed promise in two starts since, before opening his career account at the seventh attempt.

“His form gradually faded away last season because he had a small problem and it’s taken a long time – I took him to Conghua for a while and managed to get him over it. It was Class 4 today and that shouldn’t have been a problem. He can go 1200 metres,” Yiu said.

Purton closes in on Moreira again

Zac Purton charged off the blocks with victory in the first two races on the card and added one more to wrap up with a treble.

That put him only one win behind championship leader Moreira with the tallies standing at 110 to 109 in the Brazilian’s favour.

Like That started as the 4.9 outsider of four in the opening the Argonaut Plate (1000m) for Griffins, having placed fifth of six in a similar contest on debut the time before. The Moore-trained Akeed Mofeed two-year-old tracked his rivals under Purton, and, with a 9lb weigh-for-age advantage, quickened past to win by half a length.

“I’m really happy with that, he came off the bit really well,” Moore said. “He just needed the extra three weeks. He’s a miler and I said to Zac to just drop him in behind – he’s won without touching him.”

Purton and trainer David Hall combined in the Class 5 Special Cargo Handicap (1200m, dirt) with Demons Rock. The one and three-quarter-length success meant that the top-weight broke his Hong Kong maiden at the 25th attempt – the five-year-old won four times in Britain pre-import, the last being a 1200m score at York in August 2017.

The Australian was on the mark again in race seven, the Class 4 Norman Conqueror Handicap (1600m), atop the Dennis Yip-trained Decisive Action. The handler has had 18 wins this term and Purton has piloted 14 of those.

Little Thunder’s win in the Class 4 Manicou Handicap (1200m, dirt) saw Victor Wong return to the winner’s arch for the first time on a Millard runner since October 2018. The stable apprentice has bounced back from a long spell on the sideline.

Derek Leung and trainer Jimmy Ting pocketed their second win in tandem this term when Hong Kong International Sale graduate Momentum Happy kept on rolling to land a maiden win in the Class 4 Monaveen Handicap (1400m). The four-year-old was having his first start for Ting following a stable transfer and took the handler’s overall score for the season to 30 and Leung’s to 24.

The finale, the Class 3 Inch Arran Handicap (1400m), went to the Cruz-trained Beauty Spirit who was galvanized late to take the spoils under a determined Neil Callan.