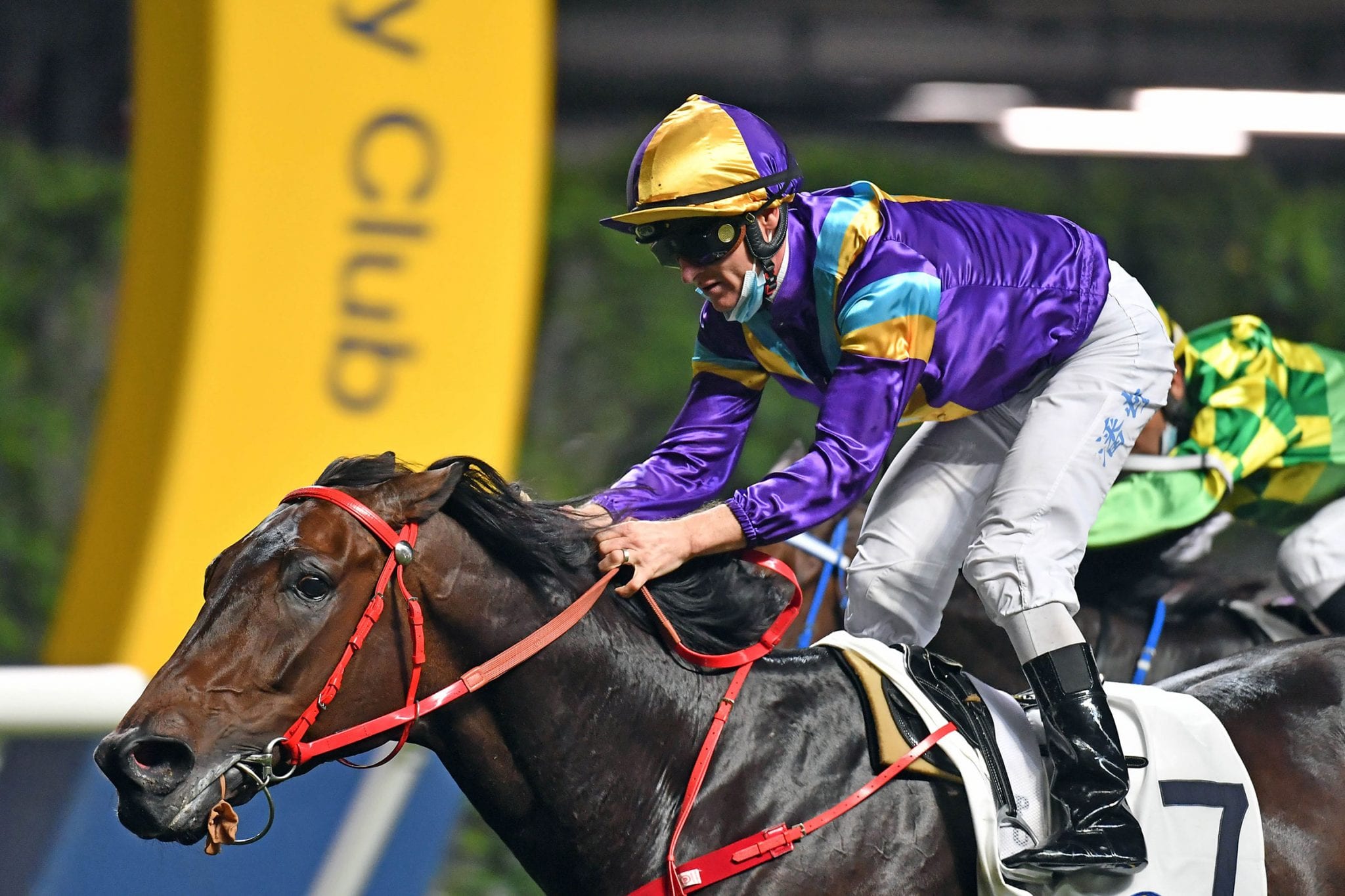 Charity Fun is now a three-time winner from five starts in Hong Kong.

Inconvenienced during the pivotal stages of what Purton described as a “messy race”, Charity Fun stamped his authority on the contest to notch his third win from five starts – while earning a High Achievement Bonus of HK$1 million in addition to the HK$1.254 million winners’ purse.

The bonus is available to horses with a minimum rating of 80 who wins a Class 2 race before turning five.

The success was the 25th shared in the 2020/21 season by Purton and Shum and the pair’s 12th victory since the start of March, preserving the hopes of both in the jockeys’ and trainers’ championships.

Purton boosted his tally to 95 with a treble, leaving the Australian 17 behind Joao Moreira, who has 112 wins for the term after a midweek double, while Shum moved into outright third in the trainers’ title after registering his 50th win for the season to trail only John Size (56) and Caspar Fownes (54).

“The pace was not perfect for him tonight but the horse has got a big heart,” Shum said.

“He can go to the Queen Mother Memorial Cup at Sha Tin in May now – he deserves his chance.

“He is racing well.”

“It was a good win, it was a messy race,” the Australian said. “The first half worked out really well, the second half was a disaster. He was still good enough to win despite that.

Shum and Purton extended a bountiful association when Young Legend triumphed in the first section of the Class 3 Cypress Handicap (1200m) after Purton combined with Paul O’Sullivan aboard Spontaneous, earlier, as the first leg of his treble.

Francis Lui is bearing down on a career-high seasonal haul after snaring a double at Happy Valley to take his 2020/21 tally to 49 as a cluster of potential challengers emerge behind Size and Fownes for the trainers’ title.

Famed for his association with Golden Sixty, Lui last season posted 63 wins and, with a momentum-building brace at the city circuit, the quietly-spoken handler is within range of his record mark after Cheerful Days ended a frustrating sequence of near-misses with a tenacious win in the Class 4 Spruce Handicap (1650m).

“He deserved to win, he’s been running a lot of places and his rating keeps on going up. He’s done a good job,” Lui said after sharing a race-to-race-double with Moreira, who was also successful aboard Lui’s Stock Legend in the second section of the Class 3 Cypress Handicap (1200m).

“There was no pace apart from one horse. Stock Legend did a good job, it’s good to get a win. The horses are running well.”

Frankie Lor and Lui share fourth place in the trainers’ championship with 49 wins.

David Hayes continued to strike with emerging talent when Showina, veteran of only two previous starts, prevailed in the first section of the Class 4 Larch Handicap (1200m) under Blake Shinn.

“He had to do some work from the outside barrier (gate 12) to establish the lead but once he got to the lead, he got some soft sectionals,” Shinn said.

“He attacked the line and he really had a sense of purpose about himself to win the race and it’s the sign of a horse who wants to be here in Hong Kong – I think he’s a horse that’s going places.”

Hayes slotted his 18th win of the season with the Showcasing gelding, revealing his only pre-race concern was a poor draw.

“I was confident before we got gate 12. I just thought, he’s had two starts now, has blinkers on so let’s make our own luck and grab the race by the scruff of the neck – it worked,” Hayes said.

“When you do those tactics, it is sink or swim. When he was leading like that, he was always going to be hard to beat.

“He is a decent horse, but if you ask me, the horse (Shenron) in the race before is a much better horse.”

Hayes’ hopes of landing the second section of the Class 4 Larch Handicap (1200m) with debutant Shenron were dashed by Paul O’Sullivan’s revitalised Spontaneous, who has excelled since returning from a bowed tendon with three wins and a second from four outings.

“I think he’ll cut it when he gets up to Class 3,” O’Sullivan said after Purton drove the Unencumbered gelding to victory. “He likes it here at Happy Valley, the ground is a bit easier.

“He’s starting to work really well on the dirt, so he might head there eventually too.”

Shenron finished eighth after getting well back in a race which was slowly run through the early sectionals.

Alex Lai savoured his third win of the 2021/21 season when Enjoyable Success stormed late to clinch the first section of the Class 5 Walnut Handicap (1800m) for Me Tsui.

Lai said: “He had a low weight (113lb) and he got a good position. He tried hard over the last 400 metres and I’m very happy with his performance.”

Vagner Borges notched his 20th win of the season when the Brazilian produced a sublime ride on Success Allstars to win the second section of the Class 5 Walnut Handicap (1800m) for South African trainer David Ferraris.