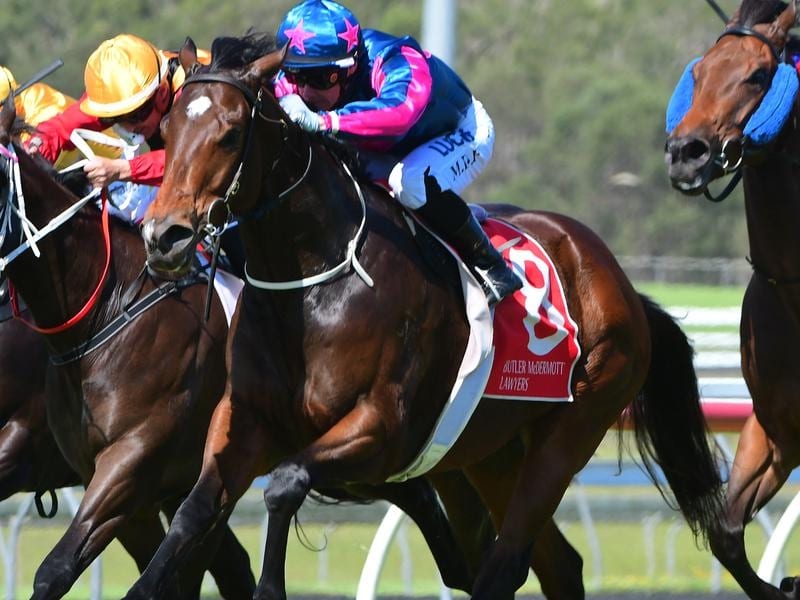 Emotions were running high for trainer Desleigh Forster after Chapter And Verse scored a last-to-first win at the Sunshine Coast.

Chapter And Verse was bred by Basil Nolan whose son Basil Jnr, 45, was killed in a tragic workplace accident last Tuesday at Gladfield, near Warwick, southeast of Brisbane.

A funeral will be held for Nolan, a father of four, at Warwick on Thursday at 11am.

Forster dedicated Saturday’s win to the Nolan family who own Raheen Stud on the Darling Downs and have been long-time stable supporters.

“I just spoke with Basil Snr on the phone and he said when Chapter And Verse hit the front in the straight Basil Jnr was pulling the whip to make sure he won,” Forster said.

“There was no way he was going to get beaten with Basil helping him home.”

Forster bought Chapter And Verse for $28,000 in 2016 at the Gold Coast March yearling sale but injuries delayed his racing career.

Summer carnival targets are in the mix for Chapter And Verse ($13) who was last entering the straight before unleashing a barnstorming finish to win by a neck.

Jockey Mark Du Plessis was rewarded with the ride after putting in many hours at trackwork in the lead-up to the gelding’s return to racing.

“I said to Mark ages ago ‘you’ll want to ride this horse’ because I really think he’s a carnival horse’,” Forster said.

“He was unlucky behind The Bostonian at Doomben during the winter when he was poleaxed.”

Forster believes Chapter And Verse will be at his best when he steps up to mile races and, like many, is eagerly awaiting the reopening of Eagle Farm.

“I don’t think his pattern of racing is really suited to Doomben and he’s one of those horses that needs ‘the Farm’ big time,” she said.

“I’ll just take him home and let him get over this run and find something for him. He’s a quality horse.”