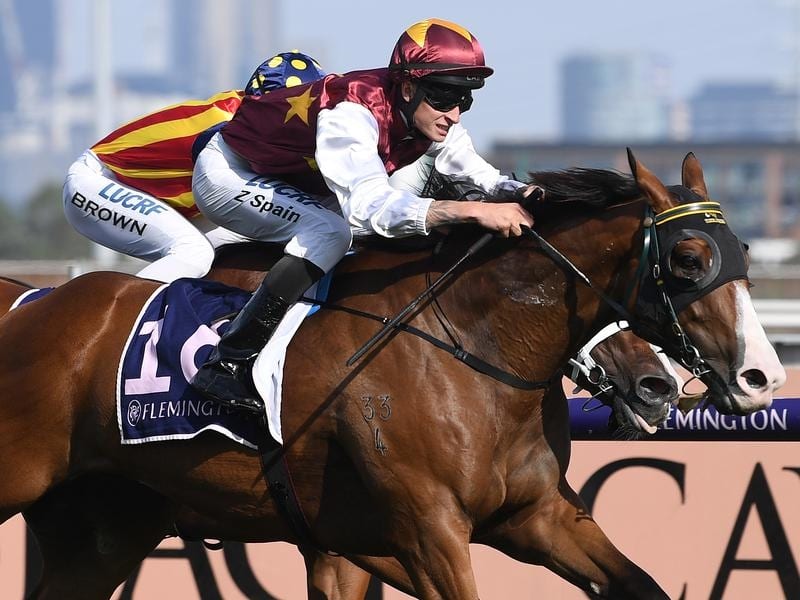 Trainer Shane Nichols is convinced Streets Of Avalon has one more run left in him before a well-earned break.

Streets Of Avalon runs for the ninth time this campaign in Saturday’s Group Three Victoria Handicap at Caulfield.

A two-time winner this campaign, Streets Of Avalon has failed to fill a place just twice this time in, including a last-start fifth over 1200m at Caulfield on April 6.

After racing on the speed, Streets Of Avalon was checked near the finish costing Nikita Beriman aboard second-placed Spirit Of Aquada a 15-meeting suspension.

“The leader probably went too hard and Michael (Poy) tried to back off from the leader but it went at too high-a-tempo,” Nichols said.

“I don’t know if he would have run one-two anyway, but Nikita bowled them over and put an end to him.”

Nichols sees Saturday’s 1400m against eight opponents as ideal, although the field could be reduced with Naantali and Dark Eyes also acceptors for races at Randwick.

“There doesn’t look to be a high tempo in it so he should be on speed,” Nichols said.

“I’m glad Manolo Blahniq has drawn inside of us, although his last run was very good from an inside gate.

“He’s third-up and primed while we’re at our ninth run in and obviously hard fit, but we’ve had a lot of racing and at some stage he’s going to run out of petrol tickets.

“Whether that’s Saturday, or after Saturday, either way he’ll go for a break regardless of how he performs.”

That break could be a brief one for a possible trip to Brisbane or extended with a view to the spring.

Concerning for Nichols is the gelding struggles to carry weight, although he reckons he is well handicapped on Saturday.

Nichols says it’s nice to reward Clayton Douglas, who rode Streets Of Avalon to his maiden success at Bairnsdale in December 2017, with a ride in a Group race.