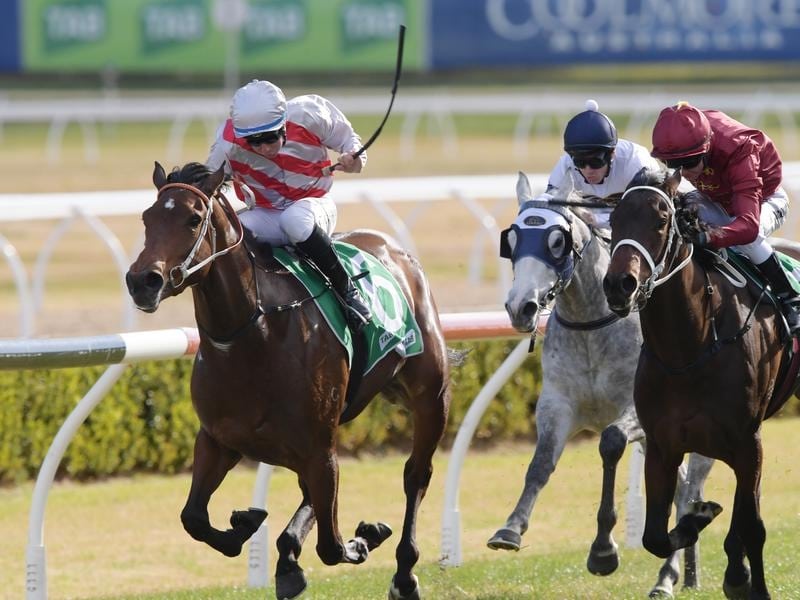 Debutante Symi has lived up to her breeding to win at Canterbury and put jockey Tommy Berry on the board after his return home from a season in Hong Kong.

A sister to 2017 Blue Diamond Stakes winner Catchy, is raced by prominent owner-breeder Alan Bell and trained by Hawkes Racing who chose to run her in the Benchmark 69 race over 1250m rather than the maiden for three-year-olds on Wednesday’s program.

Berry took the initiative on Symi ($4.20), the only previously unraced horse in the seven-horse field and she held on to beat Misteed ($8.50) by a short head with Couvre Lit ($4.60) another long head third.

Berry said he took the filly to fence to give her something to follow and the ploy worked.

“She gave me a great feel in a trial although she did a bit wrong.

“The fence aided her today in time she will be a nice horse.” Co-trainer Michael Hawkes praised Berry’s ride, saying it was the key.

“She jumped great and credit to Tommy he got her into a rhythm. She will improve and she’s on her way.

“She’s a blue blood and it’s good to see her start out this way.”

The three-year-old maiden, also over 1250m, was won by the Mark Newnham-trained Maid Of Heaven who came into the race off an unlucky fourth on debut on July 25 behind Golden Tycoon who contests Saturday’s Listed Rosebud at Rosehill.

Sent out the $2.60 favourite with Tim Clark aboard, Maid of Heaven denied Berry and the Hawkes team and earlier win when she beat Brilliant Choice ($6.50) by half a length.

“I thought her run last start was the run of the day,” Clark said.

“When she gets on to a big track over 1400 metres to a mile she will come into her own.”

Newnham said he would monitor the filly before making any plans to push on to an extended spring campaign.