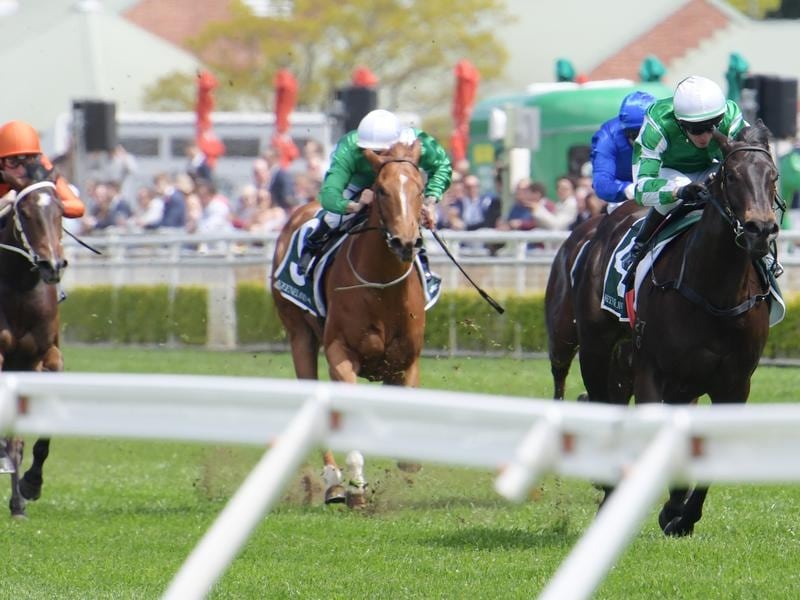 Catch Me has broken the race record in an impressive introduction to racing in the Group Three Gimcrack Stakes for two-year-old fillies at Randwick.

A $625,000 yearling from this year’s Easter Sale in Sydney, the daughter of I Am Invincible out of Captivating Claire defied a wide run in Saturday’s 1000m race to surge clear in the straight.

The time bettered the previous race record of 57.41 seconds set by Defiant Dame eight years ago.

The winner’s Peter and Paul Snowden-trained stablemate Mayaaseh ($5) was another half-length away third.

“She’s obviously a filly with good potential,” Peter Snowden said of Catch Me.

“I’ll definitely put her out now.

“I said to the owners yesterday, if she runs well I think the Blue Diamond is the perfect timing for her. So that’s what we’ll have in mind.”

Snowden was confident Catch Me would run well but was concerned about her deep barrier draw and jockey Kerrin McEvoy was forced to race wide throughout.

“I gave Kerrin the option to slot in and he tried that but was still six deep not getting much cover,” Snowden said.

“She got shunted wide on the corner and was all on her own, so that adds more merit to the win.”

McEvoy said it was a great start to Catch Me’s career.

“She’s above average that’s for sure and she’s only going to get better,” McEvoy said.

Conners said Diddles would be aimed at the Magic Millions 2YO Classic in January, a race her dam Mimi Lebrock won in 2007.