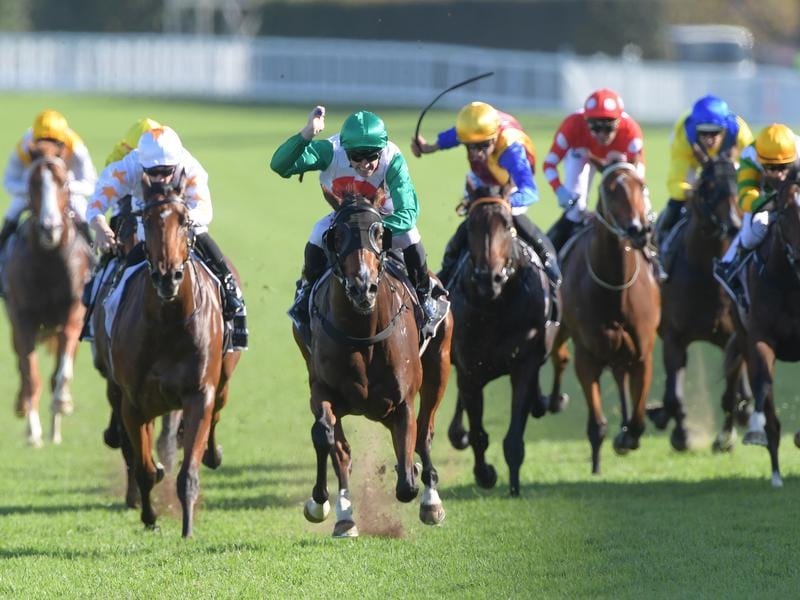 A long-range plan by Richard Litt has given the young trainer a magic moment with Castelvecchio winning the Group One Champagne Stakes at Randwick.

The colt signalled his class when he won the $2 million Inglis Millennium in February at his second start and Litt and owner Ottavio Galletta resisted the temptation to set Castelvecchio for the Golden Slipper, confident he would be at his best over further than 1200m.

Litt has a small stable of mostly tried horses inherited from other trainers with Castelvecchio a $150,000 yearling at the Classic sale.

“It’s been a great preparation in. We would have loved to have won the Sires’ but that didn’t happen and coming two weeks into this we had great confidence he would run well.

“There were no moments where we’ve ever doubted ourselves. We’ve gone straight on and done our job.

“He’ll improve out of sight as a three-year-old. He is only a small horse and has a lot of maturing to do.

His jockey Josh Parr makes no secret of his affection for Castelvecchio, who gave his sire Dundeel a first Australian Group One win.

Lady Lupino ($11) was another three-quarters of a length third after leading the field until halfway down the straight.

“The writing has been on the wall for some time that the Champagne Stakes was his mark, the 1600 metres at Randwick.

“There is still a lot there. He’s only just learning his craft now. He was able to jump into a midfield position, travel like the winner the entire way and won like a very good horse.

“The job Richie has done with this horse has been remarkable.

“He has been able to keep him up and have him peak on the day.”

Fellow jockey James McDonald said Loving Gaby was also a horse who would get better.

The Ciaron Maher and David Eustace-trained filly has run in all four Group One races for two-year-olds this season, finishing an unlucky sixth in the Blue Diamond, fourth in the Golden Slipper and second in both the Sires’ and Champagne.

“She’s come a long way in a short period of time,” McDonald said.

“It’s a real credit to the Maher and Eustace stable and also a credit to her. She’s a very good filly and she’s only going to get better from here on in.”