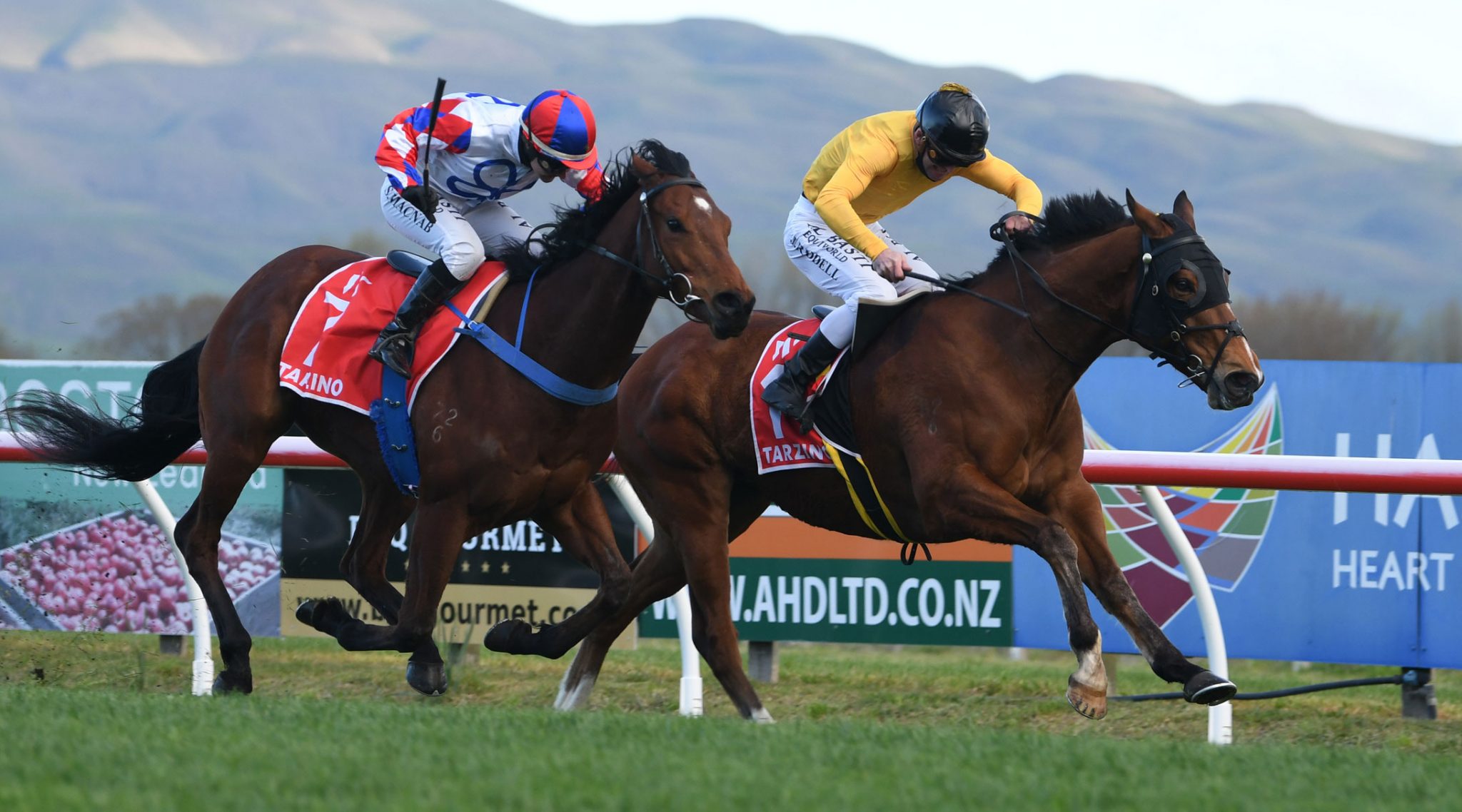 Gritty local galloper Callsign Mav had to call on all his undoubted talent as he took out his second Group 1 Tarzino Trophy (1400m) in succession, in a desperate finish to the feature event at Hastings on Saturday.

The John Bary-trained son of Atlante had upset in the race in 2020 at odds of more than +7900, but with the scratching of the pre-post favourite in Avantage on Friday, this time the punters were happy to install the strapping five-year-old as the top fancy at +230.

Rider Jonathan Riddell had no hesitation in taking Callsign Mav to the front from barrier rise, where he set up a solid speed after being taken on by several runners early in the piece.

Idling around the home bend, Riddell sent his mount for home, opening up a three-length advantage and being hailed the winner at the 250m.

No-one told last start Wanganui winner Spring Tide that was the pre-ordained result as he set out after Callsign Mav and looked certain to head him at the 50m mark, however Callsign Mav dug deep and stuck his neck out to fend off Spring Tide and claim a well-earned victory.

“He worked overtime to get there and they never made it easy for him,” said Bary, who also owns a share in the horse.

“It’s a big thank you to the owners, who let me do what I wanted to do with this horse last season and to the staff at home.

“It is a big team effort and also thanks to everyone who have put this day on.

“They never left him alone and he had to do it at both ends of the race.

“He’s a different horse now though, bigger and stronger and we got it done today.

“This is my 11th Group One, but first in the yellow colours, so that makes it pretty special.”

Bary also confirmed that the horse would be back in a fortnight to contest the Group 1 Windsor Park Plate (1600m) before continuing on a path to the Group 1 Cox Plate (2040m) at Moonee Valley next month.

“We will be here in two more weeks, for another Group One,” he said.

“Hopefully he can keep moving forward and it will be off to the Cox Plate after that.”

Riddell was taking plenty of deep breaths after giving his all on his mount during the race.

“They all made me work and I just had to keep going (to get the lead),” he said.

“In the back of my mind I thought it might be his undoing, but we got it cheap around the corner and then he really found late.

“It’s just amazing and he has matured and is now one of the big boys.”

Spring Tide tried hard to make it a memorable day for trainer Chrissy Bambry, who had earlier taken out the Group 3 Hawke’s Bay Breeders’ Gold Trail Stakes (1200m) with Bellacontte, while the connections of Masetto, Gino Severini and Dragon Leap would have all been pleased with their efforts as they finished locked together in the battle for third place, which was taken by Masetto.

Out of the Volksraad mare Raadisi, Callsign Mav has now won six of his 18 starts and over NZD$439,000 in prizemoney.