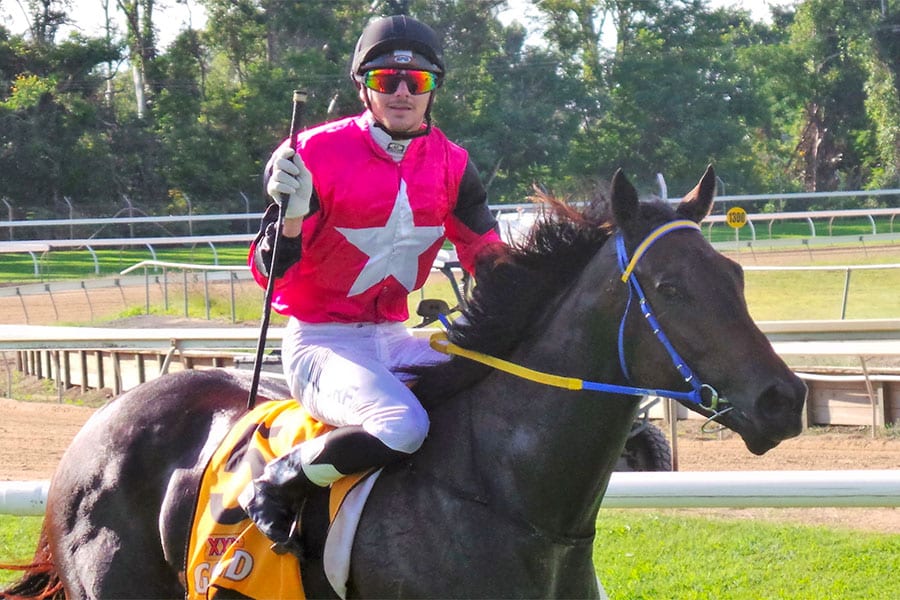 Having won a key lead-up to the Newmarket a fortnight ago, the Tattersall’s Sprint, Butler admits that the 5kg drop in weight will make a huge different in what is a quality edition of the Central Queensland feature sprint.

Drawn barrier 13, the five-year-old gelding will need to find some luck early, with Butler keeping his options open after drawing wide.
“It (the barrier) makes it hard,” Butler said.

“Obviously he’s in good form and if he had have drew a gate I would have been really confident, but it’s just where we’re gonna get from 13 is a bit hard.”

The Olivia Cairns-trained gelding has a phenomenal record at Rockhampton, with ten starts for four wins, five seconds and a third, and now looks to make it a treble of feature wins this carnival; the Rockhampton Amateur’s Bracelet, Tattersall’s Sprint and the Newmarket.

Winning with 63kg last time out, Butler hopes the 5kg weight relief could be the key to compensating the wide draw.

“The day I rode him and he ran second at Mackay, he was probably a victim of circumstances,” Butler said.

“He had a big weight, drew a bad alley, although he was able to go forward and slot in, the winner just sort of followed me everywhere I went, there was a tear-away leader and I sort of had to cart the field up to the leader – the winner just had the drop on him and I think he carrier three or four kilos less than him that day too.

While Butler will be hoping for feature race success on Friday, he is also excited to partner up with promising sprinter, Bustedup, who returns to the races after winning three from four last campaign.

“He’s had a couple of trials this time in too,” Butler said.

“I think the first trial we gave him was on a heavier track and he went really good.

“His form is really good; the only time he got beat was at Eagle Farm behind Georgie’s Pride, and I think she came out and won her next three or four and was competitive around carnival time in Brisbane too.

Being a two-day carnival, it will be a quiet Friday night for Butler, before he reunites with Battle of the Bush runner-up Bollente in the Rockhampton Cup.

“When Ray Hermann had him before I won on him at Emerald, he went from a mile at Barcaldine, I think it was a week and a half or two weeks later he went back to 1200m when I won the qualifier on him,” he said.

“I think Nick (Walsh) has just been trying to train him as a sprinter early days to try and get him to the Battle of the Bush, trying to keep a little bit of sprint in his legs.

“He’s another one in the same category as Last Chance; he carried 62kg in the Battle of the Bush and gets into a Rocky Cup with 57.5kg, like that’s a massive drop for him.

“I think the only reason he probably got beat in Brisbane was because of the 62kg, he probably felt the pinch the last bit, but I think if anything he’s probably looking for the mile at a big track.

“He’ll probably role forward, give himself every chance from the (barrier) seven.

To round out the weekend, Butler will partner Jared Wehlow’s Avocado Sunset as he looks to return in winning ways and extend his current win streak of three.

Drawn a touch awkwardly in barrier 10, the three-year-old son of Deep Field will show his customary turn of foot to cross and lead in a bid to remain unbeaten at Callaghan Park.

“He’s had no trials or jump outs this time in,” Butler said.

“He’s come back really good. He’s only a little horse, but it looks like he’s filled out and developed into a nice horse.

“He showed good ability last prep, Jared (Wehlow) took him to Murwillumbah because he’s obviously a BOBS Bonus horse, chasing the BOBS money; first-up, ran into a heavy track and I think he ran into a pretty smart one – I think the winner come out and won the Grafton Guineas yesterday (Tamilaide).

“Apart from that he’s done nothing wrong; he’s come out and won three on the trot.

“He should be hard to beat.”