Brutal Too Powerful In The Mckenzie Stakes 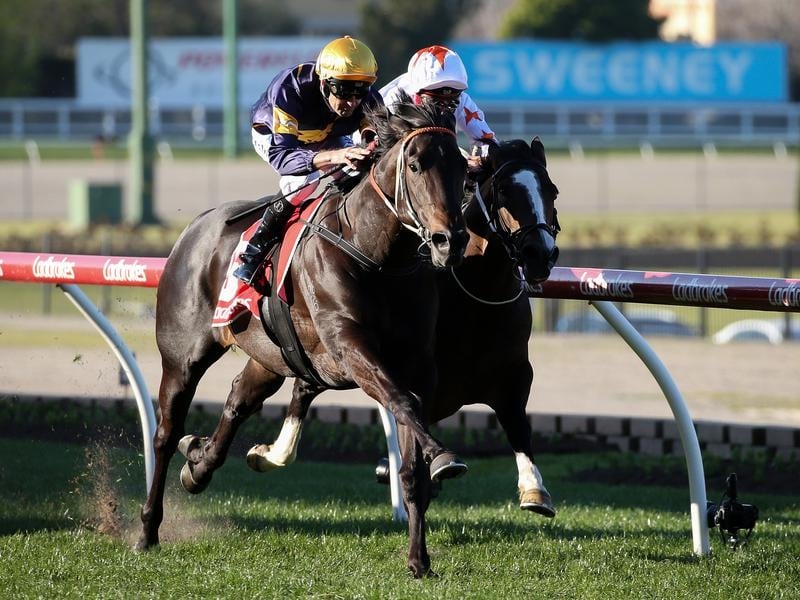 Brutal has graduated to stakes company at his second race start to claim a fighting win at Moonee Valley.

The Hawes Racing-trained colt was looked upon as one of the safest bets on Saturday’s program in the McKenzie Stakes but it took him the length of the straight to deliver.

“He had to put him to the sword today but I did like the last 50 (metres) today, the way he flattened out,” co-trainer Wayne Hawkes said.

“When they’re $1.50 everyone expects them to win by five lengths. You don’t have to win by big margins, you only have to get the job done.

“This is only his second race start and it’s all new to him.”

Hawkes said the stable would let the dust settle before deciding on whether to step Brutal up in distance or keep him to shorter course races.

“We just need to go back and look at the replay, take stock and work it out because we really had no plan after today,” Hawkes said.

“It was good that he got in behind them and relaxed and went to sleep and then fire up and dig deep.

“He hadn’t run for five weeks and we’ve got to see how much he blows now, that’s the main thing.

“In a normal race the second horse careers away and wins.”

Dunn was surprised to see the early pace with Mig Energy firing forward from a wide draw to lead after Tavisan had pinged the gates to lead early.

He said while he relaxed behind the speed Brutal didn’t travel that well around the home turn.

“But I loved the way he flattened out,” Dunn said.