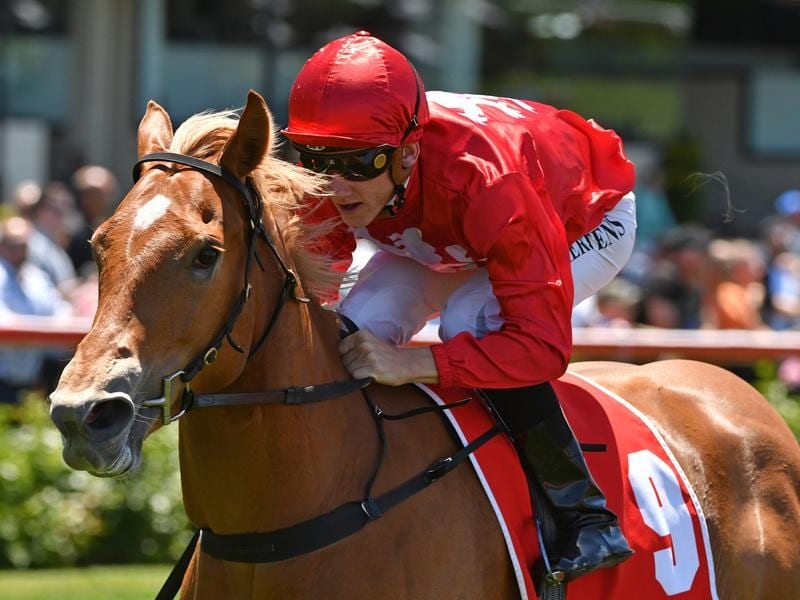 Brooklyn Hustle has spent the past three weeks at Rosemont Stud after winning her debut at Moonee Valley earlier in the month.

“She’s back with me on Monday,” Warren said.

“She had ten days in the paddock at Rosemont Stud and ten days at their water walker and we’re all happy with how she’s done.

“I’ve been getting the odd photo of either Mitho (Anthony Mithen) or Nigel Austin with the horse doing ‘selfies’ and they seem very excited.”

Brooklyn Hustle created a big impression with her win at Moonee Valley on December 1 when she came from last after a poor start.

Warren said the filly spent most of the first week at Rosemont lying down recovering from the rigours of her first racing campaign.

“It’s good that she’s gone down there and chilled out, cleared her head,” Warren said.

Warren is excited at the prospect of training the early Blue Diamond favourite who is likely to have her return run in the fillies division of the Blue Diamond Prelude at Caulfield on February 9, two weeks before the Group One Blue Diamond Stakes.

“We’ve already had our Christmas present at Moonee Valley seeing how good she is. Times don’t lie,” Warren said.

“So it’s nice having another horse getting ready for a Group One.

“We’ve got a number of exciting horses in the stable but in the short term she’s favourite for the Blue Diamond, so it’s pretty exciting.

“She’ll have a jump-out around ten days out from the Blue Diamond Prelude and go into the Diamond after that.

“She won’t be wound right up first-up and I’ll use the Prelude to clean her up for the Diamond.”