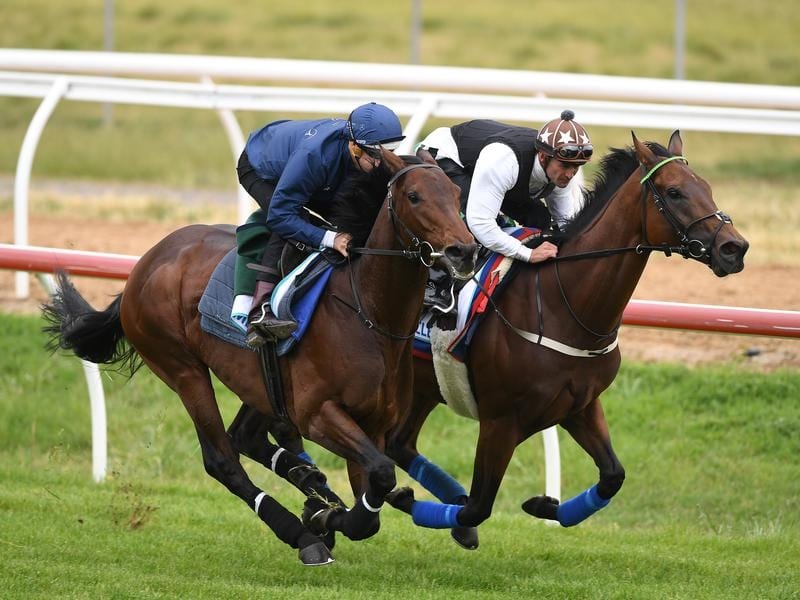 Jockeys Hugh Bowman and Corey Brown have teamed up again to put their respective Melbourne Cup mounts through a gallop at Werribee.

With Brown leading off aboard Magic Circle in the gallop over 1200m, the Bowman-ridden Marmelo joined his galloping companion at the 600m.

It’s the second time Bowman and Brown have galloped the two horses at Werribee after last week undertaking a similar piece of work.

Bowman said Marmelo, who started equal favourite when ninth to Rekindling in last year’s Melbourne Cup, was ticking over nicely.

“I just wanted to sit on him, get a feel of him again for my own comfort,” Bowman said.

“After I rode him here last Wednesday, I thought it was only fair that I went and rode Finche in the Geelong Cup before making a decision.

“I think I would probably have chosen Marmelo even if they both had enough weight.

“His work this morning confirmed it and Finche will stay here now with Chris Waller and be a horse to follow in the next year or so, but Marmelo is a mature horse and to the eye, looks healthy and happy.”

Shooting for a third Melbourne Cup victory, Brown was happier with Magic Circle’s work after partnering the second favourite a week ago.

“The other morning he was very flat-footed getting around the turn,” Brown said.

“This morning he was a lot brighter, more up underneath me on the bridle and I was happy with the way he worked.”

Brown says Magic Circle is the right type to give him a third win having won previously with Shocking (2009) and Rekindling last year.

The one query Brown has is the weight.

“He’s a tough, tradesman like stayer and I’m happy to be on him,” he said.