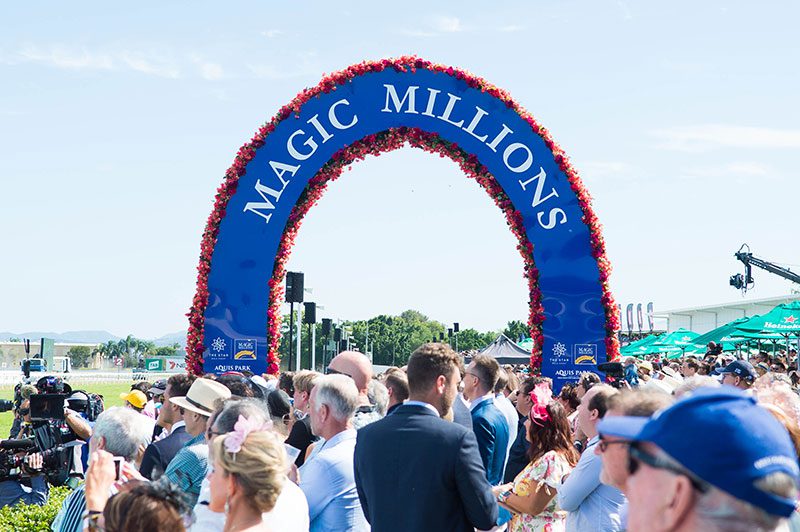 Online bookmakers have released markets for a further six races for the Gold Coast Magic Millions race day on January 15, after nominations were released on Tuesday afternoon.

All markets are All-In markets, meaning should your selection not make the final field on Saturday week, you will be ineligible for a refund.

As expected, some high-quality gallopers have been nominated for the meeting, with the Magic Millions Snippets (1200m) the highlight of the day outside of the two $2 million races.

Topping the market for the Snippets is Tony Gollan’s mare, Isotope ($3.50), along with 2020 Magic Millions 2YO Classic winner Away Game ($4) and South Australian visitor Beau Rossa ($6).

Having won the 3YO Guineas in 2020 and the Magic Millions Cup in 2021, Eleven Eleven will be looking to add the Snippets to his resume, with TAB listing the five-year-old as a $15 chance in that race, while he is an $8 chance to go back-to-back in the Cup.

The current favourite for the Magic Millions Cup (1400m) is last weekend’s wildcard winner, Kementari ($3.50), ahead of the reigning champion and Apache Chase ($8), while Chris Waller’s mares, Kiku and Brookspire, are rated $11 and $15 respectively.

Those two mares sit towards the top of the market for the $1 million Magic Millions Fillies and Mares (1300m) at $6 apiece, alongside their fellow stablemate, Nudge.

Last year’s winner, Krone, is the $5 favourite in her quest to go back-to-back for Tony Gollan, after she was a surprise $41 winner in 2021 when she defeated the well-supported Athiri and Snapdancer.

A thrilling finish in the TAB @mmsnippets as Krone gets up over Athiri right on the line! Another winner for @tonygollan with a gun ride from @RMaloney_Jockey pic.twitter.com/zmeCa4TvLQ

The Ciaron Maher & David Eustace-trained Snapdancer joins her stablemate Away Game on the third line of betting at $8, rounding out the six mares in single figures.

Tony Gollan’s Miami Fleiss has been nominated for multiple races, with the four-year-old mare rated an $11 chance in the Fillies and Mares race, while she is also the $4.50 second elect in the Magic Millions QTIS (1300m), just behind race favourite Apache Chase ($3).

Ef Troop and Wisdom Of Water are both $8 chances, after the latter returned to the winner’s circle in last month’s Magic Millions Wyong 3&4YO Stakes.

Desleigh Forster’s Georgie’s Pride ($10) and last year’s winner, The Odyssey ($10), share the fourth line of betting, before six horses sit on $15, including Boomnova, Dr Why Not and the undefeated Indiscreetly.

Pin-up QLD boy The Odyssey holds them off in a photo to round out a fantastic day at @GCTurfClub with a peach from @smthornton99 for @schweidaracing in @mmsnippets QTIS Open Handicap pic.twitter.com/qAnERpG81W

In the Open, Starelle is a $5 favourite in her quest to repeat what her stablemate Paradee did in 2021, with Chris Waller’s Bigboyroy and Wheelhouse on her heels at $6, while Love Tap ($7) and Reloaded ($8) round out those in single figures.

The Magic Millions Subzero also has Starelle at the top of the betting as a $4 favourite, ahead of Sydney visitor Parry Sound and local stayer Wapiti, who are both $4.50 chances with TAB.

Just three Queensland-trained gallopers are set to take their place, with the Gold Coast trainer Les Kelly saddling up Sokudo ($26) and Mackay trainer John Manzelmann daring to dream with Lady Snitch, who is the $101 outsider.

Magic Millions 2YO & 3YO Betting Markets

There has been very little change in each of the $2 million features, with Coolangatta a dominant $1.70 favourite for the 2YO Classic, ahead of the unbeated Russian Conquest ($7) and the Magic Millions Wyong 2YO Classic winner Soaring Ambition ($11).

In the 3YO Guineas, Robert and Luke Price’s Jamaea ($6) holds favouritism after an eye-catching trial on Tuesday, with King Of Sparta ($7), I Am Lethal ($8), Indiscreetly ($8) and Shihonka ($9) the four other runners in single figures.

The only other race on the nine-race card is the Magic Millions Maiden Plate (1200m), however markets have not been released for that race yet.