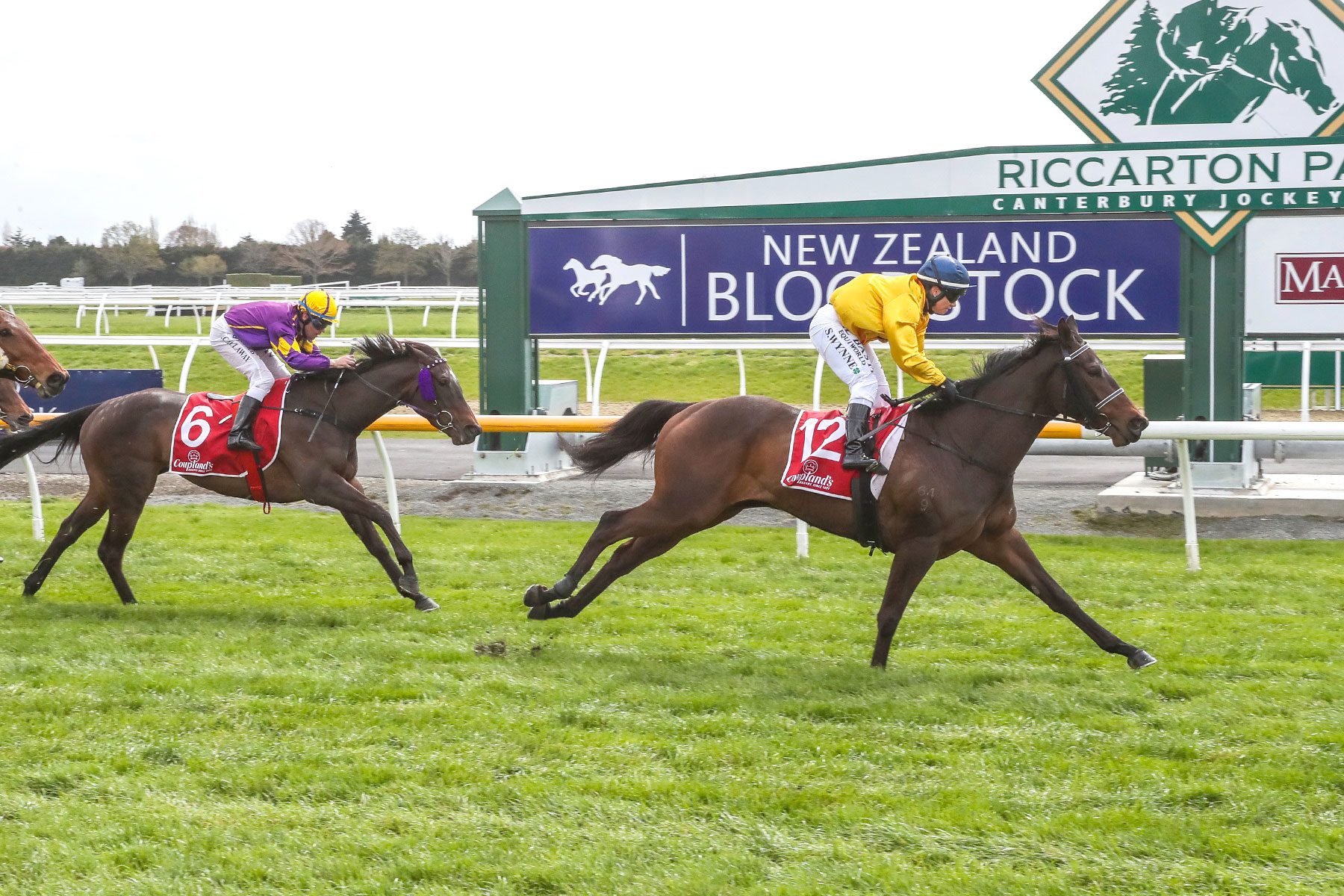 Promising filly Blue Solitaire showed she could be a strong local contender for the Group 1 Barneswood Farm New Zealand 1000 Guineas (1600m) at Riccarton next month with a stylish maiden victory at the venue on Saturday.

The Shane Kennedy and Anna Furlong-trained daughter of Almanzor relished a drop in company and a step up to 1400m in the opening race on the Riccarton programme after finishing off strongly behind the placegetters first up in the Listed Canterbury Belle Stakes (1200m) last month.

Settled against the rail in midfield by rider Sam Wynne, Blue Solitaire angled to the middle of the track at the top of the straight as she commenced a run at the leaders.

Given a shake up at the 300m the filly dashed to the front before drawing away to win by just under two lengths at the post.

Kennedy was pleased with the improvement the filly had made since her first up performance and warned there was still plenty more to come.

“Like a number of our three-year-old fillies she has been a little behind through the spring and is only now starting to make up for that,” he said.

“We were pleased with how she went first up and with the improvement she has made I thought she was a good chance today.

“That move to 1400m also suited as she just has ground written all over her and with the attitude she has I think she could even get up to a middle distance later in this campaign.

“She just has a great temperament and you can put her to sleep in her races which is what you want as they start to get over more ground.”

Kennedy confirmed that the 1000 Guineas is on the radar for Blue Solitaire pending her performance in the Group 3 War Decree Stakes (1600m) at Riccarton on October 22, a race that is also on the programme for stablemate Kikimora who was narrowly beaten into second one race later.

“We think Blue Solitaire is going to be better on a decent track so we’ll give her a shot at the Group Three mile here in a couple of weeks,” he said.

“If she goes well in that then we will press on to the 1000 Guineas with her.

“Kikimora will also go there as well with the blinkers applied and she will be on trial for the 1000 Guineas as well.”

The win caught the eye of Bookmakers who have moved her in from +7000 to +4000 in the Fixed Odds market for the 1000 Guineas where the John Bary-trained Best Seller sits as the +400 favourite.

Bred and raced by Kevin Hickman, Blue Solitaire is a daughter of Savabeel mare Princess Sapphire and comes from an extended family that includes stakes winners Sapphire Belle, Merion and Mackenzie Lad along with four-time Group One winner Alibhai.

The stable’s top seed for the 1000 Guineas, +900 prospect Perfectly Suited, was to have contested the Inglewood Stud Guineas Trial (1400m) at Riccarton on Saturday but was a scratching due to a foot issue.

“She pulled up a little bit off on Thursday morning and had a bit of an abscess come up in her foot,” Kennedy said.

“Anna was working frantically trying to get her there today but she just wasn’t quite right this morning and will wait for another day.”