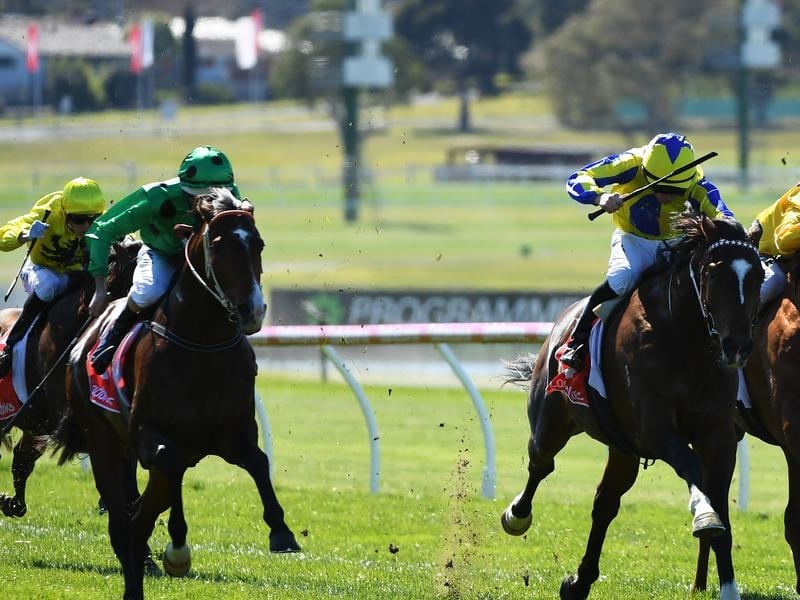 Prince Of Caviar has been beaten for a second time in as many starts but he hasn’t let those down that know him best.

The second foal of the unbeaten champion Black Caviar, Prince Of Caviar, under Luke Nolen, was defeated a neck by Extra Brut in the Vale Martin Riley Plate (1300m) at Sandown on Wednesday.

Both co-trainer Wayne Hawkes and jockey Luke Nolen said it was an improvement on the colt’s debut fourth at Sandown in May.

“I thought he was really good,” Hawkes said.

“He’ still very green and didn’t know how to flatten out, but I was more than happy with him.

“Sure we all wanted him to win but we’re not throwing the toys out of the cot.”

Hawkes said the stable would assess how the three-year-old recovers from Wednesday’s outing before deciding his next assignment and over what distance.

“I have to train him, I can’t train his pedigree,” Hawkes said.

Nolen said Prince Of Caviar enjoyed a good run through the race and was presented to win in the straight.

He said he allowed Prince Of Caviar to balance running down the dip early in straight describing the Sandown run home as daunting.

And Nolen still believes Prince Of Caviar will one day pick up black type.

“He’s got to improve to get to the levels we hope he can get to but I think when the penny drops you’ll see a better horse.

“He’s got some physical and some mental improvement still to come and when he irons these things out he’ll become a progressive horse.”

Prince Of Caviar’s older half-sister, Oscietra, trained by David and Ben Hayes and Tom Dabernig, was retired earlier this year after winning two of her five starts.