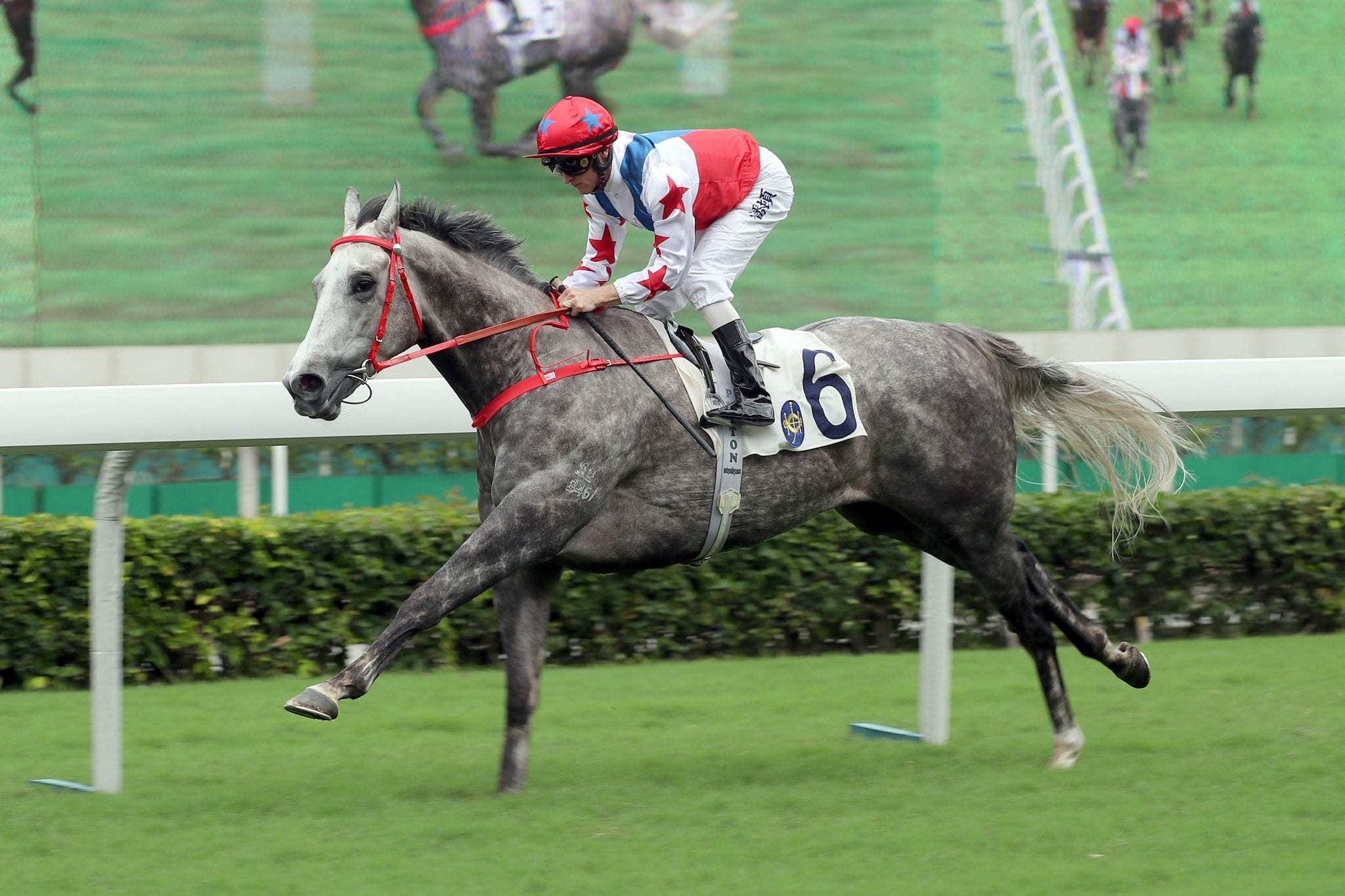 Champion jockey Zac Purton took his season’s tally to 123 wins with a masterful four-timer at Sha Tin this afternoon, Saturday, 18 May, despite feeling under the weather.

“That’s a nice day,” the Australian said. “I’ve got a bit of a cold so I’m not feeling well; it’s a hot day – it’s hard. The winners help and all the horses have run well today.”

Trainer Frankie Lor’s galloper began his career with two wins before lameness in his near-fore led to withdrawal from an intended start back in February. A three-month absence ensued and then a dull fifth to Mr Croissant, but this afternoon Big Party had connections celebrating again.

“He did everything right today, he stood in the gates really well, he began really well and he put himself in a nice spot without having to ask him to be there,” Purton said.

The grey broke smartly from gate seven, tracked the lead in second, cruised to the front with 300m to go and lengthened to a three-length score. Debutant Highland Fortune (121lb) posted a smart second, with two-time winner Mr Croissant (118lb) only third this time.

“Once we got into the corner he relaxed and then in the straight he knows what his job is, he grabbed the bit and came up when he was ready,” Purton continued.

Big Party has a potentially bright future but the champion jockey – up top for the first time today – was cautious about making big statements, given the gelding’s past issues.

“He lengthened nicely but his action feels a bit stiff from the fast ground – it’s probably not ideal for him. He’s a horse with a history of problems so we’ll have to wait and see,” he said.

“I think he just needs a bit of time to develop fully and get over his issues and once he does he has the potential to be a handy horse.”

“He had some re-shoeing before and maybe that’s why he was just a little bit uncomfortable in the race,” he explained.

“We’ll see how he is after this race and then we’ll know where we are for future plans.”

Lor and Purton had already hit the mark with Marvelous World. The three-year-old took the Class 4 Unleashing Potential Handicap (1000m) in a class record 55.28s, with a stiff tail-wind.

Uncle Steve rounded off the Purton quartet in the ninth contest in the Class 3 Age-Friendly City Handicap (1600m).

By that time the rider was feeling the effects of a strenuous day in the saddle, riding with equal measures of determined drive and brilliant judgement. All while the mercury hung out around the 30 degrees Celcius mark.

“It’s been good, capping off with what looks like another progressive horse,” the Australian said.

Purton allowed the John Moore-trained four-year-old to find his feet back in the field of 13 and the gelding responded with a race-winning run down the home straight.

“He’s just starting to learn what it’s about. He’s a stayer that needed to start to learn to relax to give himself a chance,” he said.

Moore praised Purton’s skill: “That was a gun ride. We had to take him back because it was his first time over a mile and I wasn’t sure that being ridden up close from the gate would be ideal. European horses usually need to be given a chance to learn and relax and they’ll just go through the gears.

“He’s a work in progress. He still has to learn how to race and there’s more to come.”