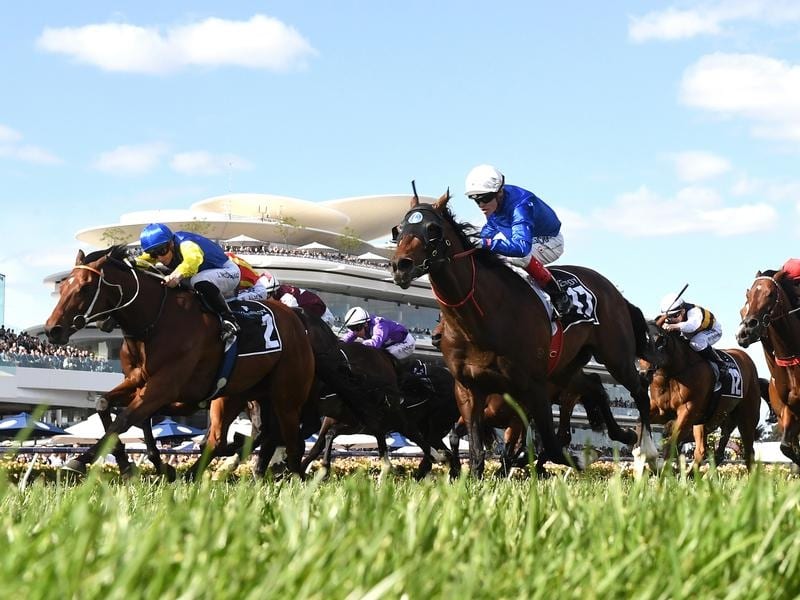 A Group One win to import Best Of Days in the Kennedy Mile has capped a memorable day for trainer James Cummings and the Godolphin operation on the big stage at Flemington.

Best Of Days surged late to win Saturday’s 1600m race, bringing up a winning treble for Godolphin on the Victoria Derby program which is considered by many to be the best day of racing on the Australian calendar.

Best Of Days is in his first preparation in Australia and the five-year-old entire capped it with his first elite-level win.

The horse only snuck into the field as an emergency and Cummings opted to apply blinkers to him for the drop back in distance after dead-heating for first in the Coongy Cup (2000m) last start.

Best Of Days enjoyed a cosy run midfield on the inside and jockey Craig Williams bided his time early in the straight.

The 2016 winner Le Romain burst to the front under 57.5kg at the 200m but Best Of Days, with 5.5kg less, got clear on his inside and charged to beat him by a half-length with the same margin to Peaceful State third.

“The horse had just been low flying all preparation but there’s no doubt this week is the best week he’s had,” Cummings said.

“I just love the program that he had for this race.

“He snuck into the field. He was a little out of the handicap but I think the form that he was in, he was ready to really deliver on the big stage.”

Best Of Days was his seventh Group One win for Godolphin.

“I’ve got a great opportunity working with a great bunch of people that can support me with a big team and we’ve got horses everywhere,” Cummings said.

“It’s taken me a bit of time and I’m just playing the right people in the right positions now and I’m really confident about that and I think we’re getting the results.

“I’m a 30-year-old trainer, a battler doing my best, but I’ve got a great opportunity here and that comes down to the wonderful team.

“You get these big days and it’s very satisfying.”

Trainer Kris Lees admitted he thought Le Romain looked the winner with 200m to go but was always going to be vulnerable late to a lighter-weighted horse.

“He ran super (for fourth) in the Everest and three weeks later he’s here just getting beaten in a mile race.”