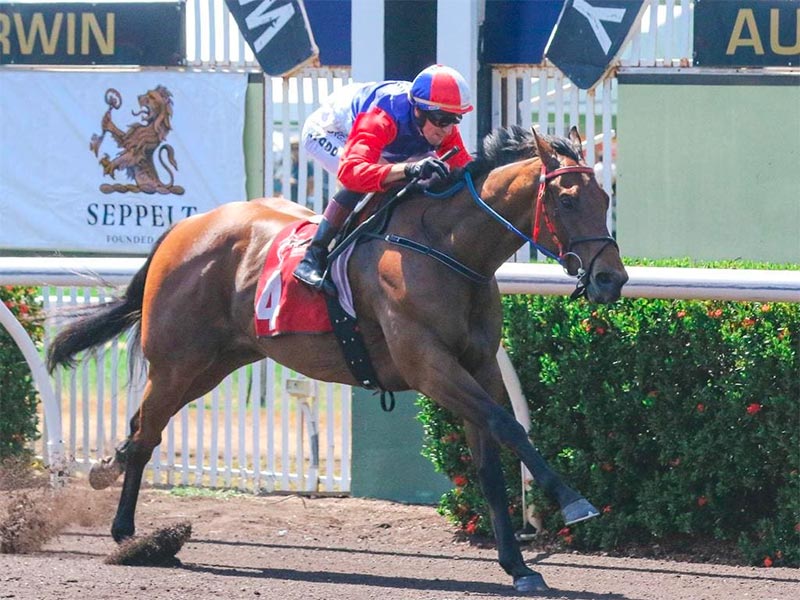 It may have been a field of only three in the Montgomerie Lightning Plate, but Gary Clarke’s Belmont Day produced a brilliant display in the fourth race on Darwin Cup Day in the Northern Territory, Australia.

Sent around as a $1.50 favourite, the five-year-old gelding led all of the way to win the 1000m sprint by 7.5 lengths as he notched his fifth win in six starts.

Jarrod Todd partnered the son of I Am Invincible from the middle alley and made an early decision to show his two rivals a clean pair of heels.

The slick 56.11s time for Belmont Day was not only visually impressive but also very good on the clock, as he finished just four one-hundredths of a second off I’m Too Hot’s course record that was set in this race in 2019.

Clarke also trained I’m Too Hot, but that gelding only managed two wins for the top Darwin gaffer.

Belmont Day was too good for Sebrakate and Star Of Monsoon, two horses who also started their racing careers in the eastern states before being transferred to the Northern Territory.

Sebrakate was a Flemington winner when in the Hayes & Dabernig stable, while third-placegetter Star Of Monsoon won well at Rosehill in 2018 when trained by Gerald Ryan.

The success for Clarke and Todd continued throughout the afternoon on Monday as the pair combined for consecutive victories in races three, four and five.

Prior to the first race on Darwin Cup Day, Clarke had trained nine winners from his past 44 starts at an impressive 20%, kicking off the new season in style after winning the Darwin Trainers Premiership.