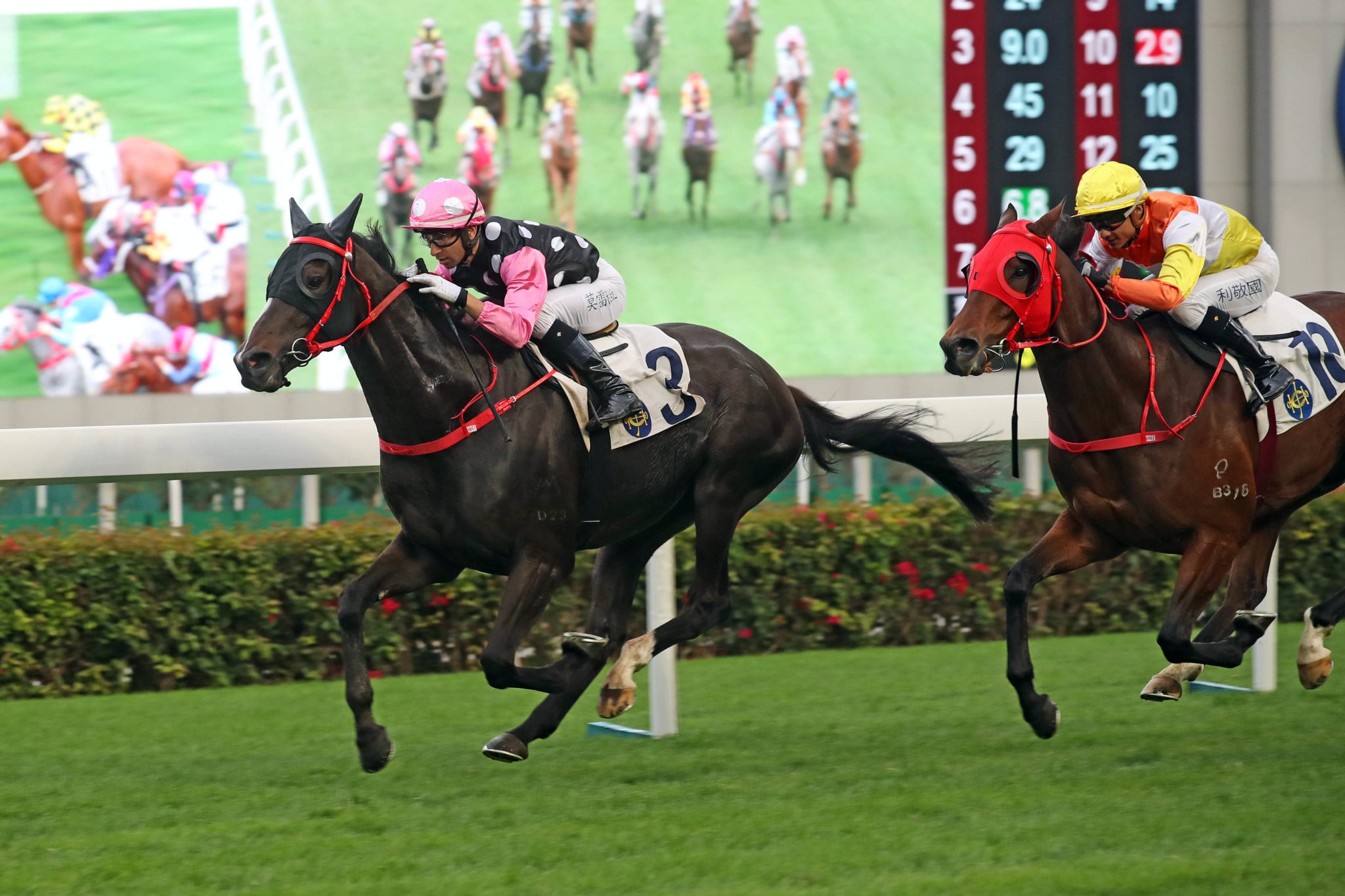 “He’s got the rating so he’s not looking for figures, we’ve just got to sort out his racing,” Size said. “We’ll go to a mile next start and keep him in the Classic Series – we’ll go in the series and trial him in between, try to contain his energy and hope we have similar luck again.”

Size, Hong Kong’s 11-time champion trainer, admitted to some reservations about the gelding, known as Hawkshot in his homeland, with regard to how he might handle his first race day test.

“The truth is I’m quite relieved with the performance because I was quite concerned before I even took the horse, I knew he’d have some management issues on race day. So far, so good!” he said.

Joao Moreira sought and found cover from gate 12, smothered the talented import in a cosy berth towards the rear, and gambled on a rail run for home that paid off handsomely.

“John Size told me to ride him as I did; jump out and try to switch him off because he is a bit temperamental,” the Brazilian said. “We wanted to make sure he kept all of his energy together and used it at the right part of the race, which is what happened – he got behind, he got relaxed and when I started to squeeze him to go forward and try to go for gaps he showed his class. He didn’t hesitate; he went past, got the split on the inside and won impressively.”

Moreira was clearly taken with Beauty Legacy’s ability but was not getting too carried away with Classic Series talk.

“He is one of a kind,” he said, “he’s got presence, he’s got temperament, he’s got scope and he’s got ability as well. Horses that get back first time out in such a strong class of race and do what he’s just done, they must have class and I think he’s one of them.

“He feels like he’s promising. It’s hard to say he is the one (to win the Derby) right now because there are a lot of horses untouched, but as time goes by we’ll see them all and there’s no doubt he’s one of those that is shining at the moment.”

Size, too, was suitably taken with Beauty Legacy’s performance shouldering 129lb, but he knows his charge will have to learn from his experience and repeat the performance if he is to make his mark on the three-race Classic Series.

“He was actually able to come through that first test quite well. The horses that start in Hong Kong rated above 90, very few of them win their first start, so you can’t be anything but complimentary towards the performance of the horse,” he said.

“Today, everything went perfectly. Whether that happens in the future is another matter, but he did draw a bad gate today; he showed he can give away a start and win, so we learned something. He was a little bit anxious today, first start at Sha Tin, so when he comes back next start for his second run, you’ll know then whether he’s going to be manageable or not – he’s going to be worse or better.

“After I watched his races in Australia I thought he was going to take some managing so we’d have to contain that energy so he uses it in the correct manner,’ Size continued.

“He’s got some management issues in his racing manner so we have to iron those out more or less immediately.”

Moreira left the track with a treble, having hit the board earlier when Supreme Witness also overcame draw 12 to win the Class 5 Sun Wui Handicap (1400m). The Brazilian took the Tony Cruz-trained gelding forward to post handily in the run before kicking for home and holding on by a neck.

And Moreira saw off a clutch of Classic Series aspirants when driving Chefano to an overdue first Hong Kong win in the Class 2 Caroline Hill Handicap (1800m). The John Moore-trained five-year-old had placed second in his three previous starts.