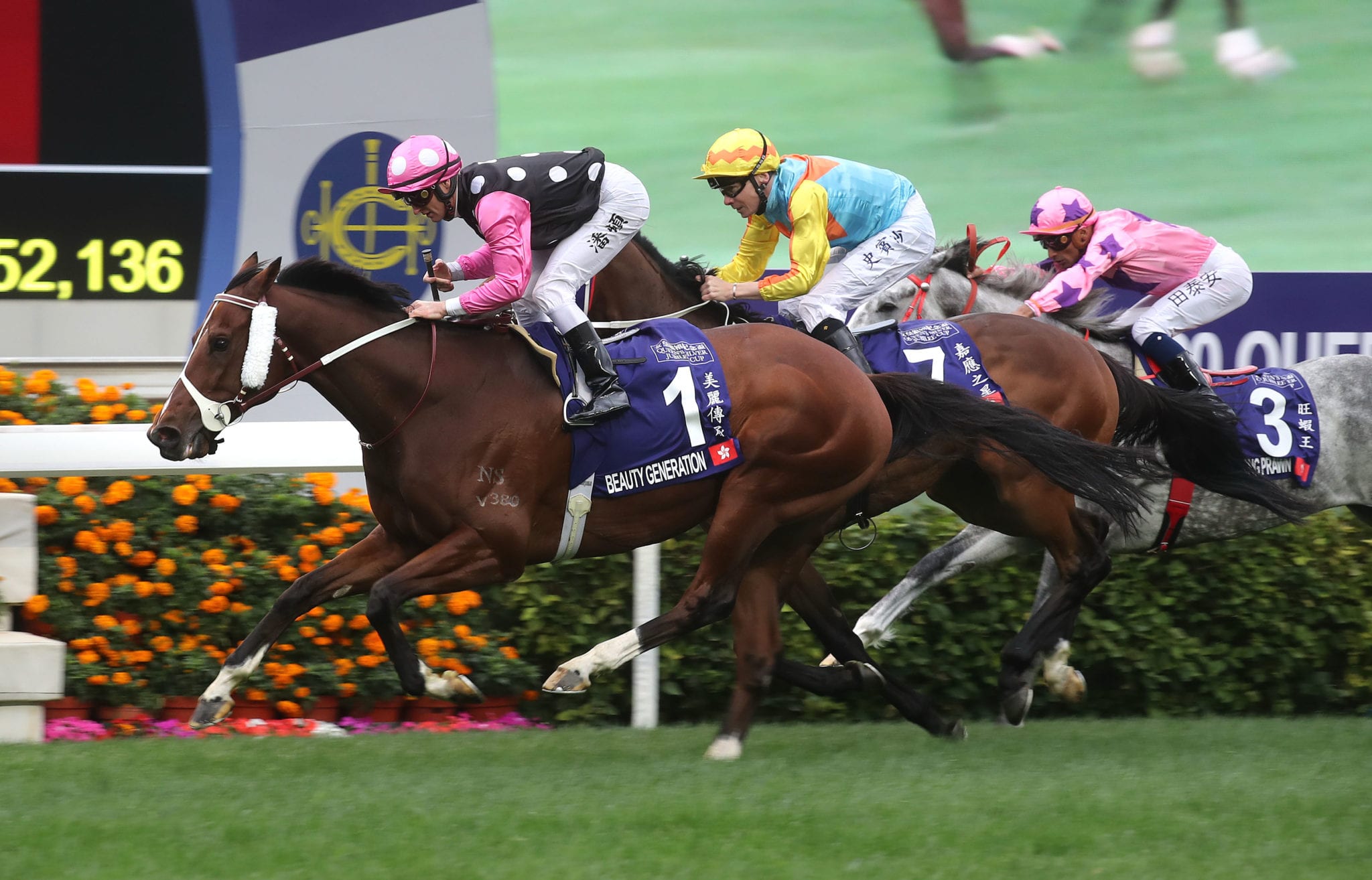 A different approach brought a familiar result as Beauty Generation returned to the winner’s arch with a tough victory in the Group 1 Queen’s Silver Jubilee Cup at Sha Tin yesterday afternoon (Sunday, 16 February).

Trainer John Moore’s “tweaks” saw Hong Kong’s champion battle to a history-making third victory in the 1400m feature in as many years and put behind him four successive defeats.

“The defeats have been disappointing but they hadn’t been by any great margin,” Moore said after collecting the trophy for the fourth time in a row and eleventh time in his career.

“I said to the staff that we just had to try a few things a little bit different, just to tweak his mind and get him thinking that he can win races. We managed to do that by taking off the blinkers, putting on the side winkers and the bit-lifter.

“I jumped him out of the gate on Thursday morning,” he continued. “I did a lot of things with him trying to not stick to the same pattern as we’d had in the lead-up to the big races in the past. It was quite a different prep.”

Beauty Generation’s astute partner Zac Purton had hoped to lead the seven-runner affair but that plan was scotched when Hot King Prawn outpaced him and claimed the vanguard under Karis Teetan.

Purton opted instead to settle the seven-year-old in fourth, biding his time until the champ rolled up strongly at the turn into the straight. The Australian shook the reins and Beauty Generation drew level with the leader at the 300m point, and from there he ground out the win.

Hot King Prawn faded to third as Beauty Generation held off Ka Ying Star by half a length in a time of 1m 21.64s.

“It probably didn’t go to script really – we thought we might be able to lead this race but Hot King Prawn, as we know, can lead 1000-metre races and had too much speed for us early. I couldn’t take the position so I had to ride him where I was and had belief in the horse,” Purton said.

“The stable said they thought they had him back to where we need him to be and as always John was right.”

But while Beauty Generation proved that he still has what it takes to be a force at the highest level, the manner of victory – albeit into a headwind – lacked the imperious power of the peak performances that saw the Patrick Kwok-owned bay stand out as the world’s best miler.
“I don’t think we’re going to see him as good as he was last season but he’s very close to that and that’s good enough to win some races,” Purton said.

“He got to the front and I thought he was going to cruise away and win easily, but being a little bit older and knowing what the game is about these days he just floated a little bit when he was in front. He’s lost that real aggression, just to put them away and kill them – he’s happy to win now, but he doesn’t need to win as far as he was before, in his mind.”

Moore is looking to Meydan now and the Group 1 Dubai Turf (1800m) at the end of March, but that possible assignment is still at the discussion stage.

“I’ve just got to put it to Patrick and I hope he’ll give me the green light because I think he’ll be very competitive; I think he could do a great job in Dubai over 1800 metres,” Moore said.

The win was a welcome one for Purton, being his first Group 1 win this season after plenty of close attempts.

“I’ve run second and third in every other Group 1 this season, so I haven’t been far away. The horses are a little bit older than they were last season and that doesn’t make it easy because you’ve got the young horses coming through,” he said.

“He had a good run round; they went soft fractions and if I had my time again I’d hoof him in the belly a bit earlier,” the rider said.

The disappointment of the race was champion sprinter Beat The Clock. John Size’s charge placed runner-up in the past two editions of this race but lost his record of having never finished out of the first three in his career with a below-par fifth, beaten three and three quarter lengths.

“Today he wasn’t able to bring his best,” jockey Joao Moreira said. “This is the very first time I’ve had to talk about his non-performance.

“He didn’t break as well as usual, he was in a position where I wouldn’t like to see him and when I pulled him out in the straight he just didn’t quicken as he would have done in the past. It was disappointing but I still love this horse, he has a place in my heart and let’s look for the next one – 1400 metres is stretching him to his limit.”

The day’s other feature, the Group 1 Citi Hong Kong Gold Cup (2000m), went to the Cruz-trained Time Warp under Moreira.