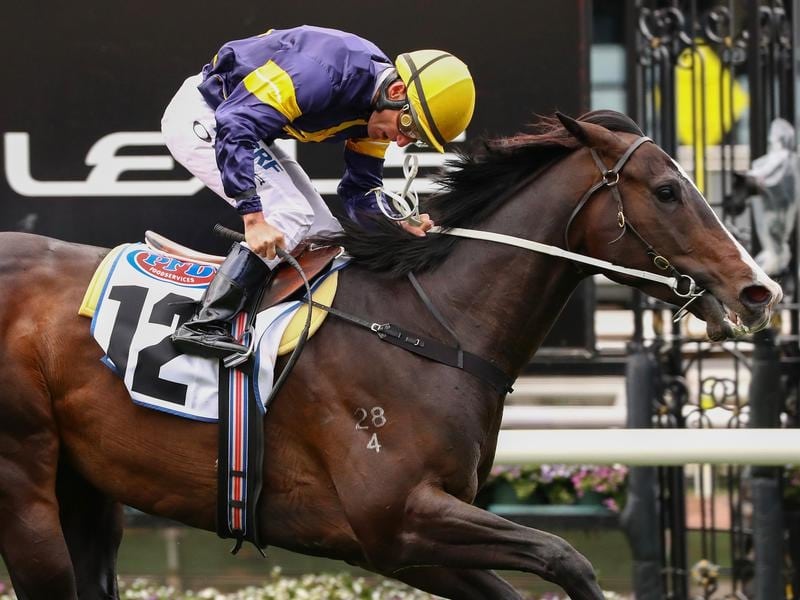 Trainer Mick Price is delighted with the progress Grunt has made as he chases consecutive Group One wins.

But he has a nagging doubt how Grunt will fare from the outside draw in Sunday’s Underwood Stakes at Caulfield.

Grunt appreciated the return to Flemington when successful in the Makybe Diva Stakes on September 15 and Price sees the 1800m as ideal for the lightly raced four-year-old.

“He hasn’t put a foot wrong since his Flemington win so I think he’ll race very well.

“But it will be interesting to see how Ollie (Damien Oliver) rides him from 10 out of 10 given that the race could easily be controlled from the front.

“We won’t be tying him down with any instructions as at the end of the day he’s got to make his own decisions.”

Grunt has raced twice previously at Caulfield finishing out of the money on both occasions.

Each race was over 1400m, at weight-for-age, and Price is fearful Grunt will be labelled a Caulfield failure if he is again beaten on Sunday.

“If he gets beaten everyone will be saying it’s his hoodoo, but there might be circumstances around it,” Price said.

“Stepping up in distance I’m less concerned about him at Caulfield.

“Over 1400 metres, those races can be a bit of a sit and sprint which is not ideal for him as he likes to get out and finish strongly.”

Grunt is the $3 favourite for Sunday’s race with Humidor second pick at $3.80 and Godolphin visitor Blair House next best at $5.

Price has healthy regard for Blair House as well as his English trainer Charlie Appleby.

“Given that he brings the right horses here and they stand up under pressure I would say he might be the one to beat,” Price said.

“So I would think Grunt wouldn’t want to be giving it too big a start.

“But I think it’s a little dangerous to bowl forward and get stuck and he (Grunt) seems to be a horse that is a good finisher so I think it would be a bit dangerous to sit outside the leader.

“At the end of the day Ollie’s out there riding, not me.”