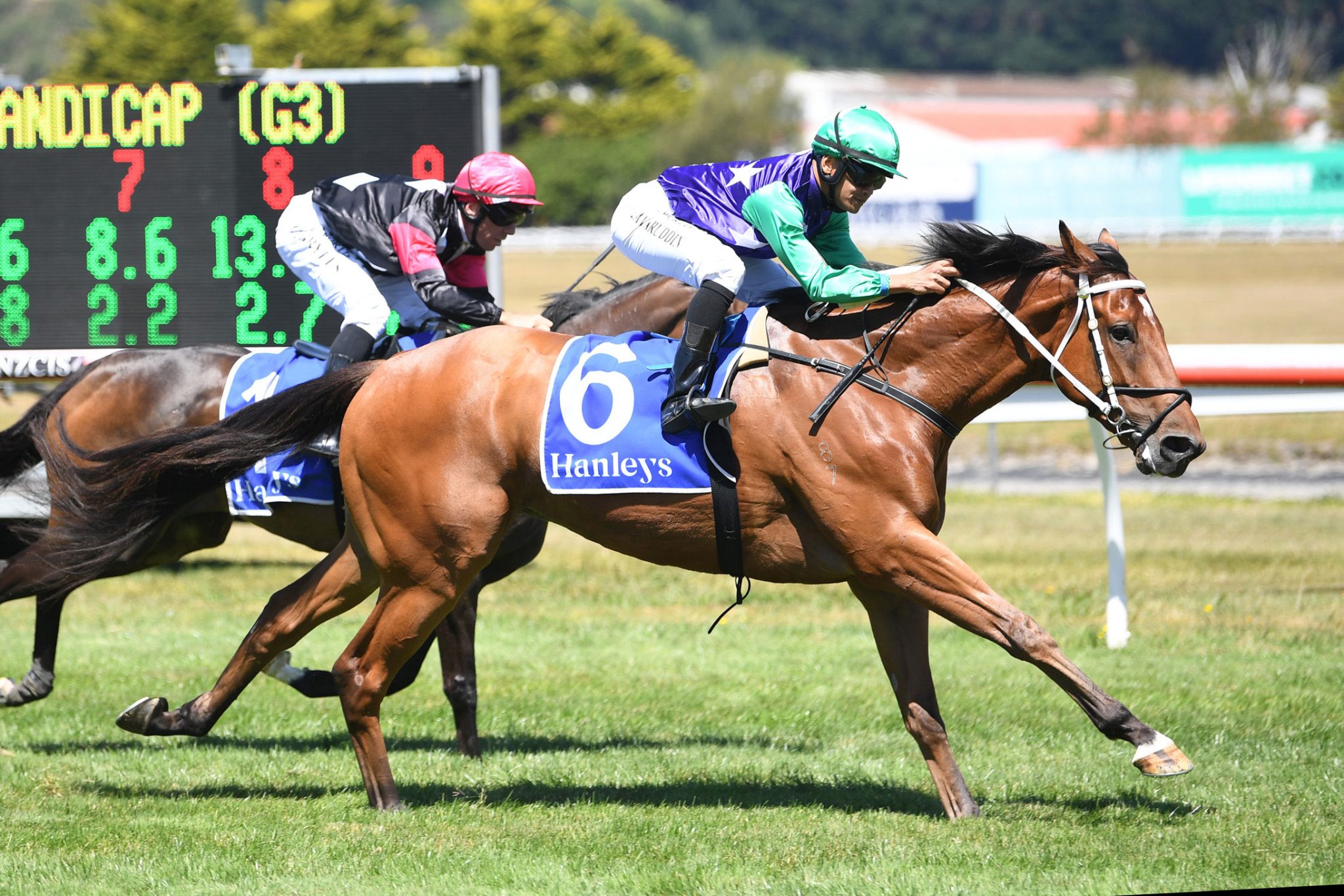 Exciting galloper Bankers Choice showed he is well on his way to becoming a star of New Zealand racing with a last to first performance to take out the Group 3 Dixon & Dunlop Anniversary Handicap (1600m) at Trentham on Saturday.

Trainer Stephen Marsh had been in two minds about where to start the talented performer during the week with an engagement at the Tauranga meeting on Friday also an option for the four-year-old son of Mongolian Khan.

Marsh has handled Bankers Choice with kid gloves through the early stages of his career as he matured both physically and mentally and decided to throw him in the deep end on Saturday in his first major trip away from home.

“He is a horse that has needed time to learn what it is all about and to strengthen physically to be able to put the talent we know he has on the track,” Marsh said.

“We had the option of staying closer to home at Tauranga or taking the plunge to send him to Trentham and tackle stakes company.

“We rolled the dice, with my foreman Rhys Mildon travelling down with the horse to keep a good eye on him and make sure everything went as smoothly as possible.

“The horse did everything right, especially on the track as it is no mean feat to come from last off a slow tempo and win as impressively as he did.”

With regular rider Michael McNab struggling to make the 53kg weight carried by Bankers Choice, Marsh turned to in-form apprentice Joe Kamaruddin for the ride and he produced a superb effort to land the victory.

Allowed time to find his feet early on, Kamaruddin kept his mount relaxed and travelling easily before setting him alight at the 400m. Bankers Choice responded with a sustained burst of speed that carried him past topweight Coventina Bay for a comprehensive three quarters of a length win with Germanicus finishing on well for third.

“Unfortunately, Michael wasn’t going to be able to get down to the 53kgs after being off for a while on suspension, so we went for Joe, who has been riding well of late,” Marsh said.

“He produced a very cool effort that was just what was required. Full credit to Coventina Bay as she was carrying 60kgs, but I’m just thrilled for owners Ross and Corrine Kearney that we could get the job done.

“They have the dam and a half-sister to this guy at home, so to be able to put a Group Three win into the family bloodlines is huge for them and I think the way he has won, that it won’t stop there.”

Marsh is undecided as to where the horse will go next, preferring to get him home safely and monitor his recovery rate from the trip away.

“His biggest trip away before this one had been to Auckland, so I don’t want to make any concrete plans until he has come home and had a few easy days in the paddock,” he said.

“We may come back for the Thorndon Mile (Group 1, 1600m) in a fortnight or we may just take our time and look at some other options for him.

“If he does keep improving, I think he is the type of horse you could see in Brisbane for the winter carnival later on this year.”

Bred and raced by the Kearneys under their Okaharau Station banner, Bankers Choice is the younger half-brother to talented Carl Henderson-trained mare Jodelin Gal, who will attempt to add further black type into the family in the Group 2 Westbury Classic (1400m) at Ellerslie next Saturday.

The first three across the line were all by Windsor Park Stud stallions, with Shamexpress the sire of Coventina Bay and Rip Van Winkle the sire of Germanicus.

Shamexpress was also in the headlines after his son Shamus landed the Group 2 Life Direct Wellington Guineas (1400m) to maintain his unbeaten record.

Bankers Choice’ sire Mongolian Khan will be represented by nine individuals at the New Zealand Bloodstock National Yearling Sale at Karaka in March.