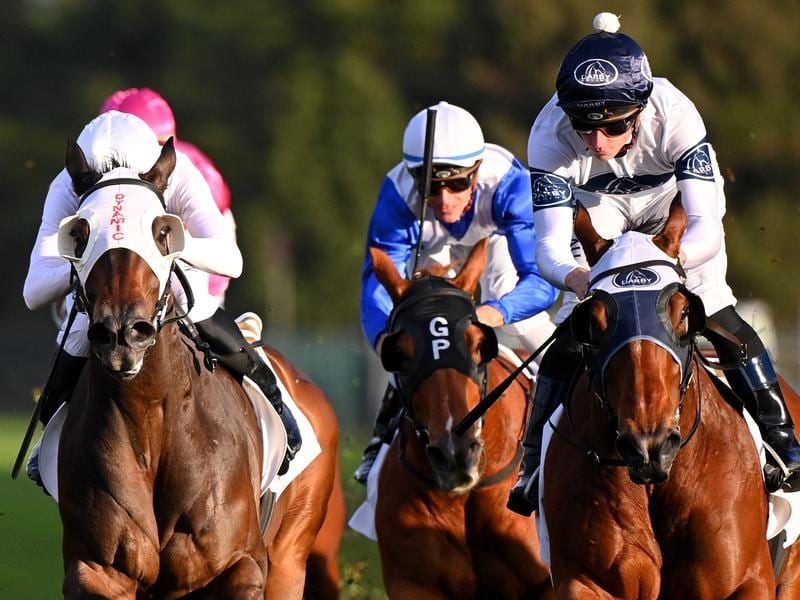 Trainer Bjorn Baker has long coveted a win in the Dark Jewel Classic and he has finally got it with tough-as-nails mare Irithea.

The race took a different shape this year, moved from its traditional Scone venue to Rosehill due to COVID-19 protocol restrictions but was no less thrilling.

Dominated by the horses on-speed, Irithea ($7.50) chased down race leader Ready To Prophet ($61) with Into The Abyss ($18) making late ground to split the pair.

“When she can take a sit and roll along I think she is at her best and it really worked out well today,” Baker said.

“I have always wanted to win the Dark Jewel, I just didn’t think it would be at Rosehill.

“It is obviously the race of the carnival and I’m very excited. She has been a stable stalwart, Irithea, and she always puts her best effort in.”

Irithea holds a nomination for the Group One Stradbroke Handicap and Baker has not ruled out heading to that race but says the Dane Ripper Stakes is also on the table.

“She is still in the Stradbroke and we would have to think about a race like that now to take her to the next level,” Baker said.

“There is also the option of the Dane Ripper Stakes a week later, so she will definitely be going to Brisbane.

“We will have a think about which is the best option.”

The victory gave James McDonald a treble after earlier success aboard Macroura in the Listed Woodlands Stakes and Adelong in a benchmark handicap.

It took him to 84-1/2 city wins this season, almost 10 clear of Nash Rawiller but McDonald said a premiership title was not on his mind.

“There was a genuine speed so I was happy to take a sit.

“She was quick out of the stalls, she crossed them early and was able to get a good break mid-race.

“I was actually worried about picking the leader up given she had a soft time in front but my mare dug deep and was able to win.”

John Thompson, who earlier claimed the Denise’s Joy Stakes with promising filly Fiteuse, was happy with the effort of Into The Abyss but said the result was bittersweet.

“She deserves a stakes success. This was her third second placing in a stakes race,” Thompson said.

“There is a race in Brisbane in two weeks that we will look at for her.”