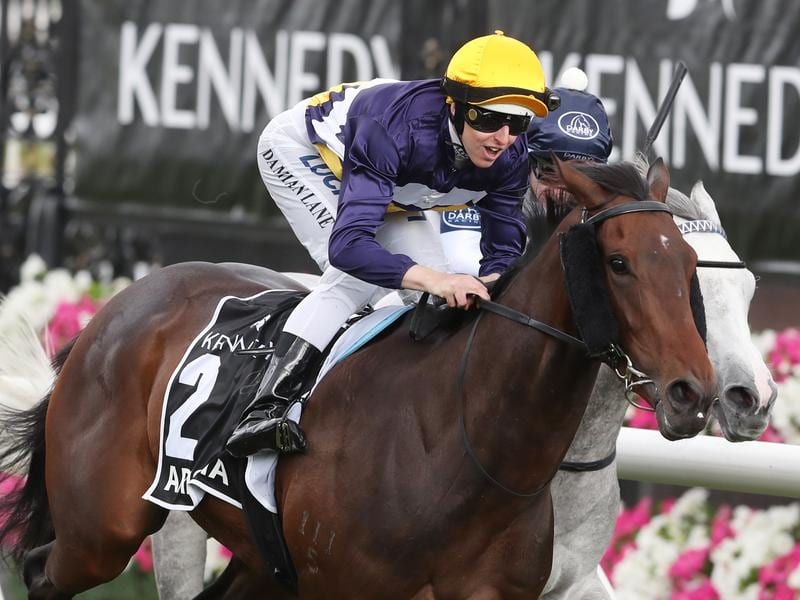 Aristia continues her build-up towards a shot at another Oaks while gaining extra experience racing right-handed when she runs for the second time in Sydney.

The winner of the VRC Oaks at Flemington in the spring, Aristia is on a path to the Australian Oaks at Randwick on April 13.

Saturday’s Group One Vinery Stud Stakes (2000m) at Rosehill is the next step towards that goal.

Trained at Flemington by Mathew Ellerton and Simon Zahra, Aristia returned to her Melbourne stable after finishing third behind Verry Elleegant and Seabrook, again rivals on Saturday, in the Phar Lap Stakes (1500m) on March 16.

It was the filly’s second start since her VRC Oaks win in November and her first in Sydney.

“She’s now had the experience of going that way which was probably noticeable the other day as she got out wide and a bit unbalanced,” Zahra said.

“So she should improve off that.”

Although Aristia returned to Flemington after the Phar Lap, Zahra said she was likely to stay in Sydney after Saturday.

“One of the reasons we brought her home is they’re better off in their own environment,” Zahra said.

“Then if you need to tweak something it’s easy to do because if they’re away you can’t see it.

“We’re pretty happy with where she’s at and she looks better in condition than before her last run, but we’ll see how she pulls up before deciding where she goes.

“Mathew’s got the sales on up there so he can be there every day and keep an eye on her.”

Zahra sees the step to 2000m as ideal for Aristia who has had two tries at the distance, running second to Verry Elleegant in the Ethereal Stakes at Caulfield before winning the Wakeful Stakes at Flemington.

Those two runs came in preparation for the VRC Oaks.

“She looked like she wanted more ground the other day, looking a little one-paced, so this is the right distance,” Zahra said.

“The jar out of the track is perfect also.

“If she gets beaten, it’s because she’s not good enough.”